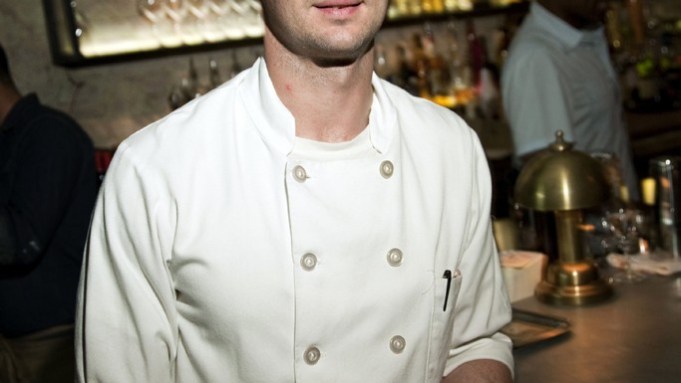 There is an eagerness to please at Ken & Cook that is kind of irresistible.

On a recent visit to the new “industrial brasserie” on Kenmare Street, there were two hosts waiting outside, ready to swing the doors open and welcome you inside. Servers responded to menu selections with smiles, suggestions and affirmations. There was no pretention and no fuss — which was interesting, considering the French-inspired restaurant, once home to Travertine, comes from two former employees of Jean-Georges Vongerichten’s empire. Richard Diamonte, former executive sous-chef at Jean Georges, partnered with Artan Gjoni, who used to work for Mercer Kitchen and Norwood.

Ken & Cook is the kind of place where you’ll go to be seen, as most tables are visible from the front door. During a preview dinner last week in the 65-seat space, diners’ eyes followed Emma Watson as she was escorted to a table. Model Hana Soukupova sat in the middle of the dining room with friends and Terry Lundgren and Jason Binn were by the doorway, allowing Binn, who seems to know everyone anyway, a convenient reception line. Salman Rushdie, Helen Lee Schifter and Carlos Mota also stopped in. And it seems the staff was equally helpful to those without a famous last name or reservation. When one woman, who claimed she lived in the neighborhood, stopped in on a whim, a host whispered, “Don’t worry, head to the bar. We will try and seat you.”