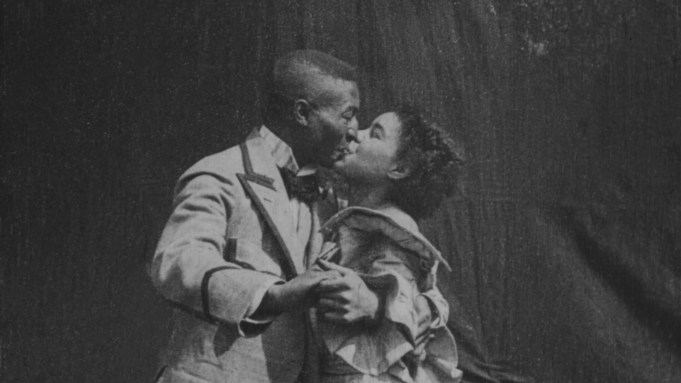 About midway through the Academy Museum exhibition “Regeneration: Black Cinema 1898-1971,” which opens Sunday, is a wall of 51 glamour shots of actors and musicians working in Hollywood from the ’20s to the ’60s.

Amid the ingenue eyes, coiffed hair, perfect smiles and serious movie star gazes there are some who jump out — Lena Horne, Eartha Kitt, Hattie McDaniel, Sammy Davis Jr., Harry Belafonte and Sidney Poitier among them.

There are many others who are lesser-known but no less deserving, including Herb Jeffries, Hollywood’s first Black singing cowboy who started out in so-called Black-cast “race movies,” aimed at Black audiences. (The cowboy boots he wore in the 1937 film “Harlem on the Prairie” are in the show.)

Or Nina Mae McKinney, sometimes called the “Black Garbo,” who was signed to a five-year contract at MGM in the ’30s, but moved to Europe after being unable to secure any leading roles.

There’s also Hazel Scott, a jazz virtuoso signed with RKO who turned down the first four roles offered to her as a singing maid, deciding to only play herself in musicals instead, and going on to make history in the ’50s as the first Black woman to host her own TV show.

Open through April 9, 2023, “Regeneration” presents a more inclusive history of Hollywood by shining a light on the achievements of these stars and many more using film clips, posters, photographs, costumes and props.

“The bottom line is this work had to happen, it’s overdue,” director Ava DuVernay, who is an Academy member and was a curatorial adviser on the show, says during a press preview. “This exhibition showcases the generations of Black artists whose shoulders we stand on, artists who rebelled against norms and notions of who they could and should be. Their very presence on-screen and behind the camera was an act of revolution, a cultural, political and emotional victory that has echoed through generations, a triumph that transformed the way we as Black people saw ourselves and the way we were seen.”

“Regeneration” opens just a month after the museum appointed as its new director Black film historian, author and TCM host Jacqueline Stewart, who was previously the museum’s chief programming officer.

“I’ve been working on Black film history my whole career and it’s beautiful to see it presented in such an elegant and large-scale way in this exhibition,” she says.

Among the highlights are a Helen Rose-designed gold glamour gown worn by Horne in the 1943 film “Stormy Weather,” and tap shoes worn in the film by Harold and Fayard Nicholas, whose final dance sequence had them leapfrogging down stairs into splits. Fred Astaire called it the greatest musical number of all time, but racism prevented the brothers from ever getting roles like he did.

“There’s a history of glamour, but that glamour was hard won and it’s important for people to recognize for Lena Horne to get where she got, she worked in race movies first and was performing in clubs; it took a lot of effort and fighting against a lot of forces,” says Stewart.

The exhibition begins by positioning Black people at the dawn of film history, with two versions of a clip from “Something Good — Negro Kiss,” an 1898 silent movie starring vaudeville performers Saint Suttle and Gertie Brown in a joyful scene that counters racist stereotypes and caricatures of the time.

“Going all the way back to 1898, you see Black people saying, ‘we’re going to use this new technology to assert our humanity,'” says cocurator Rhea Combs.

A second gallery further lays the groundwork for the importance of representation by presenting photos and quotes from early 20th-century Black thinkers, alongside performances by vaudeville stars such as Bert Williams.

Despite the fact that he had to appear in black face and often play subservient roles, the actor found mainstream success in the “Ziegfeld Follies” and appeared in an unfinished 1913 silent feature film titled “Lime Kiln Club Field Day,” which is on view following a recent restoration by the Museum of Modern Art. “Bert Williams has done more for the race than I have. He has smiled his way into people’s hearts. I have been obliged to fight my way,” reads a quote from Booker T. Washington.

A poster and White House screening invitation for D.W. Griffith’s “Birth of a Nation,” as well as the original paper program featuring imagery of clouds gathering around the U.S. Capitol building, are reminders of the racist political forces at work then — and now — which Black people had to battle.

By contrast, pioneering independent filmmakers like Oscar Micheaux, and the more than 150 companies throughout the country that made Black-cast race movies aimed at still-segregated Black audiences in the ’20s and ’30s, offered a vibrant diversity of storytelling. A gallery of poster art from “The Bronze Venus,” “Two Gun Man From Harlem” and “Black Gold,” showcase this fertile period of creativity, inspired by and inspiring to Black communities.

The end of the silent era and the beginning of talkies opened up more opportunity for performers, many scouted from Harlem’s nightclub scene. Some appeared in “soundies,” three-minute precursors to music videos shown in bars and restaurants on freestanding projection cabinets resembling jukeboxes, one of which is on display. Other performers went abroad to seek fame, including Josephine Baker, who is spotlighted.

In the ’40s and ’50s, Hollywood musicals became star vehicles for Horne, Dorothy Dandridge, Sammy Davis Jr. and others, but the range of roles and storylines were still limited.

Even the most recognized stars of the golden era of Hollywood, such as Hattie McDaniel, the first Black person to win an Oscar, for best supporting actress, faced complex realities. When she attended the ceremony at the whites-only Coconut Grove, she was seated separately from the rest of the “Gone With the Wind” cast. Some have criticized her, too, for perpetuating stereotypes in her work, to which she said, “I’d rather play a maid than be one.”

Black cinema began to change in the ’60s with the dismantling of the studio system and the rise of the Civil Rights Movement, which was supported by Belafonte, Ruby Dee, Paul Robeson and other Black stars.

A range of stills and clips from a new generation of Black filmmakers including Gordon Parks and Melvin Van Peebles represents a new era made possible by long-fought freedom struggles.

Sidney Poitier’s work, documented in stills and posters, signaled the ascendance of a new kind of Black movie star, one who was free to take on all kinds of roles, including leading man.

“It was a conscious decision to combine people you might know, like Josephine Baker and Sidney Poitier, along with people you should know more about,” explains cocurator Doris Berger. “It’s our level-setting moment.”