"The founders of the Academy envisioned a movie museum 90 years ago," said museum director Bill Kramer.

A view of the Academy of Motion Picture Arts and Sciences Museum.

The Academy Museum of Motion Pictures seized on the timing of Oscars weekend to stage a media preview Friday of the Renzo Piano space opening later this year in Los Angeles.

Museum director Bill Kramer welcomed guests to the lobby of the 1939 Streamline Moderne-style May Company Building, which has been renamed the Saban Building in honor of the Saban family donors. Outside, the distinctive gold-tile cylindrical facade has been restored to its former glory on the corner of Wilshire Boulevard and Fairfax Avenue, across from a new Purple Line metro stop that will connect Museum Row to downtown L.A.

“The founders of the Academy envisioned a movie museum 90 years ago,” Kramer said, noting that at last, their dream will come true. With a factory-like, industrial aesthetic familiar from Piano’s Pompidou Center in Paris, the lobby of the main building will feature a retail store with Academy and Oscars souvenirs, fine art and books. There will also be a restaurant serving grab-and-go as well as sit-down meals for lunch and dinner, with windows facing out to Fairfax and Wilshire. (The restaurant partner will be revealed at a later date.)

Also in the main building: the Spielberg Family Gallery; the 288-seat Mann Theater, which will have a Federico Fellini retrospective as its first slate of programming; the Shirley Temple Education Studio, and four floors of exhibition space.

Core exhibitions will celebrate significant moments in cinema history, including “people who were famous in Hollywood and those who were excluded,” said a curator. “We won’t shy away from the complicated history of the industry.” Scripts, props, costumes and more will be part of the narrative.

Another gallery will be dedicated to the collaborative history of cinema (screenwriting, editing, makeup, sound, music composition) by highlighting a single film, the first being 1939’s “The Wizard of Oz.” And yes, the ruby slippers will be on display. Sci-fi and fantasy films will be explored in another space. The first temporary exhibitions will celebrate Japanese animator Hayao Miyazaki, and the history of black cinema from 1900 to 1970.

The museum’s second building is a dramatic floating sphere, comprised of 26 million pounds of concrete, glass and steel atop four plinths, with a public piazza underneath. It was designed to be floating as an homage to the transporting power of movies, Kramer said. Inside the sphere, the David Geffen Theater has 1,000 seats and the stage is big enough to accommodate an orchestra. Referencing movie palaces of old, the seats are plush velvet and red carpet-red.

Up top, the other crown jewel is the Dolby Terrace with expansive views of the L.A. skyline from the Getty Museum to the Hollywood sign, underneath 1,500 panels of glass from Austria. What a place for a fashion show it would be.

The museum has long been beset by delays and cost overruns, but Academy of Motion Picture Arts and Sciences president David Rubin said in late January it had reached 95 percent of its funding goal. The 2020 opening date will be revealed in the coming months. 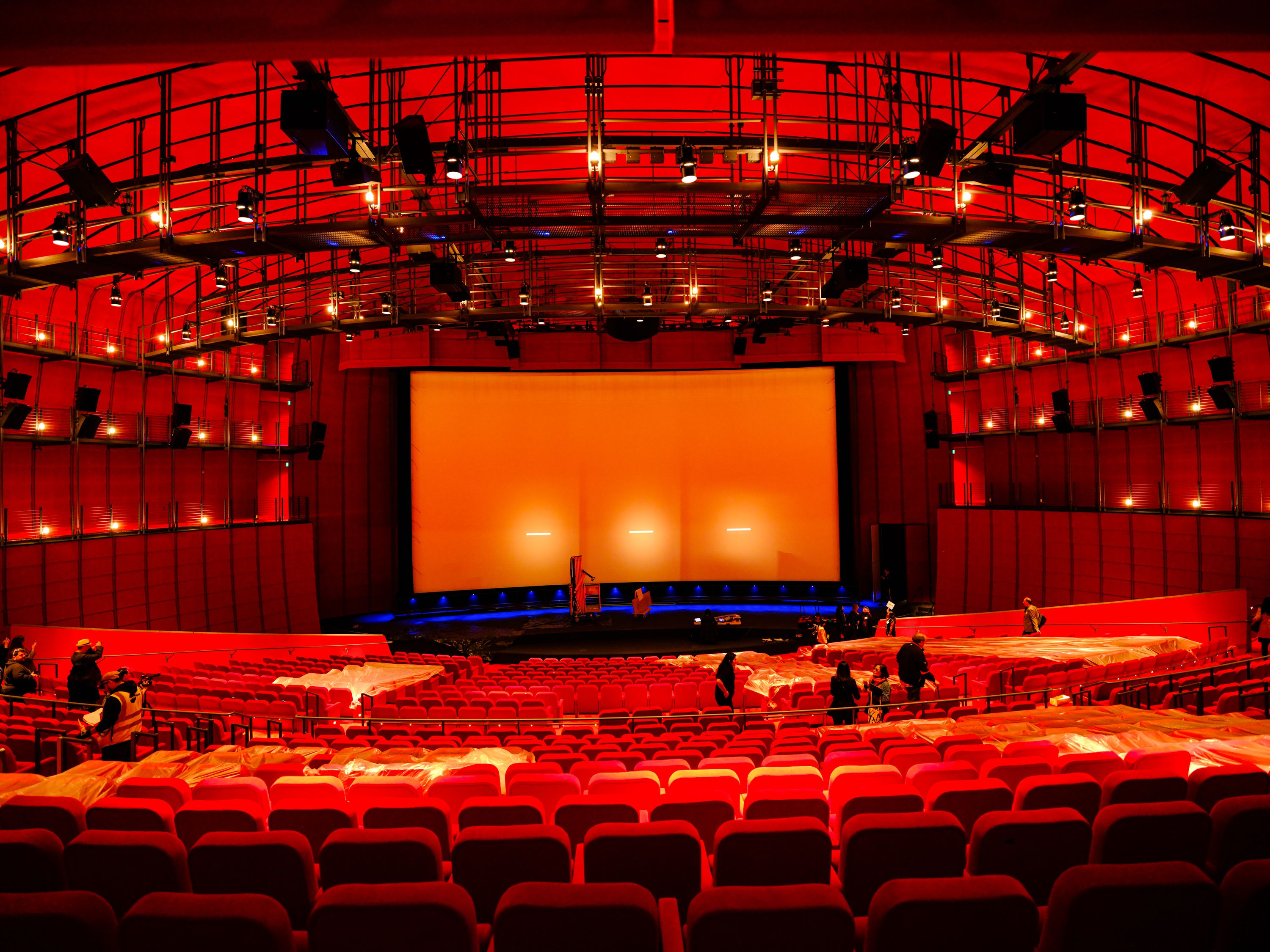 Inside a theater at the Academy of Motion Picture Arts and Sciences Museum.  Michael Buckner/Variety/Shutterstock 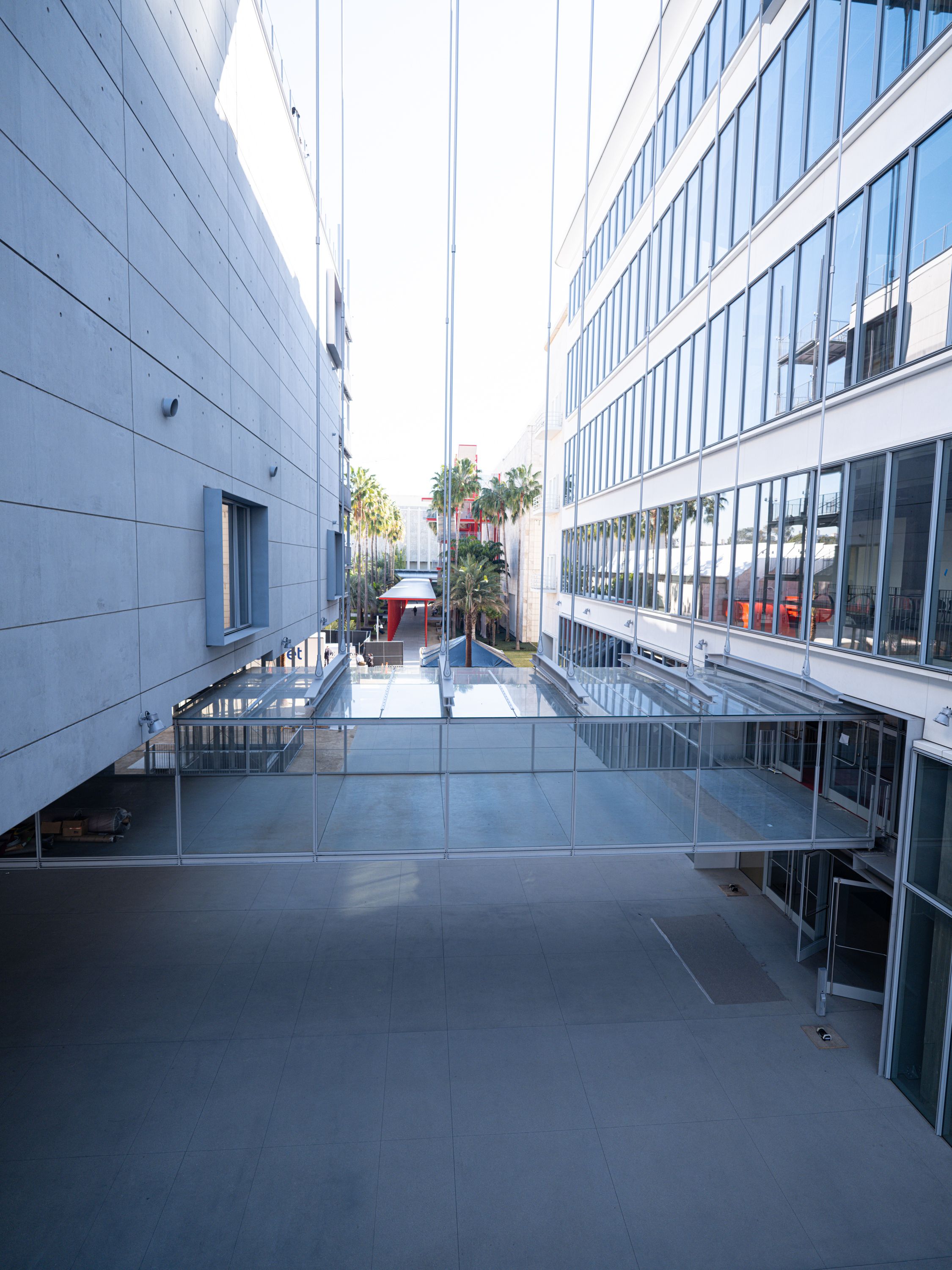 An exterior view of the Academy of Motion Picture Arts and Sciences Museum.  Michael Buckner/Variety/Shutterstock