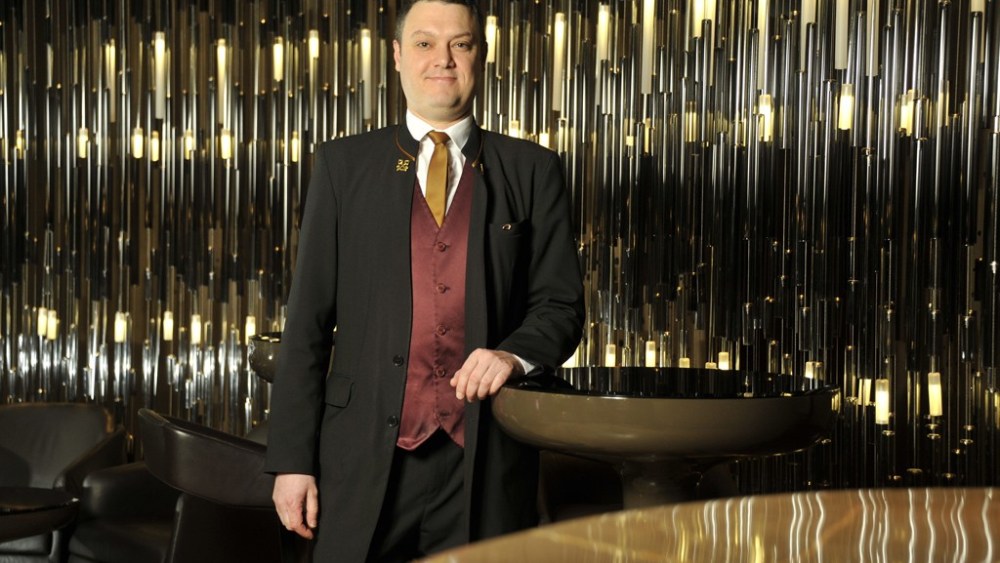 As one of Paris’ original food bloggers, Adrian Moore is a walking, talking black book when it comes to the city’s hottest tables and watering holes. Interviewed while on duty in his day job as assistant chef concierge at the Mandarin Oriental, Paris, Moore — clad in his formal uniform of a redingote, vest and tie — came across as ultraprofessional and surprisingly mild-mannered, considering his bad-boy-blogger reputation.

An unrelenting gourmet, Moore can turn tart when disgruntled, peppering his blog entries (at adrianmoore.blogspot.com) with entertaining jabs aimed at restaurant staff, the locals or the decor. Take his recent review of Paris-based Indian restaurant Marcel, delivered in a series of iPhone notes: “Another ‘why do I do this to myself’ moment,” he wrote. “More A.P.C. per square inch than an architect’s office; sneaking suspicion the basmati rice was that Uncle Ben’s stuff you find on [French supermarket] Monoprix shelves; Amy Winehouse on loop; people tripping over the carpet every four seconds; annoying and pervasive loud crowd murmur.…I wanted to like it as it’s in my hood, has a cozy decor and seems to be busy every night. But, as soon as I took in the ambiance and food, I knew it was all going south.…”

According to Moore, who is a bit of a bloodhound when it comes to sniffing out new tables here, an expanding family of first-rate expat chefs continues to invigorate the local culinary scene. “Expats, as well as French chefs who have lived and trained abroad and brought the experience back with them,” specified Moore, who currently has his nostrils turned to the latest project by Passage 53’s Guillaume Guedj. He’s preparing to open a new concept in Japanese dining here, with chef Shinichi Sato at the helm.

“It will be about quality and affordability, a fresh approach to quick gourmet Japanese eating,” says Moore, his eyes a-twinkle. Among other fresh initiatives tickling his taste buds is gourmet burger van Le Camion Qui Fume (or “The Smoking Truck,” in English), the brainchild of Kristin Frederick, an Ecole Supérieure de Cuisine Française Ferrandi-trained Californian chef. While food trucks are a dime a dozen in Britain and America, they’re not so common in the land of three-hour lunches, and Frederick’s burgers — at 10 euros (or $13.10 at current exchange) a pop with fries — attract the city’s young trendies in droves.

The van pulls up at lunchtime in three different spots around Paris, with a delivery service due to launch this month. “The French have never been able to create a greasy, American-style burger. For a real burger, you need about 20 percent fat. [Frederick] actually adds about 20 percent fat. She uses three different meats and hand-mixes it herself, and makes the patties herself,” says Moore. “The bread is artisanal. It just tastes like a greasy, American-style burger, whereas any French burger is too lean.”

Here, as 2012 begins, the food critic shares a selection of his favorite new restaurants, bars and cafes linked to the expat trend, along with a few of the dishes sampled.

L’OFFICE: “This changed hands a couple of months ago and is really up-and-coming, I think. It has foreign chefs, [New York City’s Kevin O’Donnell and Michael Lombardi, who formerly worked at Mario Batali’s Del Posto]. The owner, Charles Compagnon, ran a few of the Costes restaurants, like Lily Wang, and was precise and market-based. It’s just this funky little storefront, really well-decorated, really interesting people and very much a product-driven French cuisine, using whatever is best on the market, with a completely new menu every day. The starter I had was almost a riff on a breakfast: a slow-cooked hen’s egg with braised pork belly and a tomato [jam] that was like the most luxurious ketchup you’ve ever eaten. There was roast chicken with chanterelle mushrooms and this really interesting pot-au-feu, sort of osso buco kind of thing, where they had replaced the pork with organic veal. Normally it’s a soft, soupy kind of dish and they had introduced crunchy vegetables into it, giving a little bit of a different feel. Easy, simple stuff slightly reinvented, very good value for money.”

AKRAME: “A new table by French-Algerian chef Akrame Benallal. In terms of creativity, it’s probably the most interesting table I’ve tried this year in Paris. He’s completely self-taught and has worked with some of the biggest chefs in the world, which you can see in his technique. He worked at elBulli [in Spain] and Pierre Gagnaire. One of the dishes I had, when they announced it as a deconstructed chicken taco, I thought, Here we go again, I don’t think I’ll eat it. But, oh, it was fantastic. It was minced breast of chicken with some sort of coriander foam and a sprinkling of hyper-flavorful corn dust. If you tasted any one of those apart, it wouldn’t have done much. But you get all of that in a spoon and, you know, you have the impression you’ve attained the nirvana of taco-ness. It was absolutely delicious. He changes his menu every single day. It’s absolutely insane.”

COMPAGNIE DES VINS SURNATURELS: “A new bar by the owners of Experimental Cocktail Club, Curio Parlor and Prescription Cocktail Club, based near the Marché Saint-Germain-des-Prés. The difference with this wine bar is that they serve some of the world’s best grands crus by the glass. They also offer artisanal charcuterie, Spanish hams, such as Pata Negra, and cheeses ­— a comfort-food menu. I’m also really looking forward to seeing what happens with the people from the Hemingway Bar when the Ritz closes for refurbishment, especially [head bartender] Colin Field.”

NEXT: Au Passage, Merce and the Muse >>

AU PASSAGE: “Very simple market-based food, again. The Australian chef, James Henry, used to work at Spring, which has turned out to be a real factory for [amazing] offshoot tables. It’s this cool little place that’s far from any metro, on a little road filled with nothing else but ironmongers and silversmiths. They have a three-course menu for 16.50 euros [or $21.50], which is unbeatable. I had arctic char, a fish that’s quite in vogue on menus in France at the moment, served raw, carpaccio style, with just some onions and very little spices. The main dish was also a fish dish, with leeks and onions — very simple but absolutely delicious. Even in top-level gastronomic restaurants you don’t often find fish of this quality. Lunch is a market-based menu, and in the evening they serve tapas.”

MERCE AND THE MUSE: “Merce is a New York film school graduate who opened a coffee shop because she couldn’t find a New York-style coffee shop anywhere in Paris. The guys behind The Prescription Cocktail Club [Romee de Goriainoff, Olivier Bon and Pierre-Charles Cros] financed her, put up some capital, and she found this funky little New York loft-style place in the upper Marais district, just off the Carreau du Temple. She imported coffee from The Coffee Collective in Copenhagen, which is some of the best coffee in the world, and started doing organic salads, quiches, pastries and the coffee. And it’s been a huge success. That sort of started off the trend for artisanal coffee in Paris. Now you’ve got Coutume Café, for the best coffee, hands down, in Paris — sourced from fair-trade, single-origin beans, roasted on the premises and cupped by world-class baristas. Other great coffee joints include the Caféothèque de Paris, run by Gloria, a former Guatemalan ambassador to France; Le Bal Café in Clichy, doing head-to-tail modern British cooking, and fantastic coffee, as well, and Kooka Boora Café, doing great, expertly made coffee.”