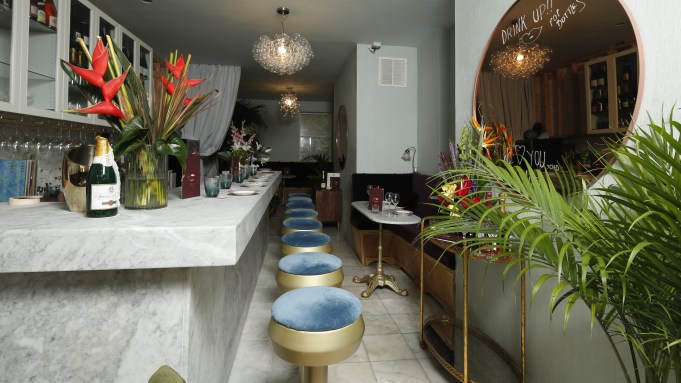 The new restaurateur is hoping to change that perception, making Champagne accessible for everyday libations with the opening of Air’s Champagne Parlor in Greenwich Village.

“It’s just such a sophisticated, thoughtful region of winemakers,” says Arce of her affinity for the French wine region. The 29-year-old is wearing a bomber jacket with “Champagne” embroidered on the back, as well as a white miniskirt and sneakers with lips embroidered on them, which is the Parlor’s logo, a decidedly feminine detail. “I also feel that Champagne is such a sensory product. It’s a wine that is very much affected by the environment, by the music, by the aromatic focuses of the wine. So we really wanted to create a place where you’d be able to kind of indulge in that.”

The interior was designed by Arce, who found pieces and textures she liked — glass bubble chandeliers, a cute effervescence reference; velvet upholstery in muted tones; dainty plate ware, and gold-accented furniture. While Champagne is the focus, the establishment will also serve sparkling wine, still wines, cocktails and beers. The staff is emphasizing accessibility and approachability, “So that we can break down the barriers and the misconceptions of Champagne,” says Arce. “We have two mottos here: one is be cool, and be nice to everybody, and the other is really be yourself. The message here is we’re trying to give an experience that’s very welcoming and very hospitable.” Small plates, as well as oysters and caviar service, will also be on offer.

The New York City native — she grew up in the West Side Hell’s Kitchen neighborhood — spent the early years of her career in Chicago working for chef Grant Achatz’ Alinea Group before landing at Champagne bar Pops, which is where she developed her knowledge and affinity for bubbly, and established connections with growers and producers in the region. Back in New York, she helped open Birds & Bubbles on the Lower East Side before landing as wine director at Riddling Widow, which previously occupied the 127 Macdougal location. Despite the convenience of opening her project within a space she already knows, it was also fitting.

“Greenwich Village has such a deep relationship to music, and counterculture,” explains Arce as her boyfriend, the Brooklyn chef Greg Baxtrom, helps put finishing touches on the space. “I think Champagne, even though we have such a strong perception of what it is, it really is somewhat counterculture at this moment, because there are so many young up-and-coming winemakers from the region, who are really trying to make a name for themselves,” she continues. “MacDougal Street is college kids and dive bars, and you’ve got some really excellent Michelin restaurants in the neighborhood, but you really don’t have like a glamorous place to drink over here. And so it felt really nice to do that.”