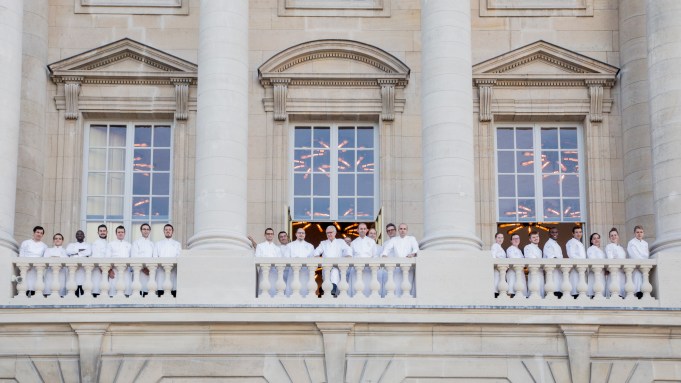 PARIS — Alain Ducasse has cause for celebration. On Monday last week, the Michelin-starred chef turned 60. On Tuesday, he opened a restaurant in the Château de Versailles.

Ore (which means “mouth” in Latin) is located in the Dufour Pavilion, which was recently renovated by French architect Dominique Perrault with Frédéric Didier, head architect for historic monuments. The Dufour Pavilion is the new entrance for individuals visitors to the palace, which greeted more than 7.5 million people in 2015.

The opening comes at a time of low morale in France, which continues to suffer from a lackluster economic climate and low visitor levels 10 months after the November terrorist attacks. Hotel arrivals of foreign visitors in Paris were down 11.6 percent from January to May 2016. “It’s important to reestablish France as a destination,” said Ducasse, noting that the project was planned prior to the November attacks.

The chef already dominates French haute cuisine and Paris quite literally, with his Jules Verne restaurant on the second floor of the Eiffel Tower. For its part, Ore boasts views onto the palace’s cour royale and cour d’honneur.

“I like exceptional locations. They require abnegation and work. We worked to be up to it,” said Ducasse, who describes Ore as a contemporary café during the daytime. It closes at the same time as the Château, which is 5:30 p.m. in the low season and 6:30 p.m. in the high season. At night, the venue is available for private events, staging dinners evoking royal splendor.

During renovations, the architects stumbled on a wall named Mur Le Vau, after the architect Louis Le Vau, in the middle of the kitchen. “We preserved it: The cooks were not happy with it but researchers were,” said Jean-Francois Casanovas, vice president of operations and development for Alain Ducasse Entreprise group, noting that it’s “an enchantment” for the teams to work in the setting of Versailles. “Sunsets are magnificent here,” he mused.

Many elements of the decor are nods to Louis XIV, the Sun King, ranging from the brass tables chosen for their golden tones to the sun-shaped modern chandelier and the white plates from Bernardaud, also marked with the solar emblem.

The menu includes traditional fare prepared by the chef Stéphane Duchiron, such as free-range guinea fowl breast. There’s no lack of healthy options, including the thin vegetable tart with green jus; the tomato salad with goat curd, and the roasted figs served with a fig leaf-infused cream.

“Marie-Antoinette’s delights” by pastry chef Arnaud Dutertre are served all day. They include chocolate soufflés featuring chocolate from La Manufacture Alain Ducasse, the Paris-Versailles and Le Louis XIV with crispy praline, resembling an antique gold bar, which is bound to be popular on Instagram. Drinks include Châteldon sparkling water. “This is the water that Louis XIV used to drink; it was recommended by his doctor,” confided a waitress in a dark blue uniform with touches of gold.

Ducasse called the process of revisiting royal dinners fascinating for the teams. “We collected [information] from the heritage officers specialized in menus, tableware, habits and customs, dinner sequencing,” he explained. “There are specialists for everything at Versailles. We drew up a synthesis to create the experience.”

It involves the costumes of the era too. “The fabrics, the buttons…Royal dinners were very chic,” noted Ducasse, who was wearing a Loro Piana suit and Brunello Cucinelli shirt. They were reinterpreted by Marine Halna du Fretay, who designed the uniforms for the dinner teams.

Dinners menus are inspired by the court and feature libations such as Dom Pérignon’s P2 Champagne, and wines including Château d’Yquem and Cheval Blanc. “Today’s wines are infinitely better than at the time. Also, it’s likely that the King ate warm to cold [food] due to the distance with the kitchen. The court was eating colder and richer than we eat nowadays,” noted Ducasse. “It’s an inspiration, not a caricature of history.”

It marks the chef’s first entry into the palace. The chef and Lov Hotel Collection were commissioned earlier this year to set up a luxury hotel comprising some 20 rooms, as well as a restaurant offering French haute cuisine, next to the palace’s Orangerie. The venue is slated to open at the end of 2018.

“It made me dream to be part of history. What we’re doing will be part of the history of the Château,” said Ducasse.