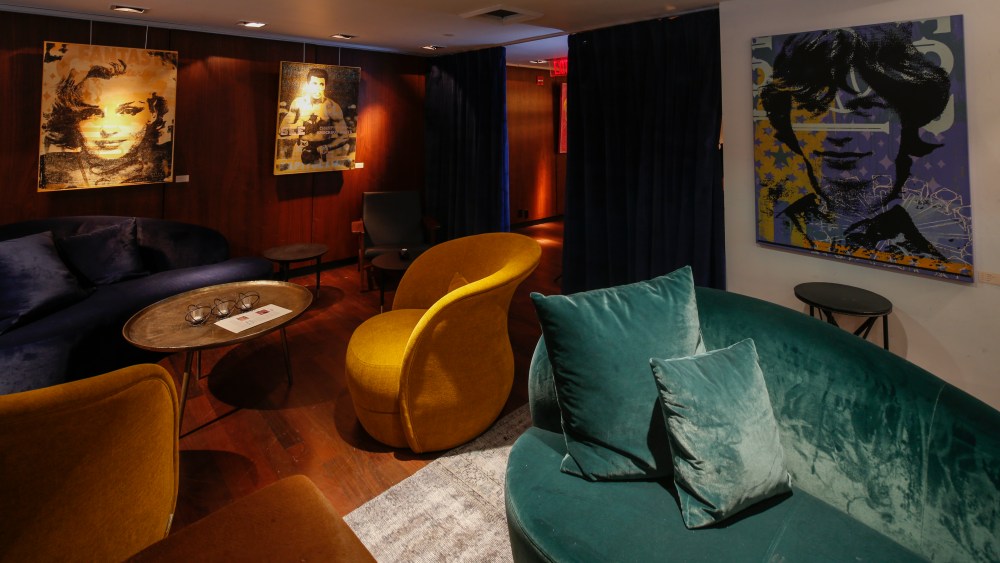 Austrian mixologist Albert Trummer — who was behind botanical-forward cocktail lounge concepts Apotheke and Sanatorium — has set up shop in the Lower East Side on the second floor of the Hotel on Rivington. S’Zen operates as an intimate lounge and laboratory for Trummer’s handcrafted cocktail explorations, as well as home to the hotel’s curated art program, Art on Rivington.

“S’Zen is very easy to explain,” Trummer noted from the moody lounge, which is outfitted with velvet Vladimir Kagan chaisses and overlooks the hotel’s bright ground-floor restaurant Cafe Medi. “It’s the scene and the zen of the cocktail, and spending the time for making a good cocktail,” he continued. “What we want to do now is take the art of the cocktail into the art and craft of the hotel.”

The lounge leans toward Japanese influences and joins the influx of omakase-centric restaurants around New York. Instead of sushi, S’Zen offers a cocktail omakase — flights of seven 1-oz. cocktails. Seats in the lounge will be by reservation-only, allowing Trummer and his staff to venture from behind the bar to serve their creations table side. Cocktail flourishes include ice hand-carved using Japanese techniques (with a samurai sword, no less). “It’s almost like a surgery when you watch this,” Trummer added. Some would call it performance art.

The international bar staff, which Trummer coins as “the apothecary guys,” build upon the ideology behind his other cocktail bars. Using family recipes from places such as Japan, Argentina, Mexico, Peru along with a mix of botanicals, they create custom cocktails geared toward specific customer ailments. (Trummer, of course, made sure to note that his bartenders aren’t actual doctors.) The menu will be seasonal — much like a farm-to-table restaurant — with cocktails pegged to the availability of ingredients: strawberries and raspberries in the summer; pomegranate, starfruit, and port wine in the colder months, for example.

S’Zen also joins the burgeoning Lower East Side art scene with its rotating art gallery. The first exhibit is, very fittingly, “Zen of Rock,” a collection of avant pop art by Peter Mars. While the neighborhood continues to shift away from the underground and increasingly to the soaring above-ground via luxury condominiums and boutique hotels, Trummer, who moved to the city 15 years ago, relishes the chance to move into an area that retains a sense of old New York City — at least for now. “I think this is the last really old New York city area here,” he noted. “As soon as the Apple store kicks in, it becomes too populated.”