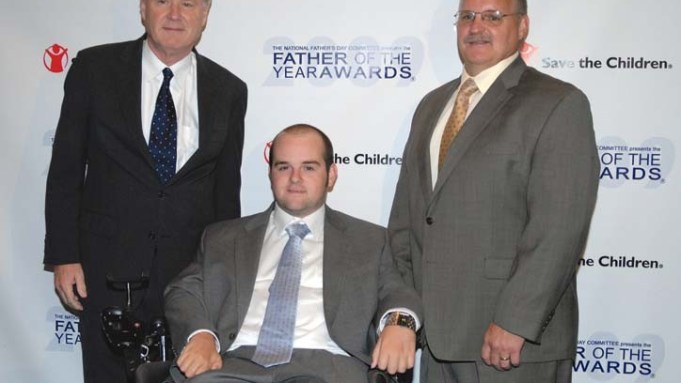 Although the room was crowded with luminaries from sports, the military, television news and the apparel industry, it was a teacher from Cape May Court House, N.J., who stole the show at the 68th annual Father of the Year Awards at the Sheraton Hotel on Thursday.

The story of Rob Wunder, the Ashok Sani All-Star Dad, prompted Duke University men’s basketball coach Mike Krzyzewski to say: “The MVP of this dais is Rob, who has shown us the meaning of true commitment and love.” Wunder, who received the award after his wife wrote an essay to Men’s Health magazine, gave up his career to care for his son, who was paralyzed from the neck down after diving into a swimming pool. Wunder is sleeping on an air mattress in his son Rob’s dorm room at Temple University and gets up every two hours to turn him in bed at night so he doesn’t get bedsores. He shrugged off the sacrifice: “What do you say, three more years and then grad school?”

In addition to Wunder and Krzyzewski, the other honorees were motor sports racing legend Al Unser Sr., ABC News’ George Stephanopoulos, Loews Corp. chairman Jonathan Tisch and Gen. David Petraeus, commander of the U.S. Central Command of the U.S. Army. Petraeus had a meeting at the White House and couldn’t attend, but sent Major Gen. Kenneth Dowd in his stead. Dowd said that for military fathers, it’s important to cherish the time they have with their families. “We’re deployed a lot and we have to work the family piece when we’re back,” he said.

Macy’s Inc. chairman, president and chief executive officer Terry Lundgren made a surprise appearance at the luncheon to honor Ronny Wurtzburger, president of Peerless Clothing, who received both Father of the Year honors as well as the Milton Margolis Humanitarian Award. Lundgren said he could attest to Wurtzburger’s love of family since the Peerless executive often leaves meetings at Macy’s to attend his grandchildren’s sporting events. In his speech, Wurtzburger told stories about his childhood and introduced his extended family, many of whom were in attendance at the event. This prompted Krzyzewski to joke: “Ron, it was nice of you to invite us to your family reunion.”

Proceeds from the luncheon went to Save the Children.