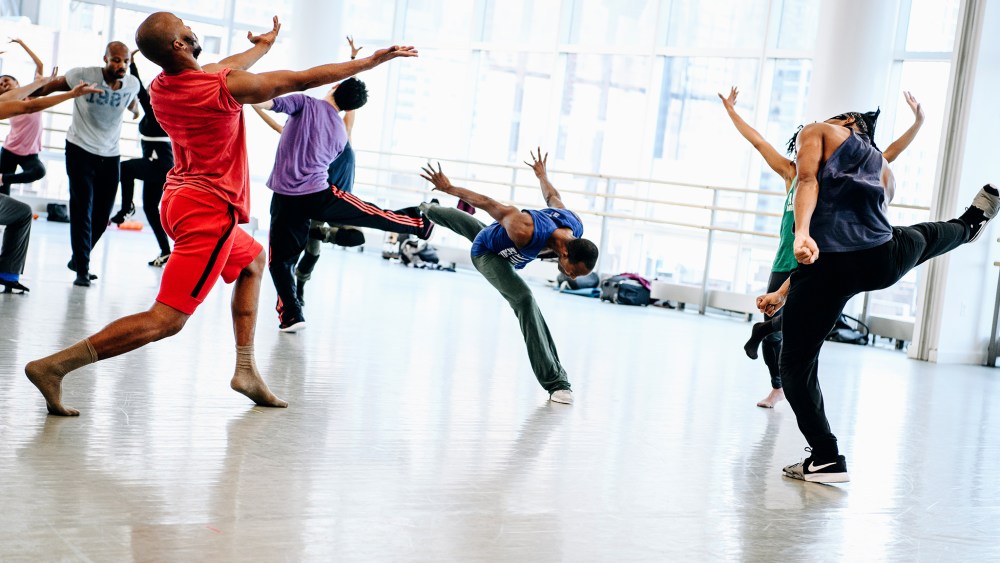 In tumultuous times like these, dance is a powerful antidote.

After a year of touring and other celebratory initiatives, the Alvin Ailey American Dance Theater is closing out its 60th anniversary season at home in New York with a slate of programming that celebrates its past, present and future. For the first time ever, the company is also running an “All Battle” program, which features work choreographed by Robert Battle, its current artistic director and the third in its history.

“Dance is for everybody — Alvin Ailey believed that firmly,” Battle says. “The wonderful thing about dance is that we have the luxury of ambiguity. Where words falter, dance sort of excels because it’s able to get a message to you in a way that doesn’t hit you over the head or ask that you choose sides.”

On a recent November afternoon, the upbeat Battle was running rehearsal of his first piece for the company, “Juba,” which he choreographed in 2003, before then-artistic director — and former Ailey dancer — Judith Jamison had asked him take charge of the company.

“It was my first piece for this company, so it was a big deal,” Battle recalls after the rehearsal, sitting in his office at the company’s permanent space on Ninth Avenue and 56th Street in Manhattan. Working with the dancers, the Juilliard-trained choreographer is soft spoken but deliberate, with an element of congeniality in the air. Watching them restage his physically demanding piece, Battle is all smiles. “I was very nervous about walking in the studio with these dancers that I’ve admired forever, knowing how talented they are. I think the reason the steps are so intense and hard was because I was nervous they’d be bored,” he adds. “I might have overshot it.”

The piece is based on its namesake percussive folk dance form brought over from Africa. “It’s a metaphor for this company; to use your body as a way to deliver a message, your body is the instrument,” Battle says.

“I don’t get to be in the studio as often because my job demands a lot of different things, so when I’m watching them it takes me back to that time and the feelings that I had, and the intensity and the freedom. There was a certain innocence, so when I’m watching it I’m sort of reconnecting to all of that, and remembering the dancers that it was originally created on. So you’re going through a kind of real dance down memory lane in a very sensory way,” he continues. “I think it’s important to go back so that you don’t become jaded.”

Keeping the spirit, voice and mission of its founder remains paramount as the company continues to grow and move forward.

“It started from one vision of one black man in this country,” he says. “When you think of the fact that Alvin Ailey founded the company on the brink of the Civil Rights Movement, that the company expresses the culture and tradition of African-Americans in this country — that was a statement in and of itself, at a time when there was discord. Not unlike now, but certainly very important at a time when you didn’t see the opportunities for dancers of color on the concert dance stage in a meaningful way.”

The key word for the company’s 60th season is “ascending,” and it has managed to not only survive in the wake of its founder’s death in 1989, but thrive. The company moved into its permanent home, the Joan Weill Center for Dance, in 2005, which boasts light-filled studios and rehearsal spaces for its main company, junior company, and dance school for professional, pre-professional and adult students. In 2016, the center expanded, adding an extra 10,000 square feet. The company also continues to prioritize outreach programs, including the AileyCamp, a summer day camp for youth in underserved communities nationwide.

“Judith Jamison — Alvin handpicked her to lead the company when he knew he was dying, and she made sure that we remembered him, that we remembered how this company started, why, what we’re about beyond the steps. So I think that kept a certain sense of continuity,” Battle says. “Alvin Ailey said it best: Dance comes from the people, and should always be delivered back to the people.”

Through Dec. 30, the company will stage new works by Rennie Harris, Ronald K. Brown and Wayne McGregor. The season will close out the year with its founder’s most recognizable work, “Revelations,” an ode to human resilience.

And perhaps the act of seeing live performance in the theater is an act of resilience in and of itself.

“It fosters community; you’re having a shared experience,” Battle says. “These connections are very important, especially in times like these. There’s something in that, that is the very glue that holds us together, I believe. There is something that is being reaffirmed in those moments, there’s something in you that opens up when you have that experience. I can’t define it, but I know it.”

The IFP Gotham Awards Proves the Race Isn’t Over Yet

‘Dior: From Paris to the World’ Opens at the Denver Art Museum