Celebrity Stylist Andrew Gelwicks on the Ambition Derived From Being Queer

Gelwicks was tired of only seeing stories about the hardships of being queer, so he set out to speak to successful people across fields about the many advantages their sexuality has provided them.

When Andrew Gelwicks was growing up in Cincinnati, he used to sit and Google “successful gay people,” knowing he was gay and, believing it to be a negative, in search of examples to prove him wrong.

Some of those very names now appear in his new book “The Queer Advantage,” which was released this week timed to National Coming Out Day, in which Gelwicks, a celebrity stylist and writer, interviews big names from all industries about ways in which being queer has been a positive in their lives.

“The idea started because I think the first 20 something years of my life, I really thought that being gay would be the biggest obstacle for me,” Gelwicks says, over Zoom from his parents’ house in Ohio, where he’s spent part of quarantine. “I’ve always been really focused on having a career and doing well and I always wanted that, but I always thought I could only have that if I can overcome being gay. If I could surpass that. And I started thinking and I was really questioning and I was like, ‘I think I have it all wrong. I think, in fact, this isn’t a weakness.’”

The 26-year-old, whose celebrity clients include Catherine O’Hara and Aidan Alexander, has written for Out, Huffington Post and Harper’s Bazaar and held stints at GQ and Teen Vogue. He’s always wanted to balance both styling and writing, but had been focusing more on styling until two and a half years ago, when he began work on the book.

“The goal was to try to change the narrative because whenever we talk about being queer, it’s always talking about the struggles and the hardships. And 100 percent, that is part of life. That is reality. We have to deal with certain things, but what about all the amazing things?” Gelwicks says. “All the great, awesome, beautiful, powerful things that being queer allows you and gives you?” 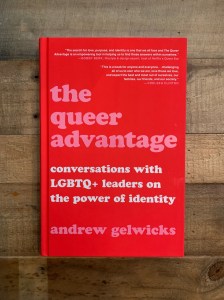 The prompt struck a chord with many of the subjects he approached.

“A lot of the people I spoke with would say, ‘Andrew, I’m really done talking about being gay. I’ve done interviews on it. I’m just trying to live my life now, but I’ve never had the opportunity to talk about the positives of it. So that’s why I’m doing this interview,’” Gelwicks says.

Gelwicks credits his sexuality with being a motivator in his professional life, saying being gay made him that much more determined to prove himself.

“It was a huge accelerator of my ambition. I think especially in fashion and more specifically celebrity styling, you’re dealing with people’s emotions and their personalities and really trying to make people feel the most comfortable. And as a queer person, I’ve been trained to do that since kindergarten,” Gelwicks says. “I’ve been trained to go into a room and assess the situation and figure out how to make other people feel more comfortable with me.”

He highlights a moment from his interview with musician Troye Sivan, where Sivan told him that he feels queer people spend “so much more time in their heads,” questioning why they feel certain ways.

“I absolutely resonate with that,” Gelwicks says. “And that’s helped me in writing and thinking things through and being able to kind of process my emotions or a situation. It’s also really helped with my creativity because I spent so much of my time in my head. These are a few of my queer advantages.”

Gelwicks says living authentically has been a work in progress for him, but he’s hopeful his book will provide some inspiration to anyone who is struggling to embrace their voice, especially in the current news climate.

“I think it’s an interesting time because it’s coming out right after National Coming Out Day and right before the election. I want the focus again to be on the positives and how we use our identity as a launchpad and as our rocket fuel and as our superpower,” he says. “So especially when you’re looking at the election and how indescribably important this one is, if you’re able to use your full identity and look at yourself and think about what you want, what you need, the positives that come from that would propel you to really go out and change and vote and talk to your friends and just not be stagnant.”