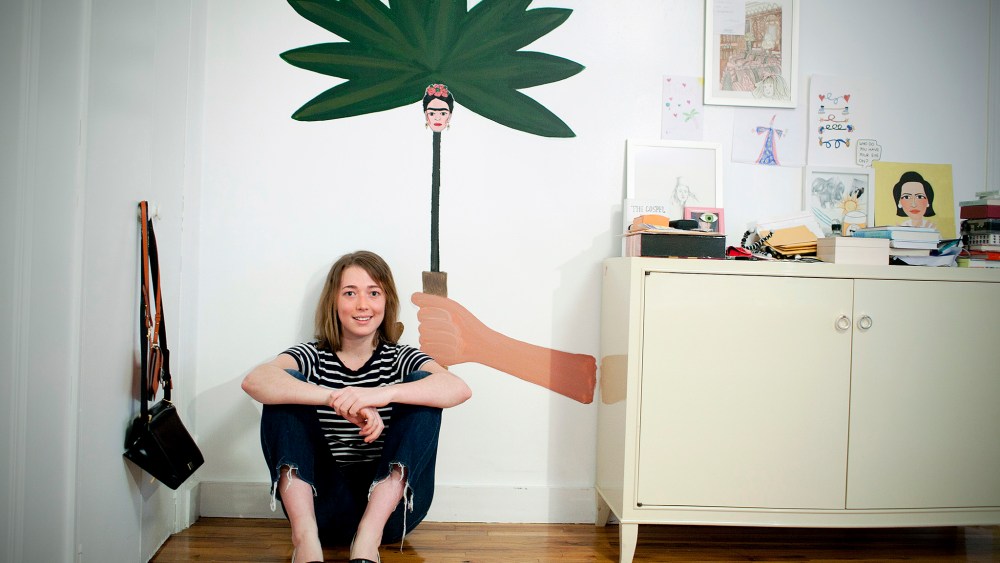 “My Instagram was never, like, photos of my friends at parties,” says Angelica Hicks, from the couch of her South Village apartment. If such a concept sounds like a recipe for social media disaster — aren’t you supposed to post carefree party pics of your friends for guaranteed “likes”? — Hicks has had the opposite experience; her cheeky, punny illustrations of fashion brands, insiders and influencers has turned into a full-fledged career. This April, her drawings jump from Instagram to print, when Laurence King releases a book of her selected drawings, “Tongue in Chic.”

“I like trying to make people laugh,” Hicks says. “I’m not so successful in real life — I’m always a lot funnier online, even chasing that back to MSN [messenger]. People would meet me in real life and be like, ‘Oh.’”

Hicks studied history of art at University College London, which spawned an interest in drawing, sought as a refuge from the heft of slogging through art textbooks her final semester. “Most people are like, ‘Oh, that must’ve really helped!’ and I’m like, ‘No no no, there’s nothing creative in terms of actually drawing when you’re studying history of art,’” she says. “I’m not sure if people just didn’t listen to the history bit, and thought I was just studying art. It was just too many hours in the library.”

Luckily, a passion for creativity was fostered by her parents; her mother is the designer Allegra Hicks, and her father, Ashley Hicks, is an interior designer (and second cousin to Prince Charles). “While most people were active outside with their parents, we’d sit around a table, drawing,” she says of her upbringing.

Upon graduating, she was attempting to obtain a visa to come work in New York for the creative director Doug Lloyd of Lloyd & Co, but ran into a series of logistical snags. “I didn’t get that job and I was freaking out. And then, the person that actually introduced me to Doug Lloyd is my agent,” she says. “He called me to find out what happened; there was a two-minute lull on the phone, and he was like, ‘Oh my God, why am I not just taking you on and representing you? You have enough interest, now all you need is an agent to be able to do this properly.’”

Before long she was commissioned by Porter Magazine to illustrate London Fashion Week, and then by Tory Burch to create invitations. “I’m told that it really gained momentum when Kendall Jenner and Gigi Hadid regrammed my drawing,” she says, after it was announced they would walk the Victoria’s Secret show and she posted them done up as secret service guards, calling it “Victoria’s Secret Service.” “I guess Gigi followed me because of Amy Astley — I’m assuming this is why she followed me — I did a drawing of her, that was ‘Kiss My Astley,’ and she reposted it, and Gigi reposted it, and then Kendall Jenner reposted it as well. And that’s when it really gained momentum.”

Hicks stays glued to runway shows — even sitting front row at some, like Gucci — and will be home illustrating immediately following the collections. “When Alessandro Michele was still new at Gucci, I mean it was insane, the kind of transformation overnight,” she says. “I did a ‘Gucci bids farewell to Hoochie’ [illustration] celebrating Alessandro’s new vision.” She describes this as her newest approach, which is rooted more in “fashion commentary,” an evolution from her original drawings when “the humor was less like pun and obvious wordplay — because I was still thinking that people actually looked at everything.”

The reactions have all been positive. It turns out the fashion industry has a bit of a naughty sense of humor after all. “It’s like poking fun with, as opposed to poking fun at, because I’ve always hated cyberbullying,” Hicks says. “I would never make fun of someone for their looks. And in that way, they’re not caricatures. And when people call them caricatures, I get quite, like, ‘Mmmm, no,’ because caricatures implies exaggerating the negative aspects of someone, which I don’t really do,” she says.

“And, obviously, Donatella Versace’s not a part of Nutella.”