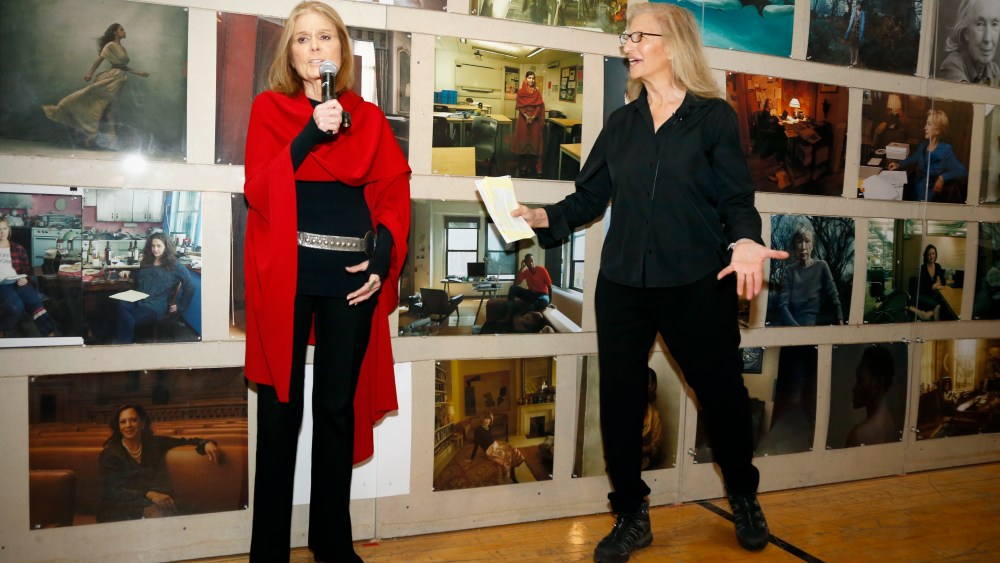 “This is not the way we imagined this week would turn out, but mark my words, this is still a celebration,” Annie Leibovitz said at the press preview for “Women: New Portraits,” a UBS-commissioned continuation of her 1999 project, “Women,” with Susan Sontag. “It’s a somber, sobering, emotional celebration. There is much to talk about. Not only do we have Christmas and Thanksgiving traffic, but now we have Trump Tower traffic. Thrilling!”

“Women: New Portraits” is a traveling pop-up exhibition of portraits taken by Leibovitz of women who have “achieved something.” By the end of the exhibition’s tour, Leibovitz and Gloria Steinem would have traveled to 10 cities worldwide, setting up shop in places that Leibovitz said “would eventually have another life.”

“London, we were in a power station,” she said. “Singapore, an old train station. San Francisco, Crissy Field, a World War II airplane hanger. Mexico City, a grand old house from the 18th century that was sort of collapsing around us.” Here in New York, the pop-up is held in the gymnasium of the former Bayview Correctional Facility, which is being transformed into The Women’s Building. The choice of location, Leibovitz said, was Steinem’s.

“Welcome to a place of freedom that was formerly a place of limits and difficulty and discrimination,” Steinem said from the gymnasium. She gave a special thank you to Governor Andrew Cuomo “because he has closed more prisons than any other governor in the country,” including Bayview Correctional Facility. “There could be nothing more symbolic than this space right now — nothing we need more than this space right now.”

The pop-up is composed of a wall of the new portraits, three screens projecting images from Leibovitz’s original project and a talking circle. Some of the women whose portraits are on display include Serena and Venus Williams, Olympic swimmer Katie Ledecky, politician Aung San Suu Kyi, Sheryl Sandberg, Malala Yousafzai, Misty Copeland, Gloria Steinem and documentary film director and producer Laura Poitras. Leibovitz noted that she had only just added Hillary Clinton in light of recent events.

“Secretary Clinton was not on this wall until this show,” Leibovitz said. “I’m looking forward to doing a portrait of Secretary Clinton. I still want to take a more updated version. I did go on the road and I tried to take campaign pictures and I was pretty bad at it. I was stumbling along.” She added that while editing Clinton’s portrait, one small detail in particular caught her eye: a tile sitting on Clinton’s desk. “It says, ‘Never, never, never give up.’”

During the Q&A portion of the preview, a reporter asked Leibovitz and Steinem if they would give women in the U.S. a message in light of the election. Were either of them concerned? Were either of them worried? Steinem said that she was both, but she also proposed that perhaps the best is yet to come.

“What we call domestic violence, that is violence within families, is the paradigm of all violence except violence in self-defense,” Steinem told the crowd. “What we know is that at the moment of just before escaping or just after escaping is the most dangerous time for a woman — could be a man, too, but usually it’s a woman escaping from a violent household. Then is the time when she is most likely to be beaten or murdered. So I think we are similarly at a time of both maximum danger in this country and we need to look after each other and see the true diversity of human beings — male or female. But it’s also true that just as we would not tell anyone to go back into a violent household, we will not tell each other to go back. Even though it’s a time of danger, maybe we are about to be free.”