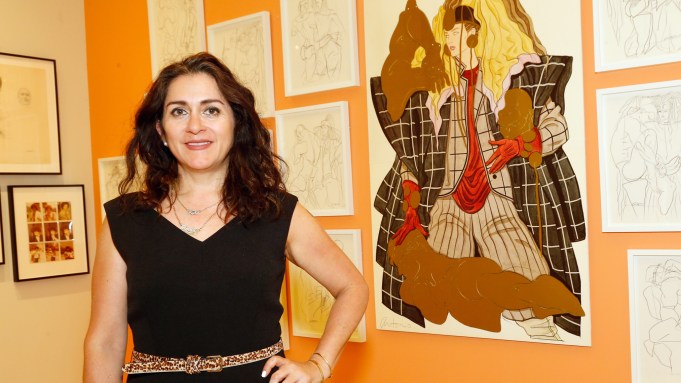 El Museo del Barrio’s latest exhibit calls attention to a fashion illustrator from its own neighborhood.

“Antonio Lopez: Future Funk Fashion,” which opens June 14, has been 15 years in the making. “Curators in the past had gone to the archive but nothing developed until just last year,” explained cocurator Rocio Aranda-Alvarado. The show incorporates work from the Antonio Lopez estate in New Jersey and from private collectors, including designer Narciso Rodriguez. It’s the most comprehensive exhibit of Lopez’ work to date, featuring more than 400 of his illustrations and creative projects.

Lopez was born in Puerto Rico in 1943, but grew up in East Harlem after his family moved to America when he was seven years old. He attended P.S. 107, before moving on to The High School of Art and Design. “He lived in East Harlem pretty much his whole life,” noted Aranda-Alvarado. Lopez passed away in 1987 at the age of 44 from AIDS complications.

While attending FIT, Lopez met Juan Ramos, who would become his lifelong partner and creative collaborator. “It was always really collaborative,” said Aranda-Alvarado. “I don’t think people realize how much Juan was kind of the idea man. He would go and buy the books. He would say ‘OK, we need an idea for a commission that we got for a particular store,’ and they’d go to Rizzoli and buy books.”

The young fashion illustrator was given his first job while still attending the Fashion Institute of Technology — he was hired by John B. Fairchild, then editor in chief of Women’s Wear Daily. In addition to illustrating for many publications — WWD, The New York Times, Interview during Andy Warhol’s reign — Lopez was also frequently commissioned by fashion brands. Many of those projects are on display in the exhibit, including a series of campaign images drawn for  YSL (spelled out by illustrated bodies), Versace and Chloé — the latter images commissioned by Karl Lagerfeld in the early Eighties. Lopez and Ramos were longtime friends of the designer, and were put up by Lagerfeld when they moved to Paris in 1969. “He found a place for them to stay,” explained Aranda-Alvarado. “There were two different addresses in Paris. I think one of them was Karl Lagerfeld’s mother’s building, and their studio space was there.”

Lopez is well known for his drawings of female models, coined “Antonio’s Girls,” and he developed close relationships with many, including Pat Cleveland, Grace Jones, Tina Chow and Carol Labrie. He was particularly interested in representing women of color, who were often marginalized within the fashion world, and aimed to highlight them from an angle of strength.

“He was working on these really powerful figures of women,” said Aranda-Alvarado, gesturing to a wall of black-and-white illustrations. He met many of his muses in context of his daily life. “He met Grace Jones on the subway, and they started talking. It usually began with a conversation, with him asking if she could come pose with him at his studio,” she explained. “He met Jerry Hall out dancing at a club called Club Sept in Paris, and she was wearing a crazy gold lamé outfit that her mom had made for her specifically to go dancing in. He was immediately attracted to her, he asked if he could draw her and she came back to the studio. So that was sort of the way it always developed, and they became really good friends.”

Lopez culled much of his inspiration from music, notably disco, and a wall showcases records from his private collection. A playlist compiled by Bill Corderjo, who was his regular DJ, will play throughout the exhibit. The musical references carry over into Lopez’ work. “The fashion images show hip-hop and urban style influence,” said Aranda-Alvarado, gesturing to a series drawn for Missoni in the Seventies. “You can see the hands are making the popping moves of breakdancing,” she continued. “Who knows if they even knew. You would have to know popping as a style of dance and what it looks like.”

The back room of the exhibit showcases the “future” aspect of Lopez’ work. “By the early Sixties, he and Juan were interested in Science Fiction and they had a series they called Space People,” explained Aranda-Alvarado. “Throughout the Seventies and Eighties they kept returning to this theme of the future world. So there are a lot of women that have these radical hairdos or these contraptions that they’re wearing,” she continued. “They listened to a lot of R&B. That coupled with his interest of people who are marginalized from the fashion industry made him think about this utopian future where science fiction and racial equality sort of mixed.”

“Antonio Lopez: Future Funk Fashion” is on view through Nov. 26.