Antwerp: The Retail Capital of Belgium 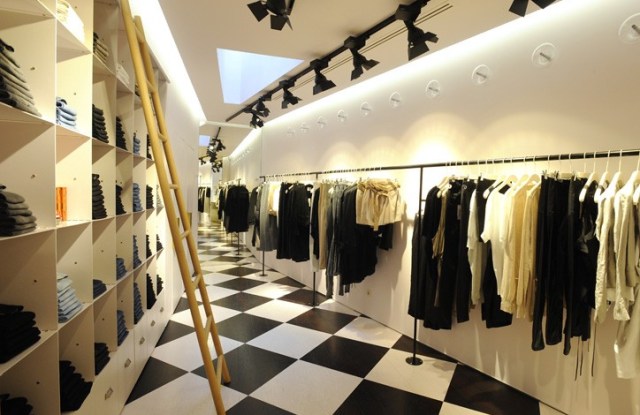 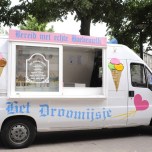 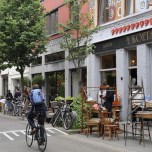 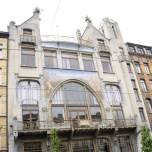 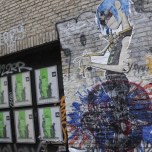 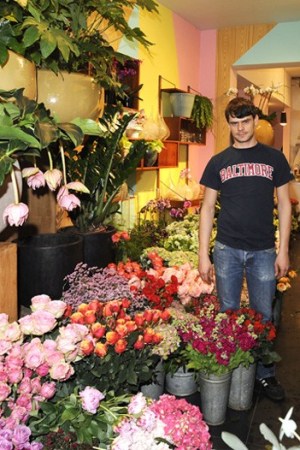 Florist Mark Colle in his store.

ANTWERP—The term “ghost town” might best describe the state of most high streets in Europe since the financial crash, but judging by its vibrant retail scene, Antwerp, Belgium’s unofficial fashion capital, is a golden bubble.

Factors helping keep it airborne include the city’s healthy quota of affluent locals, its status as a major center for the diamond trade worldwide, as well as a rise in the number of Dutch shoppers visiting the city. Considering its modest head count of around half-a-million residents, Antwerp boasts a heady concentration of extraordinary stores, from Dries Van Noten’s 19th-century flagship, Het Modepaleis, at Nationalstraat 16, to Walter Van Beirendonck’s characteristically wacky multibrand store, Walterstore, opened in 1998 at St. Antoniusstraat 12 featuring an industrial garage door that cranks open upon the nearing of footsteps.

Many attribute the phenomenon to the influence of the city’s Antwerp Royal Academy of Fine Arts, which locals say has had a palpable trickle-down effect. The institution schooled avant-garde fashion greats such as Martin Margiela, the so-called Antwerp Six and, more recently, the likes of Bernhard Willhelm and Haider Ackermann.

Over the past few months, a new wave of retail initiatives has only given further impetus for fashion aficionados to flock to the picturesque city. Notably, the paint is still drying on a trio of concept shopping spots — ra13, Graanmarkt 13 and Your.

Another recent addition is Acne’s first Belgian flagship, situated at Lombardenvest 42, which was opened in March by Marjan Eggers, owner of neighboring multibrand emporium, Louis. Coccodrillo, which has operated a luxury women’s footwear store on the tony Schuttershofstraat for more than 25 years, has just opened a men’s shoe store opposite, boasting an elegant Art Deco-inspired interior. Brands stocked include Lanvin, Prada, Bottega Veneta and Church’s.

Retail guru Jeroen Smeekens, meanwhile, plans to open a lingerie multibrand store later this month next door to his other fashion boutique, Hospital. He also owns Clinic, which bills itself as a “denim and stuff supermarket” and, like Hospital, is located on de Burburestraat, a quiet side street in a former industrial neighborhood in the southern part of the city that has become a trendy art and fashion area. The Glorious Inn, a three-room deluxe bed and breakfast, is also due to open over the coming weeks, based above The Glorious restaurant in Hospital’s courtyard. “The idea is that one can eat, drink, shop, have their hair done and, if they like, buy a pair of jeans within an area of 2,000 square feet,” says a spokesman for Hospital, which is based in a former horse stable where the Antwerp Hippodrome used to be.

Wandering through Antwerp’s old-world streets, delightful chance discoveries can also be had. The Antwerp outpost of historic Florentine body care brand Santa Maria Novella, for instance, on Augustijnenstraat, carries a new line of luxury pajama-inspired loungewear pieces designed by store manager Dominique Masullo and produced locally. Run into Mark Colle, who opened his cult flower shop, Baltimore, three years ago, also situated on Augustijnenstraat, and he may be willing to spill the beans on who’s buying which blooms.

So what’s the scoop? Says Colle, who playfully describes his style as “bordering on tacky”: “Dries [Van Noten] is not demanding, but he’s very specific, just have to make sure it looks good. He likes roses and old-fashioned flowers, such as carnations. He’s not into exotic flowers, more nostalgic. Ann Demeulemeester likes peachy colors right now because it fits the collection, but most of the time it’s always white. Raf Simons only buys flowers for himself. He likes the weird stuff, the flowers that don’t look like flowers, like Celosia.”

As for the floral direction for this summer, Colle says, “I’m in the mood for powdery colored flowers that look very fragile. I’m feeling fluffy.” Here, EyeScoop drops in on a handful of the city’s notable hot spots, old and new.

The concept: Royal Academy fashion graduates Romain Brau (French) and Anna Kushnerova (Russian), both 26, found that while Antwerp attracts “crazy people and artists,” its retail scene remained “boring, conservative and safe.” So they dreamed up a remedy. In October, the pair, helped by financial backing from Kushnerova’s family, opened ra13. Based on Kloosterstraat in the city’s antiques hub, the cool yet homely three-story space combines a kitchen, reading area, DJ booth, gallery and 3,300 square feet worth of edgy fashion collections spread over two floors.

As far from the ring-the-doorbell-type establishment as can be found, young creatives mill about the space, which feels more like an artsy cooperative than a shop. With a focus on cool young international fashion labels cherry-picked by the founders on their travels, the store has already proved a vital platform and networking point for local designers, who can often be found lounging in the cafe area as resident pooch, Dakota, an Italian greyhound, pitter-patters about.

Ra13, which is also a platform for installation art, hosts a designer showroom during Paris Fashion Week and sponsors certain young designer collections that are stocked in the store. Current guests include graduates Elise Gettliffe and Lena Lumelsky.

The look: Eclectic, from mismatched antique chairs and crockery in the cafe to crude plywood structures, including a free-for-all bed on stilts for taking naps. Quirky design features include a staff hut capped with a sloping, giant thatched roof that sits at the entrance of the ground-floor fashion area.

Brands: The ground floor focuses on runway collections by newer designers such as Damir Doma, Gareth Pugh, Swash and Hannah Marshall, along with artisanal accessories lines by the likes of Heaven, Arielle de Pinto, J Smith Esquire, Uncommon Matters and Sayaka Yamamoto. The upper level, more playful in mood, stocks kooky toys and collections by generally less-established young designers such as local graduate Daniel Andresen. Brau says he and Kushnerova rely on their instincts for selecting stock. The same goes for the store’s design and merchandising ideas — sunglasses hanging on strings or jewelry placed in wooden cases strewn around the floor.

“We know nothing about it, it’s all very personal and I’m sure it’s full of mistakes,” shrugs Brau, with a grin.
Upcoming projects: June 17 will mark the opening of an exhibition by Swash. June 19 the store will host a party for the end-of-year graduates in its basement. A pop-up expo will be held in the Marais in September.

The concept: Entering the wide-open front door of Graanmarkt 13, a grand white renovated manor house on Antwerp’s tree-lined Graanmarkt market square, feels like stepping into the private home of somebody with impeccable taste, only every object carries a price tag. Owners Ilse Cornelissens and Tim Van Geloven’s living quarters occupy the site’s top floor, while visitors are free to roam around the rest, from the upstairs gallery to the ground-floor fashion and design area and down to the basement restaurant. The gallery can be rented out for private parties or events and stages regular exhibitions and happenings.

On opening during the financial crisis: “It is strange that there are so many new openings, but maybe people think now is the time to get up again,” says Cornelissens. “It’s made them ready for something new.”
Upcoming projects: Italian designer Gentucca Bini from June 11 to 12 will set up an atelier in Graanmarkt 13’s gallery space, where she will rework designer clothes brought in by members of the public.

The concept: Your is the latest brainchild of Dutch retail guru Jorrit Baars, 35, whose past store projects locally include the hip streetwear-focused concept stores Clinic and Fish & Chips. Based in the ground floor of a vast new red brick apartment complex on Kloosterstraat, the main street in Antwerp’s antiques hub, Baars’ latest initiative, a “concept warehouse,” houses a range of mid- to high-end designer, beauty and denim brands, as well as the odd big-bucks collector car. A limited edition Alfa Romeo MiTo that was parked in the store for its opening in March, for instance, was snapped up for a cool 300,000 euros, or about $370,000.

The philosophy: “I wanted to do more, to open a space that included a beauty bar, a hairdresser, a tailoring department….I also want the place to feel easy to walk into, it’s open to everyone,” says Baars, who plans to add on such services in the near future, along with a kids’ department and a Champagne and coffee bar.
Brands: Givenchy, Christian Dior, Vivienne Westwood Anglomania, Marc by Marc Jacobs, Adidas Limited Editions, Raf by Raf Simons, Lacoste,  GoldSign, Diesel and The Swedish Model.

The look: Baars’ brief to the store’s architects, London-based IYA Studio, was for “honest” architecture that allows the product to shine. Keeping the site’s raw shell, all furniture is modular, with products grouped in areas to resemble temporary pop-up spaces.

Crude plywood structures, industrial storage containers and scaffolding serve as merchandising props, while other features include concrete seating blocks with bound stacks of cushions and a flock of white metal swallows whooshing up the wall behind the high-tech glossy cashier counter at the store’s center.

Projects: Baars plans to stage four events a year, each time involving collaborations with five brands across categories that don’t “bite each other.”

The concept: Candles made from recycled church candle stumps, lamps made from old plastic kitchen items and colorful suitcases that in a past life were gasoline cans are among the planet-friendly design goodies offered by Rewind. Opened in November, Stijn Gilles and Liesbeth Wouters are behind Rewind, in partnership with Jan de Haas, who owns the recycled design store in Holland called Studio Hergebruik. There’s an exchange of products between the two stores.

The look: The store occupies a 6,000-square-foot, loftlike industrial space on Riemstraat, at the bottom end of the city’s antiques district. “The area has been up-and-coming for a while, now it’s booming,” says Gilles.
Brands: COOP Furniture Collective, Leslie Oschmann, Freitag and Jacqueline Le Bleu.

With its vintage school chairs, worn floorboards and exposed red brick walls, Le John, one of the hippest additions to Antwerp’s culinary scene, is housed in a street-front section of a school built during the Art Deco period. A narrow wooden staircase leads up to a cocktail bar and lounge area decorated with vintage bamboo chairs and furniture, while a rectangular glass kitchen to the side of the dining area adds a touch of modernity. Behind the window, house chef Lorin Vivier, who coowns the new spot with Charlotte Coppens and Staf Feyf, can be seen cooking up European dishes such as deer filet, chanterelle mushroom and Szechuan pepper, artichoke soup or quail with black truffle, almond and pear.