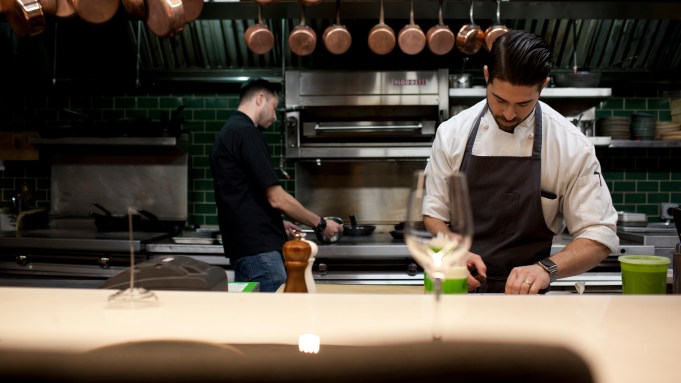 For chefs Adam Bordonaro and Ryan Lory, the path to opening their first solo restaurant, Ardyn, has been quite the journey.

“We lost a lot of spaces, bad leases, shady landlords,” says Lory, standing in front of a wall in the lounge graffiti-ed with neon green foliage.

Bordonaro nods. “It was a disaster. Every disaster you can think of, we’ve hit. It was awful.”

Their luck has since turned around, landing an intimate space in the heart of Greenwich Village, on West 8th Street. The chef pair met in 2014 while both were working for different restaurants under the Charlie Palmer restaurant group. “I was like, ’This is someone who I would love to partner up with eventually in the future,’” says Lory of meeting his eventual business partner. A few years later, the timing was right.

Previously the home of a casual burger joint, the place has been transformed to reflect the intimacy of a sacred forest. The space is outfitted with green jewel tones and natural woods; earthware was custom-created for the concept by chef-turned-ceramicist Kevin Keedy of Under Lock and Key. The dining room in the back is separate from a bar and lounge in the front, creating a sense of seclusion.

“When the lights are dim in the dining room and all of the candles are lit, it really has this kind of feeling like, ‘Wow, I’m in a forest,’” says Lory.

“We wanted something natural,” Bordonaro adds of the thematic concept. “There’s a life cycle and process to it that we see in our own industry, too. We kind of think it parallels with all of the sourcing we’re doing, and everything relies on something else, there’s life and death and it’s cyclical.”

That approach is reflected in the menu, which was crafted around the idea of seasonality. Everything is made in-house, and created in response to a few considerations: “Is it seasonal? Can we get it locally? Are the flavors right? And are you proud of it?” says Lory. “When I was creating the menus, it was like, if I’m sitting at a table, what would I order? And am I getting a good range? If I was with someone else I would say, ‘I would like to do the scallop crudo, I would like to have the burrata and then I would like to have the goat cheese agnolotti and the broccolini.’ And then I’d finish with the wagyu short rib and the striped bass.”

The entire chef team at Ardyn bring with them experience working at Michelin-starred restaurants, a complement to the new place’s innovative and elegant offerings. The menu is split between cold and hot, small and large plates, with the intention that guests will share. A soon-to-open chef’s counter will offer a separate tasting-menu experience. The restaurant’s cocktail program takes an approach similar to the food, with a crossover in ingredients. One dish’s pickled strawberry is another cocktail’s garnish.

Above all, the pair emphasizes an environment of creativity, driven by a passion for innovation using seasonal ingredients.

“I think this is a great proving ground for us to really showcase our skill set and put it on display for people in an environment that we control versus a giant Midtown restaurant where we’re doing three seatings a night and lunch and brunch,” says Bordonaro. “This gives us a chance to be artists. We’re in the West Village, we’re around great culture, and it still has a soul here.”