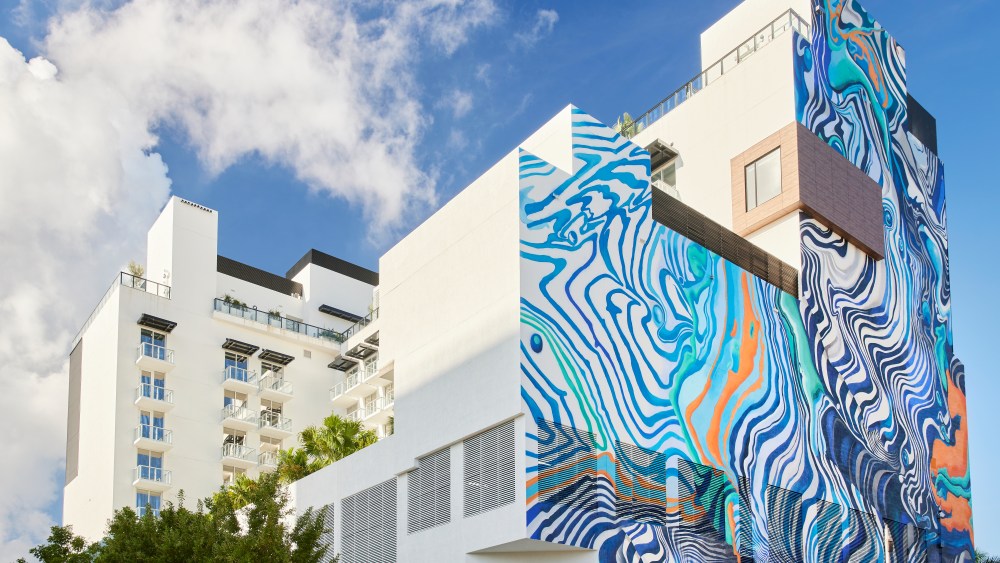 Business is booming in Miami’s Wynwood neighborhood, and Arlo Hotels has moved into the heart of the action.

The Arlo Wynwood recently opened its doors, becoming the first full-service hotel located within the creative Miami neighborhood. Known for street art and graffiti, the Design District-adjacent neighborhood continues to see new development in recent years. The area is quickly becoming a tech hub for start-ups and has drawn companies like Spotify, which opened an office in the neighborhood last year, and Microsoft, which will open its regional headquarters in nearby Brickell.

“Wynwood is already one of the most vibrant districts in all of Miami,” says Arlo chief commercial officer Jimmy Suh. “The city has 1 million square feet of office and residential spaces in development; in addition, the [number of] annual visitors to the district has been exponentially growing. From an accommodation and lodging perspective, it made sense. And from a cultural perspective, this is also the ethos of Arlo: we want to be in districts where it’s all about discovery, exploring and new adventures.”

The hotel, over five years in the making, is Arlo’s second location in Miami, following the Nautilus by Arlo across Biscayne Bay on Miami Beach. Guests at the Arlo Wynwood won’t have the beachfront of its sister property, but they will be a short walk from the famed outdoor mural museum Wynwood Walls.

While the neighborhood continues to flourish, the hotel is focused on paying homage to its creative surroundings. The property features more than 250 pieces of art, and there are plans to introduce rotating exhibitions. The building’s exterior murals were painted by Hoxxoh and Milagros Collective.

“The history of Wynwood was all about graffiti art and murals so we wanted to embrace that as part of our design,” says Suh. “Being a [hospitality] pioneer in the district, we took it upon ourselves to have an extra responsibility to make commerce and culture coexist and live harmoniously.”

The city has become a de facto home for crypto, and the Arlo Wynwood has two featured artists lined up in time for Miami Art Basel who span the physical and digital spaces. Brooke Einbender will show several of her painted door works with an augmented reality component and prominent NFT digital artist and painter ThankYouX will have a new piece on view.

The hotel’s interior design was led by New York-based firm Meyer Davis. Guest rooms — there are 217 — feature white oak furniture, coral and aqua-colored accents, and many rooms feature balconies with views of the neighborhood. Amenities include a rooftop pool and yoga deck, which features a plexiglass mural by local artist Ari Robinson. Acclaimed Miami chef Brad Kilgore is heading up the hotel’s flagship restaurant MaryGold’s, a “Florida-inspired brasserie,” and cocktail collective Bar Lab oversees the hotel’s three other bars and a café.

“The setting, the room design, the rooftop pool which gives an incredible panoramic view of Miami city, and of course Wynwood — all of that has been incredibly well received,” adds Suh.