Armani's first hotel in the world occupies eight floors of the soaring Burj Khalifa in Dubai. 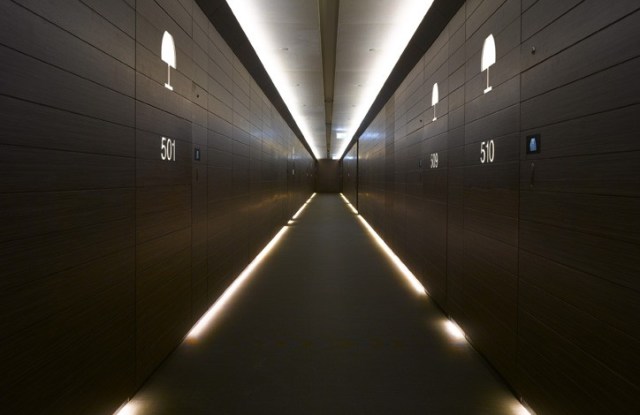 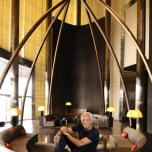 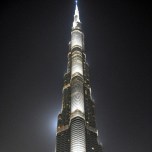 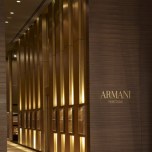 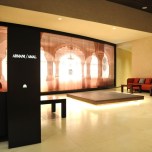 DUBAI — “The idea is that you should feel as if you are coming to my home,” said Giorgio Armani.

This story first appeared in the April 28, 2010 issue of WWD. Subscribe Today.

What a home. Armani was talking about his first hotel in the world, which occupies eight floors of the soaring Burj Khalifa here, a dramatic tower into the sky that is the world’s tallest building. The 160-room hotel, for which almost no expense has been spared, boasts eight restaurants, a spa and three retail outlets.

Speaking exclusively to WWD at the opening, Armani said, “Yesterday when I arrived and saw the hotel, I felt really emotional. After five years of working on this project on paper and sketches, I finally saw how it all came to life.”

The project, a joint venture between Giorgio Armani SpA and Emaar Properties, is the first in a planned collection of hotels, resorts and residences to be unveiled in key cities around the world by the partnership.

Yet the opening comes in the wake of a cloud of negative publicity surrounding Dubai’s recent debt problems and the economic downturn that hit the emirate, which relies heavily on tourism and retail. Despite these problems and the global recession, both the designer and developer remain optimistic.

“The economic problems are not unique to Dubai. It affected the entire world,” said Mohammed Alabbar, chairman of Emaar. “And like the rest of the world, we are coming out of it. We definitely see the addition of the Armani brand in our hospitality group as a major financial boost to our company.”

Armani added that he always knew this project was too important to fail.

And, in typical Armani fashion, he obsessed over every detail — from the bed linens and bespoke furniture down to the selection of Armani Privé toiletries in the bathroom. The rooms, in Armani’s austere style, have no paintings or photographs on the walls and no major intrusions of color.

The designer, who dedicated several hours a week for the last five years to the hotel project, carefully chose to focus on luxe materials rather than decorative elements. The walls of the hotel are covered in Marmorino silk and Florentine leather and the floors are Eramosa stone. There are elements of the hotel that reflect its home in the Middle East; for example, the main entrance to the hotel features dramatic metal arches inspired by traditional Arabic architecture.

Armani said his biggest design inspiration was the iconic building itself. “What was very interesting and inspiring to me was the form of the building, which is inspired by the shape of the desert rose.”

He followed the curves of the building’s existing architectural shell in the rooms’ interior design. There are no straight walls in the outer suites. The result, he said, is a hotel that instead of having any one big open space, is full of small intimate ones. “This is a place where you have to find your way. It’s an adventure,” he said.

Armani said the hotel is the realization of a dream to open his entire lifestyle philosophy for the world to experience. Even the hotel’s service is based on Italian-style hospitality. There is no traditional reception area. Each guest is assigned a lifestyle manager who serves as a host from the moment they make a reservation to the time they check out, sometimes even personally meeting guests at the airport. The lifestyle manager is there to understand their interests and desires and customize the stay to the guests’ needs.

Armani and Emaar have also invested significantly in developing an extensive high-end food and beverage offering. The eight restaurants — which range from Japanese to Indian and fine-dining Italian — reflect the city’s cosmopolitan nature. There is also an Armani Privé nightclub.

In addition to the hotel, Armani has designed seven floors of Armani Residences, also in the Burj Khalifa. Like the hotel, the residences are fully furnished by Armani.

The designer said he had been approached several times to venture into hospitality, but he needed the right partner. When Emaar first asked him to open in Dubai, he said initially he was skeptical.

“I was very surprised because what I knew of Dubai was that it was like Vegas in the desert,” said Armani. “And my first question was very direct: Are you really sure you want me? Because my style is very minimalistic.”

When he saw the project plans, he said, it was something he could not say no to.

Alabbar said there was no question that Armani was the right person to design the only hotel to be housed in the tallest building in the world. They did, however, have to develop a friendship over the course of two years. “I went to his homes, his fashion shows and on his boat because he really wanted me to understand how to live with Armani, what the lifestyle was. So this has really been a relationship built on understanding,” Alabbar said.

He added the result of the partnership is beyond expectations. “Building is happening every day, everywhere in the world. But it’s not always easy to create spaces with spirit. And that is what Mr. Armani has done,” he said.

The opening was celebrated with a party Tuesday night for 600 guests that included a runway show of Armani’s spring Privé collection, followed by cocktails and dinner. Armani mingled with guests and laughed with friends old and new, some of whom flew in from Italy with him on his private jet. Devoid of the usual pomp and circumstance and celebrity sightings associated with big openings in the region, the spotlight of the day’s festivities was squarely on the hotel itself.

Armani, who turned 75 this year, repeated that he has no plans to retire. He welcomes the challenge of creating hotel spaces, which bring together so many aspects of his design life.