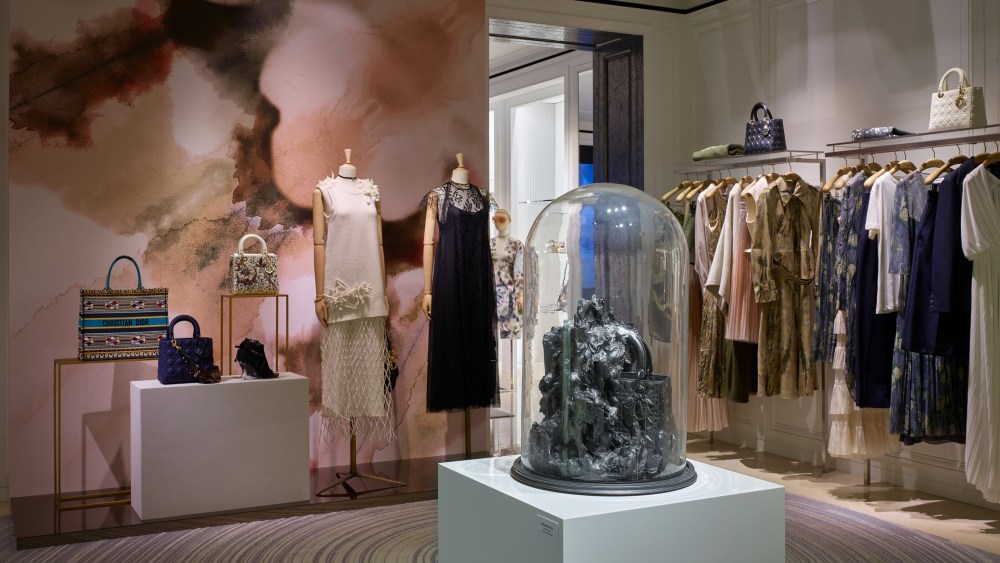 HONG KONG — Now in its seventh year, Art Basel Hong Kong is growing up, but it isn’t slowing down. The past week attracted an ever-growing flurry of parties and other events to the city in its wake, vying for the attention of well-heeled collectors from around the world.

Fashion brands again this year had a notable presence during the art fair, with Dior, Fendi, Swarovski, Balmain and Prada all embracing the art world in various ways.

Taking over the elegant Madame Fu restaurant in the Tai Kwun art center, this second iteration of the roving Prada Mode club — the first was during Art Basel Miami in December 2018 — featured an installation of photographer Jamie Diamond’s unsettling “Dolls’ House” series, documenting the intimate interactions of humans with inanimate baby dolls.

“It’s all about exploring the social complexities and cultural conventions that define motherhood, and the mother-child paradigm,” Diamond said. The artist, who gave a talk and was honored at a dinner, told WWD that partnering with Prada for the exhibit, curated by Germano Celant and Melissa Harris, was an incredible experience. “It’s been wonderful, very humbling, actually.”

Brooklyn-based Diamond, who heads the undergraduate photography department at the University of Pennsylvania, brought three of her students along and also invited former students working in Asia. “There’s a nice Penn community right now in Hong Kong,” she said.

Also for Art Basel Hong Kong, Prada tapped three female architects — Cini Boeri, Elizabeth Diller and Kazuyo Sejima — to create products of nylon, one of the brand’s signature material. Part of the “Prada Invites” collaboration, the pieces — articles of clothing and accessories for women — were on display at the venue and simultaneously offered for sale at the label’s Alexandra House flagship.

Meanwhile, Dior had selected Chinese contemporary artist Li Shurui to create a work for its “Lady Dior As Seen By” exhibit on-site at the Art Basel show. Li works with light, movement and radiance, and her piece, depicting a conversation between two people via a social media app, is the first in the brand’s series to use a video format.

Li said she felt lucky to work with Dior on the project, although it was a bit nerve-wracking as the deadline was tight. But that didn’t deter her from completing the labor-intensive project — she hand-painted and photographed each panel to create a pixelated look, and then digitized it.

The maison also displayed nine sculptures from its “Lady Dior As Seen By” series at its Landmark boutique.

Nearby at the same shopping center, Fendi celebrated the 10th anniversary of its signature Peekaboo bag with an exhibit of customized interpretations by designers and tastemakers from around the world.

The centerpiece was “The Shapes of Water,” an installation by Dutch designer Sabine Marcelis comprising 10 fountains. In its Landmark boutique, Balmain paired three pieces from the collection of London-based Tornabuoni Art with a complimentary creation by creative director Olivier Rousteing.

Curator Ermanno Rivetti hosted a talk about the collaboration. Well-known fashion retailer Joyce held a cocktail to present “The Paint We Wear,” a collection of colorful rugs on which Belgian interior architect Gert Voorjans and textile artist Christoph Hefti collaborated.

Swarovski was a partner at Art Central, a satellite art fair concurrent with Art Basel, and this year worked with designer and architect Steve Leung on his installation, “Shades in Ascent,” at the main entrance.

Inspired by traditional Chinese lanterns, the immersive piece utilized 52,800 Swarovski crystal beads illuminated with lighting that changed in accordance with a musical soundtrack. “We are actually promoting positive energy,” Leung explained. “Stay in my booth, whether for 10 seconds or two minutes, you will find yourself submerged in an environment that is outside of the real world. I want people to feel relaxed there.”

In just two years, LACMA’s party has become the hot ticket of Art Basel, although this year it fell victim to its success. With tickets highly sought after and the venue, the former textile factory The Mills, slightly smaller than in years past, attendees waited for up to one hour to get in.

Despite the jam, the event was a success, with partygoers jumping onstage to dance during a concert by Antibalas. Beijing contemporary art center UCCA cohosted the event along with LACMA this year, hence the “Grand Nomad” theme. “The idea of bridging the Pacific…of celebrating a central element of exploration was an important one,” said Princess Alia-Al Senussi, who masterminded the annual event along with Dino Sadhwani.

LACMA director Michael Govan called the party a celebration of the ever-growing art scene in Asia. “Collaborations between LACMA and Yuz Museum [in Shanghai] as well as UCCA’s revitalization are examples of how Beijing and Shanghai have become robust centers of contemporary art. LACMA was thrilled to be welcomed to China and Hong Kong,” he said.