Not unlike the celebrity-stoked Art Basel Miami, the event kicked off with a flurry of exhibition openings, private dinners and late-night parties. 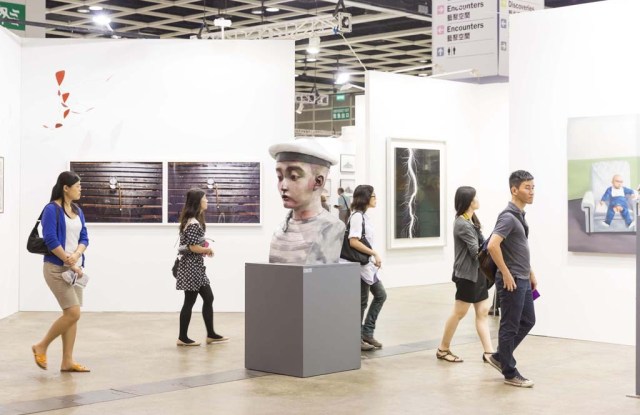 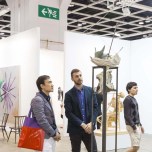 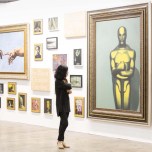 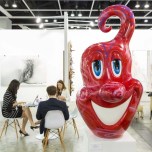 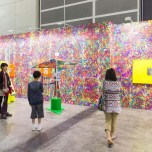 “The fact that you put the Art Basel label on it really does bring people out to Hong Kong in a way that it hadn’t before,” explained Ashley Rawlings, Tokyo director at Blum & Poe gallery.

The Hong Kong Observatory reported more than 18,000 lightning strikes, and a violent storm shut schools and even halted stock market trading at one point on Wednesday but the fair’s opening festivities continued undeterred. Not unlike the celebrity-stoked Art Basel Miami, the event began with a flurry of exhibition openings, private dinners and late-night parties attracting the likes of Diesel’s Renzo Rosso and Russian oligarch Roman Abramovich.

Festivities kicked off at the historic Pedder Building, where six galleries held simultaneous previews on the eve of the fair. The building was so packed that many collectors were forced to wait in line for 30 minutes on the sidewalk before entering. Those who made it inside hopped between galleries with Champagne flutes in hand. Many headed straight to Gagosian Gallery to catch a glimpse of paintings by Jean-Michel Basquiat.

Nearby in the Robert Stern-designed building at 50 Connaught Road, White Cube held an opening for Jake and Dinos Chapman whose morbid diorama “The Sum of All Evil” filled the entire first floor of the gallery.

Clad in a futuristic silver jacket, Rosso stood out in the crowd. “I love art so much. I came in for the fair, of course, and we are looking for how to develop the market here,” he said.

On Thursday, VIPs combed through packed aisles at the fair, looking at work ranging from paintings by blue chip Western artists like Gerhard Richter to sculptures by the big-ticket Indian artist Subodh Gupta. Some complained of being too distracted. “I’ve only seen a fraction of the fair because I cannot work through it with all the people,” said Swiss collector Uli Sigg.

In the heart of Central, an intimate gathering for Colombian artist Fernando Botero took place at Kee Club on Wednesday night, attended by Princess Michael of Kent. Over at the Grand Hyatt, close to 2,000 people filtered into the after party held by founder of K11 Art Foundation Adrian Cheng and Modern Media’s Thomas Shao.

That same night, the fashion crowd flocked to Audemars Piguet’s party at the city’s hottest new address, Duddell’s, an art-inspired restaurant and members’ club perched above the Shanghai Tang flagship. “There is such a diverse mix of people from all over the world. I’m just overwhelmed,” said collector and co-founder of Duddell’s Alan Lo, gesturing at the crowd spilling out onto the terrace.

On Thursday, Christian Louboutin hosted an exhibition of Chinese artists Ye Hongxing and Qin Weihong. Down the street at Shanghai Tang, Chinese artists Cai Yuan and Jian Jun Xi staged a Marina Abramovic-styled performance, obstructing a white doorway staring down guests as they squeezed past into the cocktail party in the store. The party beat on with collector Richard Chang and fashion entrepreneur Dee Poon hosting an exclusive soiree at the nightclub Fly where guests let loose to Nineties music.

“It’s been a whirlwind week,” said Courtney Plummer, partner of Lehmann Maupin gallery catching her breath on Sunday as the fair came to a close. “Everyone who I’ve spoken with, not just dealers but young collectors and colleagues, really feel a heat here, and I’m not just talking about the humidity.”