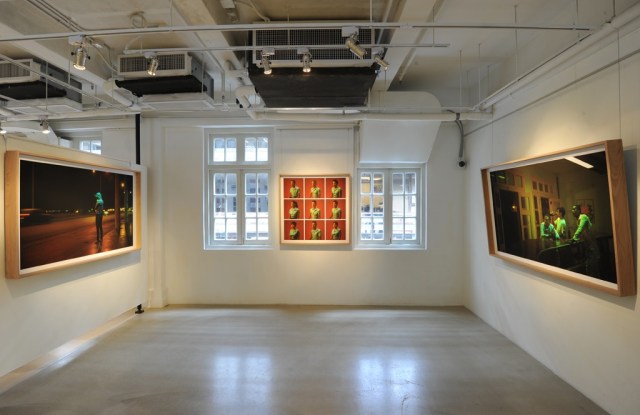 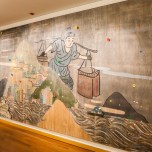 HONG KONG — Art collectors and enthusiasts from all over Asia converged here last week for the second edition of Art Basel Hong Kong.

The fair, which also holds events in Miami and Basel, Switzerland, opened its doors last Thursday at the Hong Kong Convention and Exhibition Centre, featuring 245 galleries from 39 countries and territories, mainly from Asia.

The show attracted more than 65,000 visitors from throughout Asia, a bump up from last year’s 60,000.
Throughout the city, galleries, restaurants and cultural hubs took part in arts-inspired festivities by hosting opening receptions, arts-themed menus and parties.

Christian Louboutin, in collaboration with Art Lexïng, a platform promoting works from emerging Asian artists, hosted the opening for Chinese photographer Quentin Shih’s solo exhibition titled “La Habana in Waiting” at the Anita Chan Lai-ling Gallery next to the Fringe Club on Wyndham Street. Partygoers sipped mojitos while trying to chat above the DJ’s booming beats while Shih’s photos, showcasing the sadness of individual Cubans living under communism, hung in the background.

“[Louboutin] is a very, very big lover of Cuba, he’s gone numerous times. He was just very taken by [Shih’s] art and very struck by the portraits,” Louboutin’s senior vice president of global communications, Anne Muhlethaler, said at the opening.

“We were excited to hear about Art Basel last year, and through some connections just fell upon some artists that we really loved. It’s because of the artists that we’re taking part,” she added.

Muhlethaler said Louboutin himself selects everything for the brand’s global events and was captivated by Shih’s photos after Lexïng Zhang, Art Lexïng’s director, introduced his works via Muhlethaler in Miami, where Zhang is based.

On the top floor of the Louis Vuitton flagship on Canton Road, celebrated Hong Kong artist Lam Tung-pang showcased a solo exhibition called “Play” at the store’s Espace. Lam used toys, some taken from his daughter, ranging from small figurines to stickers, and placed them on his paintings done on plywood using acrylic paint. The idea was to show how humans are slaves to the city or are all toys to the city. In one three-dimensional diorama made from wood, Lam created an urban landscape similar to Hong Kong with mountains and skyscrapers and placed little plastic figurines of people holding on for dear life to the buildings’ ledges.

Galleries said this year’s fair attracted a diversity of patrons.

“Last year we saw more collectors. This year, we have everyone from children and students to collectors, so just everyone is out here,” Renna Okubo from Blum & Poe said.

Ho-Sook Lee, an art buyer from Seoul, said she’s on the hunt for emerging Chinese artists for her clients.
“China is an important market, and my clients are looking for interesting new artists,” said Lee.

The fair has attracted collectors from all over Asia, namely Australia, China, Korea, Philippines, Singapore and Taiwan.

In recent years, art collection has been trending among China’s wealthy, especially among the young generation, mainly due to the country’s economic rise and people’s desire in acquiring taste. However, Chinese collectors are known to support homegrown artists.

“Most people start buying [from] artists [they know] before they move on to what they don’t understand,” said Theresa Liang from Beijing’s Long March Space based in Beijing’s 798 art district.

“Especially now, with Chinese contemporary art, [it] has moved from being very local to having concerns that are very Chinese to [being] a lot more global,” Liang said, explaining that this shift “is a very natural cycle” due to China opening up.

Next year, Art Basel Hong Kong will be bumped up to March instead of May to be more accessible for galleries and visitors.