Art Basel Miami Beach 2019: Where to Eat and Sleep

From cakesicles to natural wine, the best new openings in hospitality for Art Basel Miami Beach 2019.

What’s new in the food and hospitality scene in Miami for 2019 Art Basel? Below, our guide for where to eat and stay for this year.

Given the balmy climate, Miami isn’t exactly a baker’s paradise — but ice cream is another story. Frohzen, among a trio of new dining concepts by the late Jöel Robuchon’s successors and protégés, promises to do for icy confections what the Cronut did for doughnuts. Besides being delicious, its focused menu is meant for Instagram (what isn’t these days?) and explores dessert’s white space.

“I don’t think anyone has made a cupcake almost entirely out of ice cream,” says executive pastry chef Salvatore Martone, of his exclusive recipe that churns sponge cake and ice cream into a frozen cupcake topped with soft serve, in lieu of frosting. “Flavors are inspired by traditional combinations like red velvet cake with cream cheese frosting.”

Macarons elevate ice cream sandwiches of childhood memory, and hybrid popsicles called cakesicles are piped with semifreddo. Though not a fan of the rainbow unicorn drink fad, Martone gets its appeal. His treats come with custom blends of gourmet crumbles such as cinnamon and key lime. Martone, who will take Ben & Jerry’s over Häagen-Dazs any day, says “I always go for textured ice creams. I love finding that little swirl of caramel or crunchy nut.” 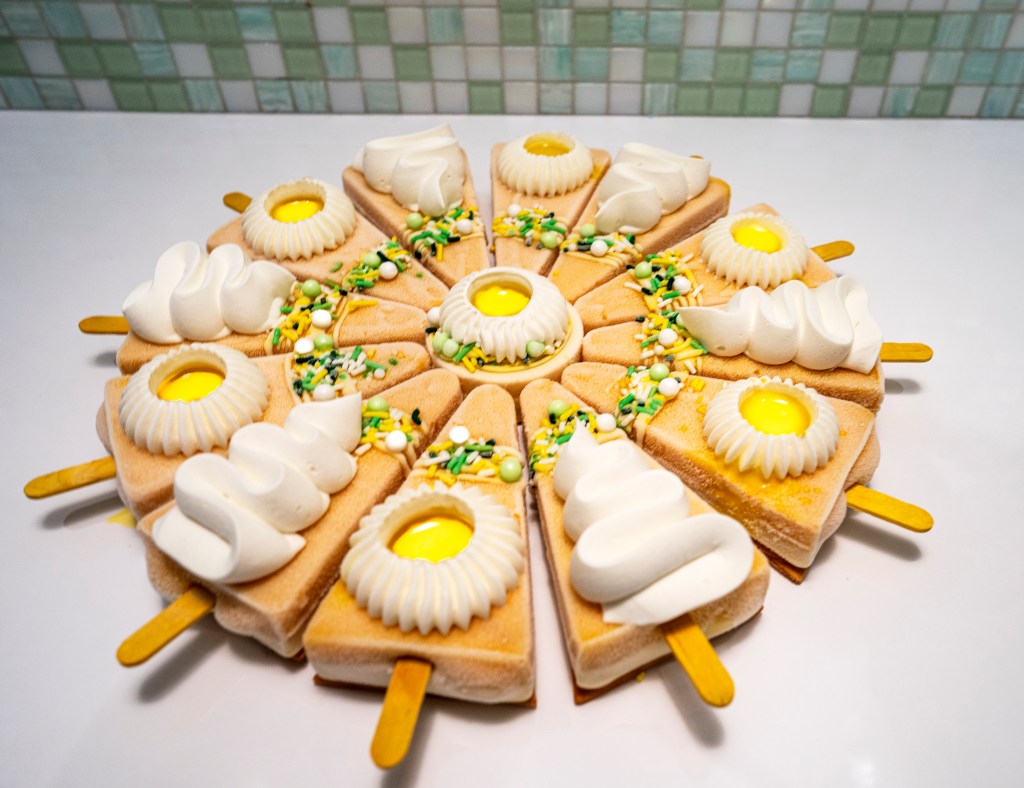 Cannibalism isn’t exactly polite dinner conversation — unless it’s in the name of art, and you’re Alan Faena. The provocative visionary has partnered with Unigram Theatrical, a young British company founded by music and theater veterans Amanda Ghost and James Orange, for a dinner theater production based on Peter Greenaway’s chillingly disturbing cult classic “The Cook, the Thief, His Wife & Her Lover.” Like the film’s denouement, cannibalism is indeed on the menu (at least for the thief), but so is Miami chef Michelle Bernstein’s duck and chocolate sphere dessert served with individual mallets to violently crack for a bit of audience participation. The immersive, meta experience re-creates the movie’s otherworldly set, a gourmet restaurant called Le Hollandais, where the lines of reality and the stage are blurred.

“You’re actually dining with the actors,” Faena says of his first immersive concept that involves a functioning restaurant as if “Sleep No More” meets fine dining. “The timing is very difficult to synchronize serving courses between acting scenes and music numbers.”

In the age of Trump and #MeToo, through the show’s subject matter and support of the Florida Coalition Against Domestic Violence, it’s timing nails the zeitgeist. Yet it’s been brewing in Faena’s thoughts since Greenaway spoke at the original Faena in Argentina more than a decade ago.

“It was a very revolutionary movie 30 years ago, and I thought it would make a great musical someday,” says Faena, who has grander plans when it closes here in May. “We’ll take it on the road to other cities.” 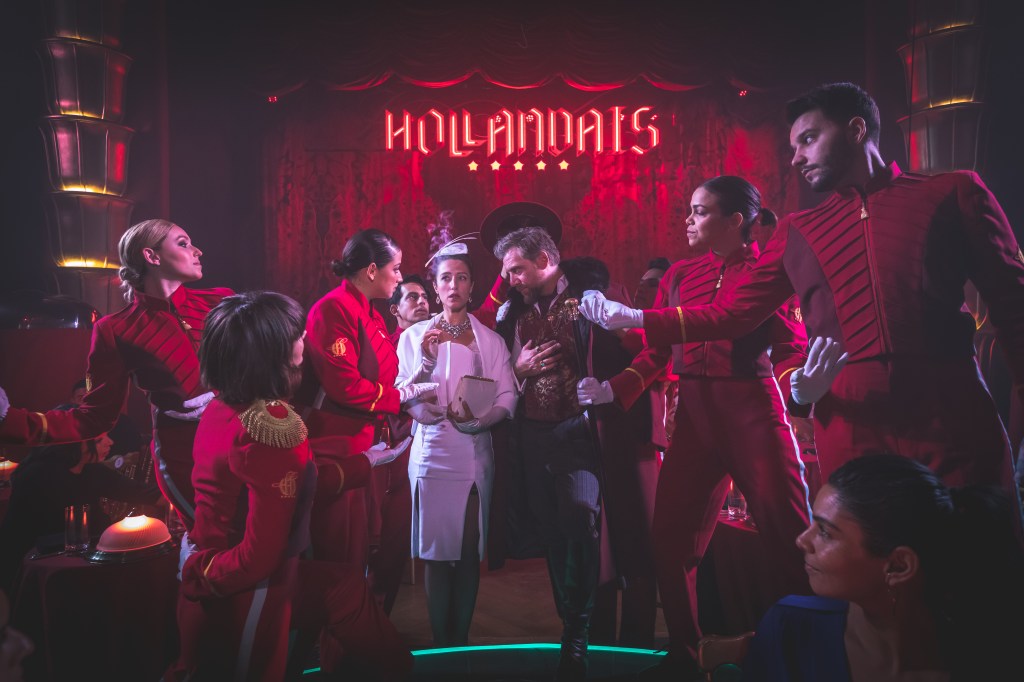 “The Cook, the Thief, His Wife & Her Lover”  Jeff Evrard

That East Coast-West Coast rivalry is put to rest by Palisociety, whose Palihouse Miami Beach imports the hospitality brand’s California vibes a couple blocks from the Atlantic Ocean. The 71-room boutique property with the frisson and community spirit of Soho House (sans the heart-palpitating bill) adds to Mid Beach’s thriving collection of hip hotels and hostels.

“Most of our L.A. hotel clients are from New York and London, and New Yorkers go to Miami a lot,” says founder Avi Brosh, regarding his foray east of the Mississippi River. “But the hotel’s story isn’t too Miami. It has more of a coastal Italian feel.”

To celebrate his bicoastal status, he commissioned Los Angeles designer Heidi Merrick for exclusive “SRF MIA” sweatshirts in hot pink and black. Real surfers or not, guests can ride the house Moke to the shore, where beach butlers set up beach umbrellas, chaises and picnic lunches. Rather than a full-service restaurant, snacks from grilled cheeses to smoothies can be ordered in the lobby and poolside and residential-style studios, the majority room category, feature kitchenettes. 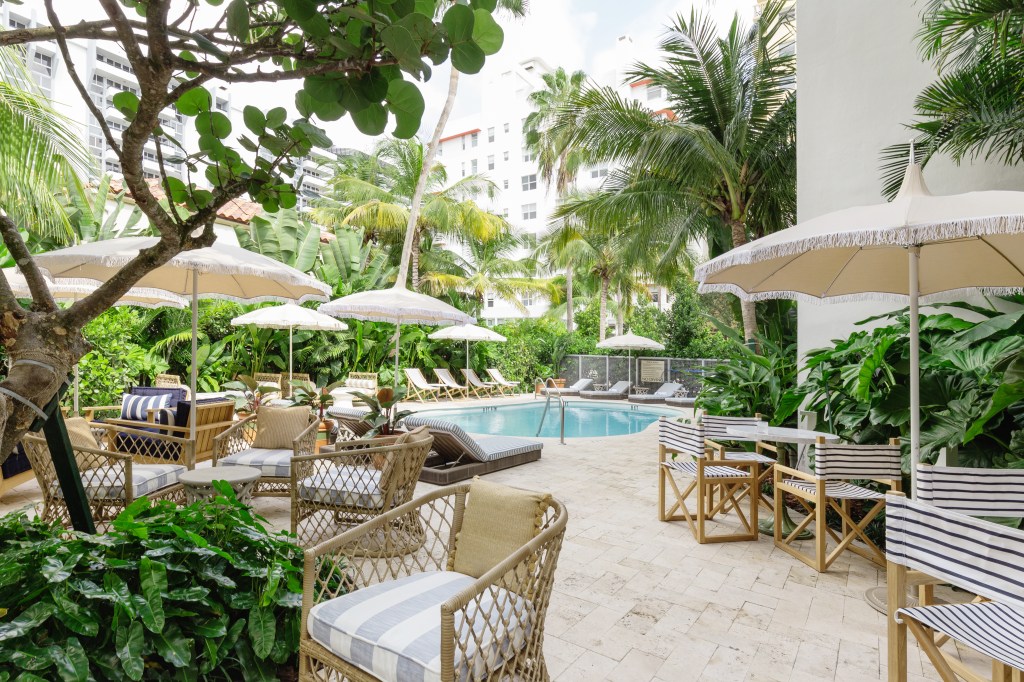 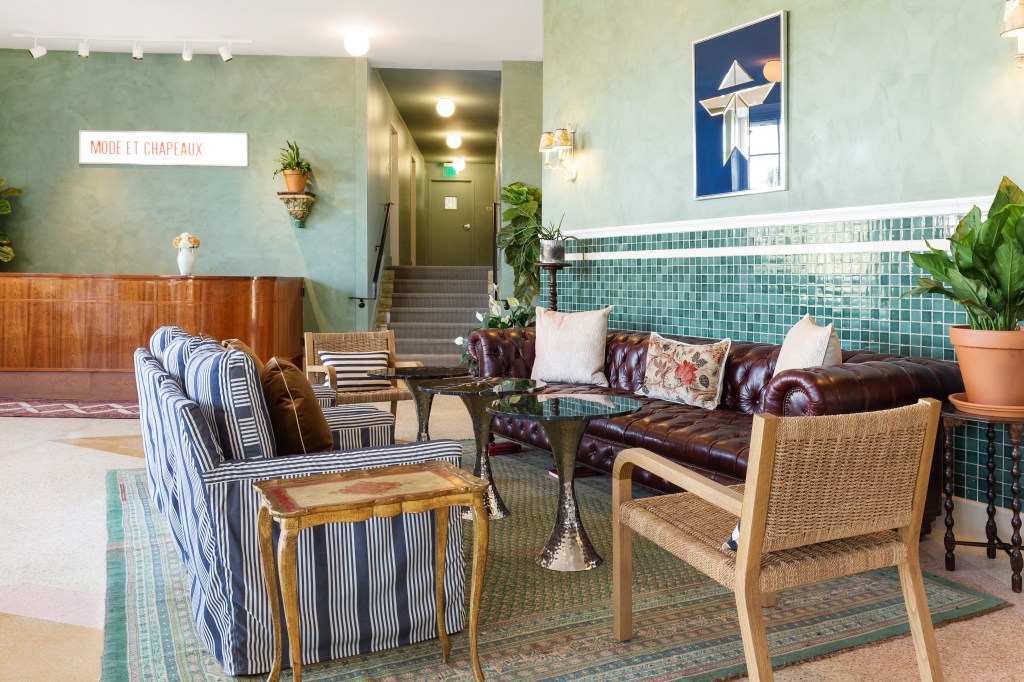 The beautiful Mandolin Aegean Bistro may be the fashion world’s favorite dining destination here, but its husband-and-wife restaurateurs’ roots lie in humbler sustenance. They return to their immigrant ancestors’ livelihood with Gregory’s diner, which is as much a salute to the waning American dream as a sorely lacking all-day neighborhood catchall to recharge. It helps that diners are making a comeback with veg-forward and gluten-free options, according to cofounder Anastasia Koutsioukis, whose Greek grandparents owned and operated a diner for decades in St. Louis.

“It’s not a concept but our story and their story as well as a relatable story to many Americans,” she says, having named their new venture in the mid-century-modern Vagabond Hotel in Miami’s Upper East Side after her grandfather. “We laugh that we’re following in their footsteps but in our own way.”

Mandolin patrons will recognize Koutsioukis’ signature flair for design. A portrait of her grandparents, a handsome pair in their day, hangs at the entrance. They slept in gender-specific, color-coded his and her bedrooms, so Koutsioukis used a lot of blue tones in Gregory’s French brasserie setting with plaid wallpaper and mahogany veneer. (Her grandmother gets her due when Maria’s Living Room, a pretty-in-pink cocktail lounge, opens next to the hotel’s lobby in December.)

“I’m trying to create environments that are as soulful as the food,” she says. “We’ve already become an anchor.” 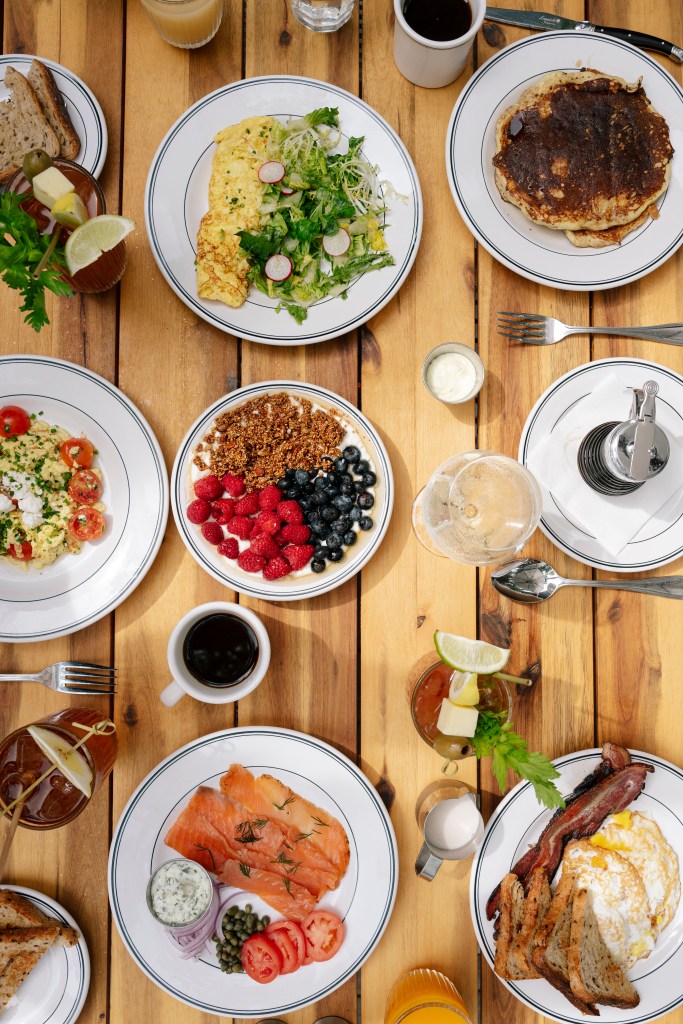 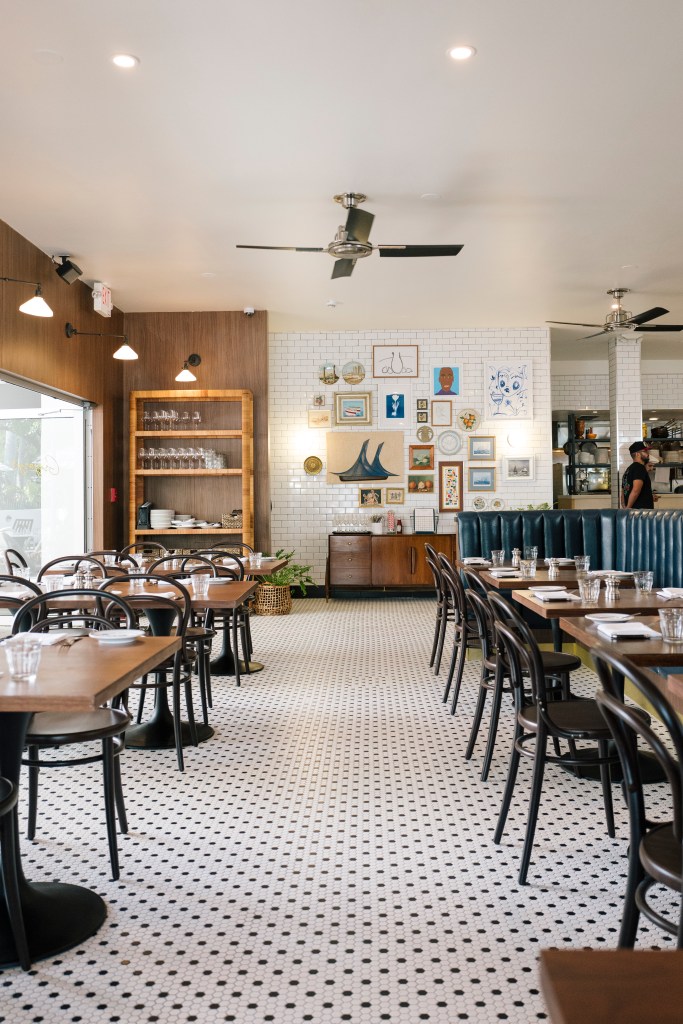 Before the 1980 Mariel boatlift when thousands of Cubans arrived in Miami, the city was Southern through and through. New Yorkers and Jewish émigrés further diluted its regional heritage, as delis and Cuban restaurants competed for clout. Barbecue, a Southern institution, fell by the wayside.

Though not authentically Southern, Brooklyn-born Hometown Bar-B-Que’s outpost here (whose name has been altered to Hometown Barbecue) offers meticulously smoked meats and other staples that pitmaster owner Billy Durney picked up in Texas. It opened in a former produce warehouse kitty corner to the new Rubell Museum in Allapattah, a gritty industrial neighborhood on the verge of gentrification, a similar scenario to the original in Red Hook.

“Barbecue can change a neighborhood quickly — plus we didn’t really have good barbecue here,” says Jeff Weinstein, a Miami developer who partnered in the expansion. “But more selfishly, I wanted to eat at Hometown without flying to New York.”

Even Red Hook regulars should visit the Miami location for exclusive dishes. Being one foot in Latin America, it adds thrice-jerk (brined, slathered and spiced) slab bacon and mole-dusted chicken wings with poblano crema. The latter take four days to make. The place has inadvertently become known for natural wines, too, a nascent movement here.

Per Weinstein, “People automatically think of beer with barbecue, but a crisp wine cuts through the fat better.” 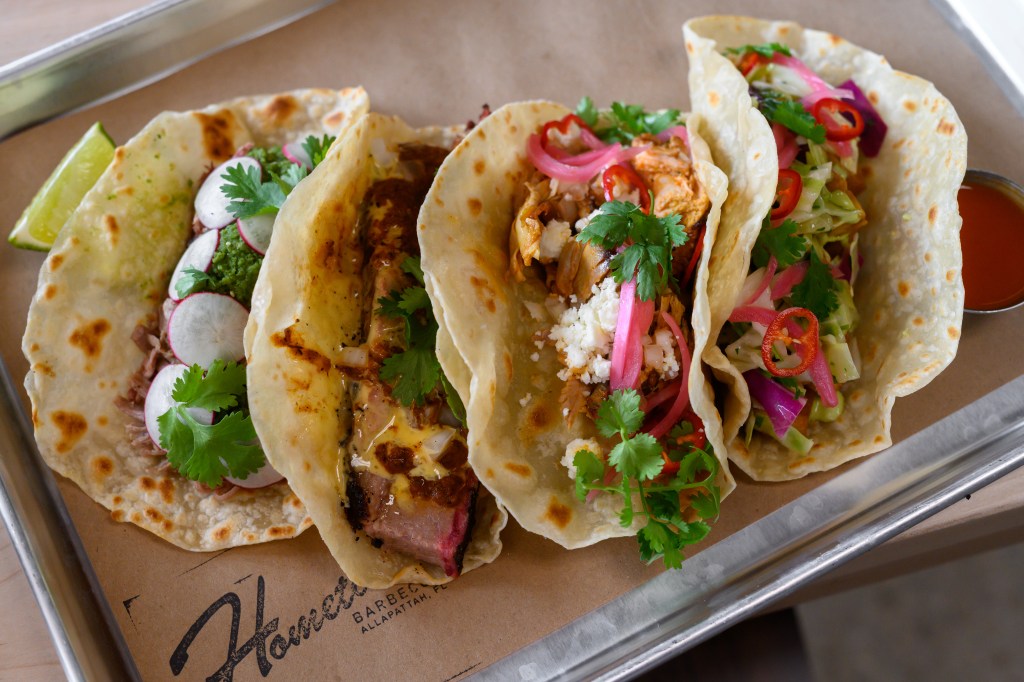 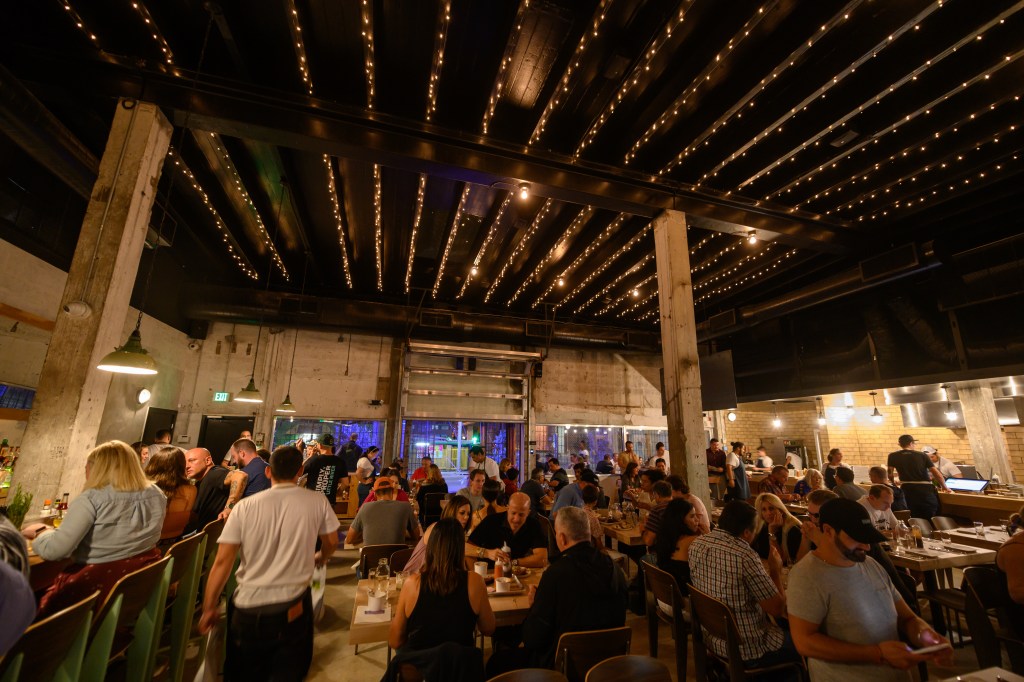