Architect Fabrizio Casiraghi has redesigned the historical establishment, which used to be patronized by Cocteau and Proust.

The Art Deco staircase was designed by Ruhlmann at the time of the restaurant's opening in 1880.

LITERARY HOT SPOT: Opened in 1880, Parisian restaurant Drouant was in serious need of a facelift — but it had to be a quick one.

The historical 1,475-square-foot establishment, which sits just next to the Opera Garnier in the second arrondissement of Paris, needed to be finished in time for the Goncourt Prize, a prestigious French literary ceremony that has been held in a private salon on the upper level of the restaurant every year since 1914.

“We had a very clear deadline,” said Fabrizio Casiraghi, the 33-year-old Italian architect who was tasked with zhuzhing up the Art Deco gem, bought in 2018 by brothers Stéphane, Thierry and Laurent Gardinier, who also own French gastronomy restaurant Taillevent. “The renovations absolutely had to be finished in a year, in time for the 2019 Goncourt Prize.”

The race was completed on time. On Nov. 4, author Jean-Paul Dubois was honored in a freshly redecorated Goncourt salon, following the footsteps of previous laureates Marcel Proust, Simone de Beauvoir and Leïla Slimani, who won the prize in 2016 for her haunting novel “Lullaby.” The restaurant, helmed by chef Emile Cotte, officially reopened to the public on Nov. 12. 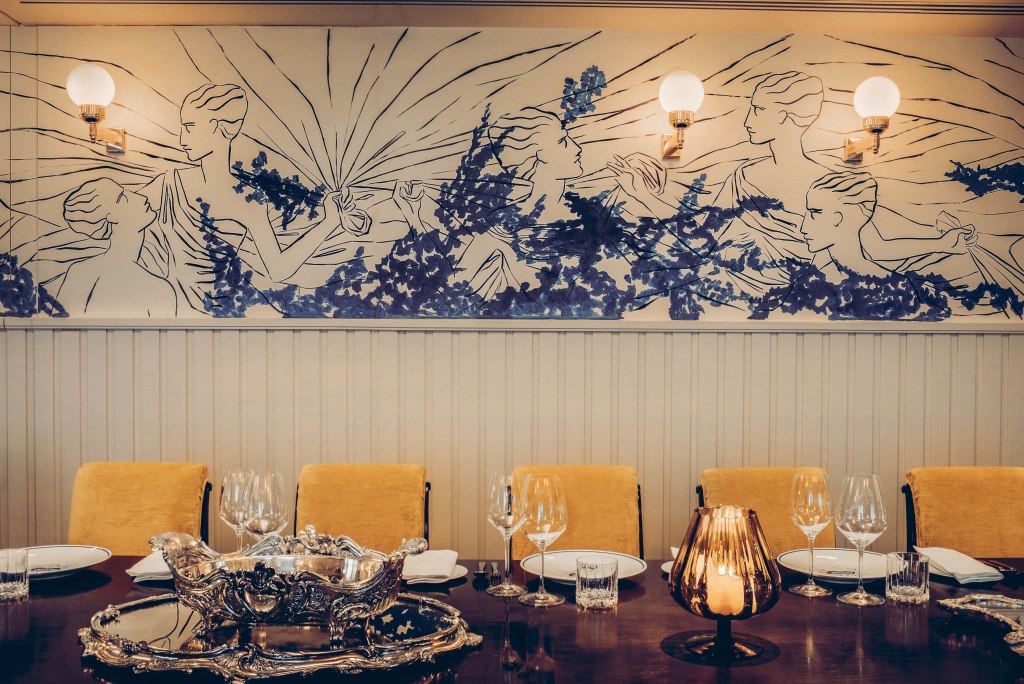 The walls of the Proust salon at Drouant were painted by artist Roberto Ruspoli.  Matthieu Salvaing

The walls of the revamped Drouant still hum with Parisian stories. The features on the original ceiling of the main dining area — plaster casts of fish and crustaceans that used to captivate Jean Cocteau, a regular patron — were molded and replaced, allowing diners to gaze up at the same whimsical trout and lobsters that inspired the French artist.

In honor of Proust’s Goncourt prize, which he received in 1919 for “Within a Budding Grove,” artist Roberto Ruspoli decorated the walls of the Proust private dining salon with drawings of delicate nymphs partially covered with blue flowers.

But the main character celebrated is Émile-Jacques Ruhlmann, the Art Deco decorator who first designed the Parisian institution. Drouant’s standout feature is the imposing mirrored staircase leading up to four private salons, which was created by Ruhlmann and renovated by Casiraghi’s team. It’s unfortunately the only original feature that has withstood the test of time.

“When we ripped out the parquet on the ground level, we discovered Ruhlmann’s original floor design: a colored mosaic created by the architect himself,” Casiraghi said. The ceramic tiles were too heavily damaged to be kept, but Casiraghi paid homage to Ruhlmann’s original idea by creating a stone mosaic, which is more resistant than ceramic. The architect added travertine into the mix, a stone that was mostly used to build Brutalist buildings in Thirties Milan, a nod to his own origins. 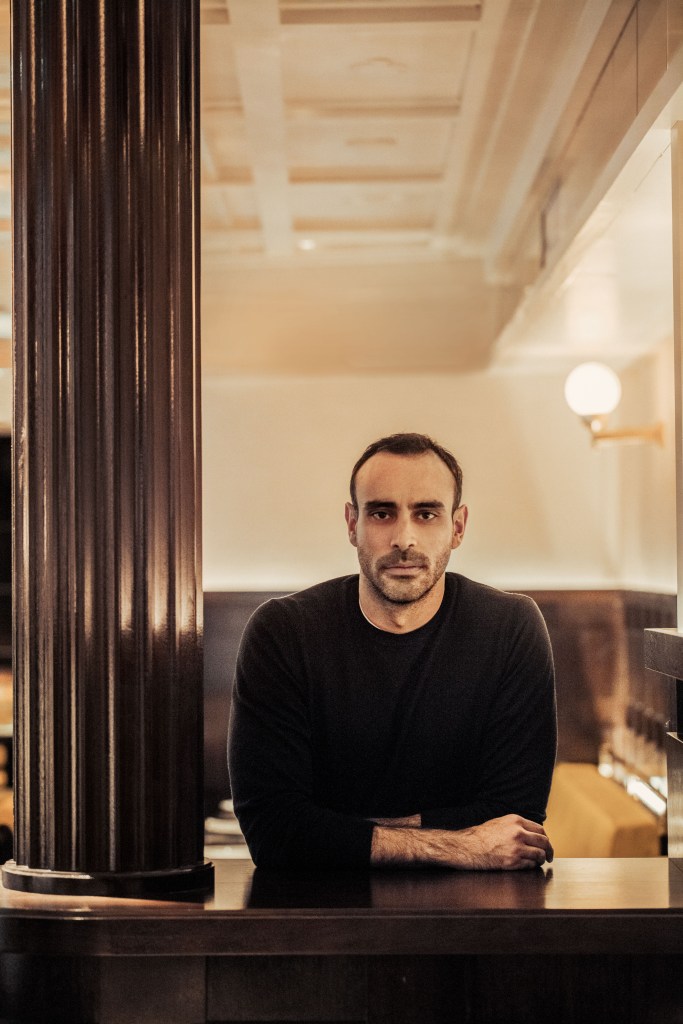 To create a contrast with the dark wood panels covering the walls, Casiraghi chose to cover seating with golden yellow velvet — including the chairs in the main dining room, which were designed based on an original drawing by Ruhlmann.

“We found the original sketches for the chair, which never went into production, at the Chamber of Commerce of Paris,” said the architect, who collaborated with students from the École Boulle to give life to Ruhlmann’s plans. “It was important for us to include the chair in the new Drouant as it’s highly symbolic — it is literally called ‘the Drouant chair.’”

Lighting was also an important detail for Casiraghi. “I wanted there to be an intimate feeling, as if the whole place was candlelit,” he explained. “So we tweaked light bulbs and alabaster light fixtures so as to create a cozy feel. I like the fact that it makes it look like the dining room of a Milanese grandmother.” 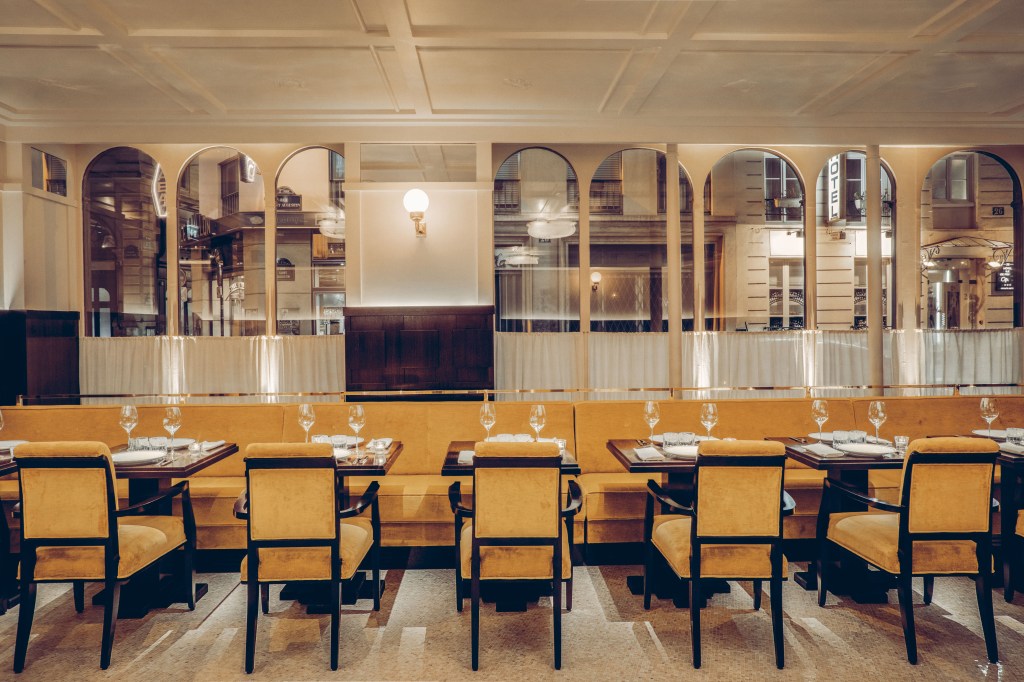 The Drouant chairs were based on a drawing by Ruhlmann.  Matthieu Salvaing