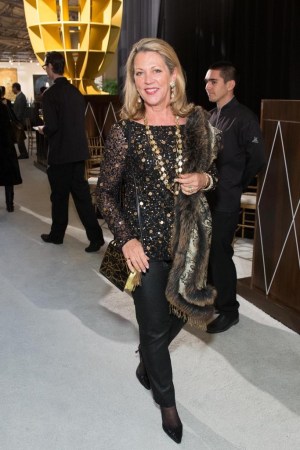 Architect Andrew Skurman designed the handsome urns, inspired by a pair by Art Deco master Jacques-Emile Ruhlmann he had seen in a Paris museum. “I saw the original decorative urns at the Musée des Arts Africains et Océaniens in Paris when I was an architecture student, and always wanted to re-create them,”  said Skurman, creative director for the show. “The theme for the show this year is Art Deco, so I seized the moment.”

Colin Bailey, the new director of the Fine Arts Museums of San Francisco, stood beneath the urns admiring their design and discussed his new David Hockney show that’s just opened at the de Young Museum. “We have portraits in the show he completed three weeks ago, and no one has seen them,” Bailey said. “Hockney had a burst of inspiration, and the museum show is richer for it.”

Designer chair of the event, Suzanne Tucker, who recently published her second design book, “Suzanne Tucker Interiors: The Romance of Design,” was feeling a little overwhelmed by the demands of book promotion and lectures. “I wish I had a twin or a clone that could give my speeches and sign books for me,” she sighed. “I have to take care of my design clients and run a business.”