In 1979, artist Mierle Laderman Ukeles shook the hand of every New York Department of Sanitation employee. She visited the city’s 59 DSNY districts over 11 months, shaking hands with 8,500 workers and repeating the same sentiment to each person: “Thank you for keeping NYC alive!” That performance piece, “Touch Sanitation,” celebrated the unseen labor of the city’s maintenance workers, a central subject of her art.

Forty years later, the artist has reprised the essence of “Touch Sanitation” through a three-way public art initiative with the Queens Museum, Times Square Arts and MTA Arts & Design. Her new piece, “For ⟶ forever…” is displayed on a digital billboard in Times Square and on screens in various subway stations, and adorns the exterior facade of the Queens Museum, visible from the Grand Central Parkway. At the start of the pandemic, frontline medical workers in New York received daily public displays of thanks through coordinated cheering. Ukeles praises those workers, but through this new project aims to cheer on a different essential worker — sanitation and transit workers — mostly excluded from those public displays of gratitude.

Although touching strangers — or even acquaintances — has all but vanished from 2020 life, Ukeles wanted to re-create the gesture of human touch that was so inherent to her 1979 work. “For ⟶ forever…” is visually minimalist, but rooted in a similar human presence. It also speaks to the reality of digital interaction with loved ones during the pandemic. Through Ukeles’ own handwriting, digital screens in Times Square and throughout the subway system unfurl her message of thanks: “Dear Service Worker, Thank you for keeping NYC alive!” The words appear as white script on a black background, bookended by flashes of a red screen and fluorescent green screen. The work takes a slightly different form at the Queens Museum, where the text is scrawled on static strips of fluorescent green “tape” and bordered by red bars. Ukeles integrated the colors as universal signifiers of importance and attention to safety. 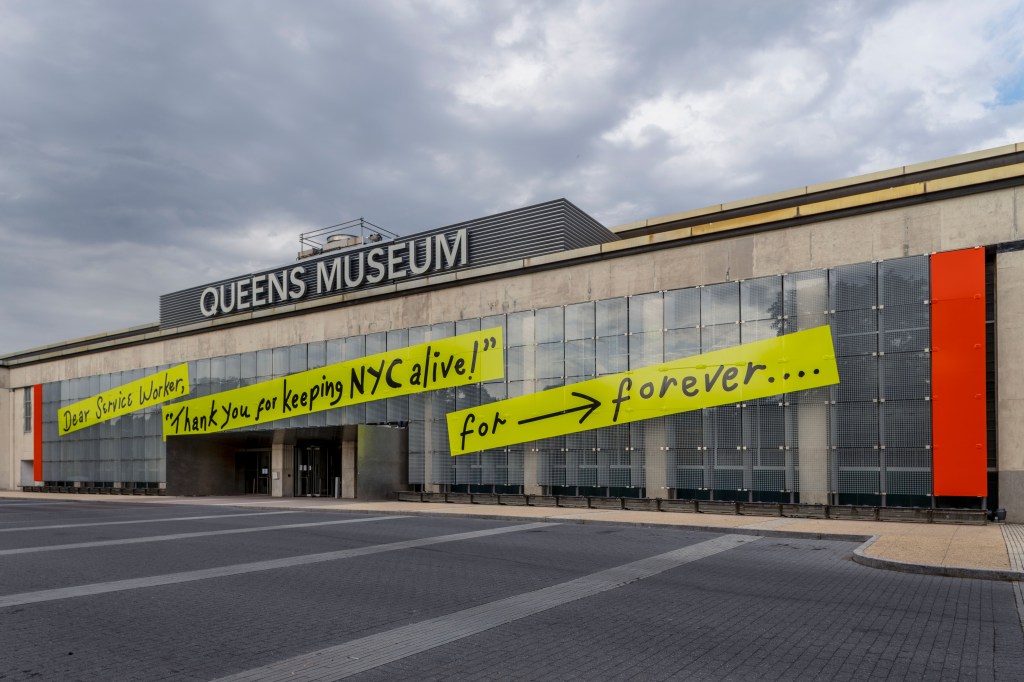 “When I got involved with sanitation in 1979, it was the height of the fiscal crisis. People’s uniforms were really pretty shabby,” says Ukeles; she’s served as the DSNY’s artist-in-residence ever since, an uncompensated position. “As things got a little better, their uniforms got a little better. Now the sanitation workers have fluorescent safety green vests.…That’s a revolution. That happened just a few years ago. It means ‘I am important. Look out for me.'”

As part of her artwork from the Seventies, Ukeles wrote a “Maintenance Manifesto” detailing her philosophy on the idea of maintenance. Through her writing, she posed big questions, such as: “The sourball of every revolution: after the revolution, who’s going to pick up the garbage on Monday morning?” “These workers during the pandemic, they expose themselves out on the street every day. And we ask them to do that. We need them to do that,” says Ukeles, who has been in Jerusalem with family since March but considers New York home. “If you think of the city as our home, it’s the sanitation workers that are keeping it home.”

To Ukeles, these workers are the heart of the city’s infrastructure — and she regards the Sisyphean nature of maintenance work, although undervalued, as integral to keeping the city alive and vibrant.

“You want culture, this is the beginning of culture: moving garbage, keeping streets open, moving the flow of material from coming in, being created, being used,” she says. “Like the subways, keeping the trains running. People have to get a job. You want to have a big city, people have to get from here to there. They have to count on it. It has to be safe. It has to be clean. These are fabulous things.”

And for all of that, you have an essential worker to thank. 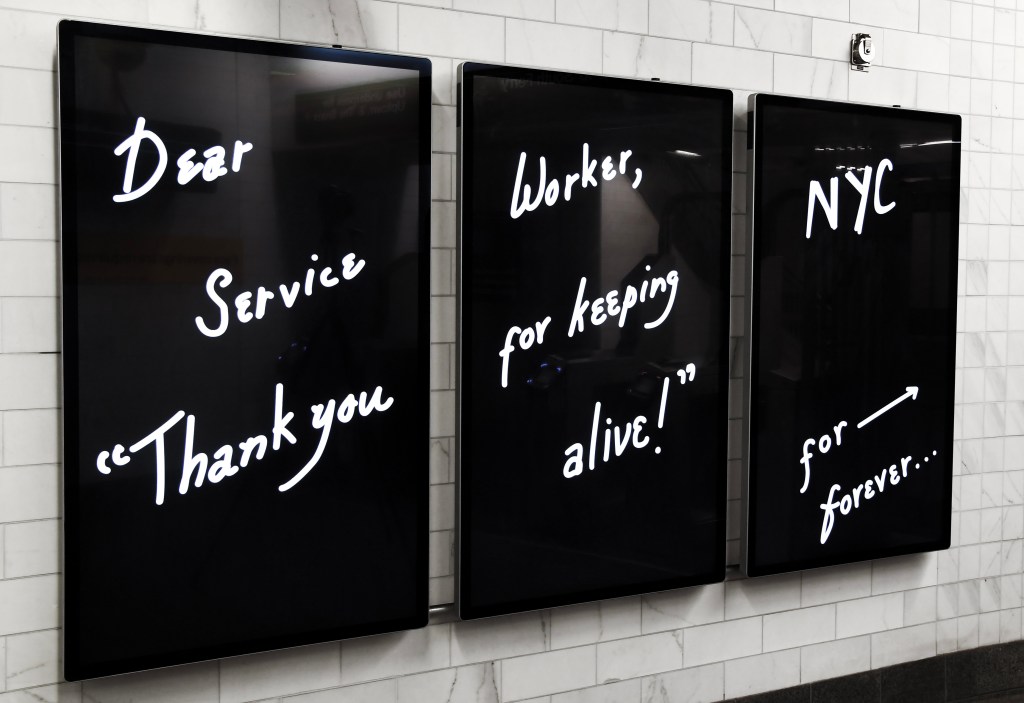 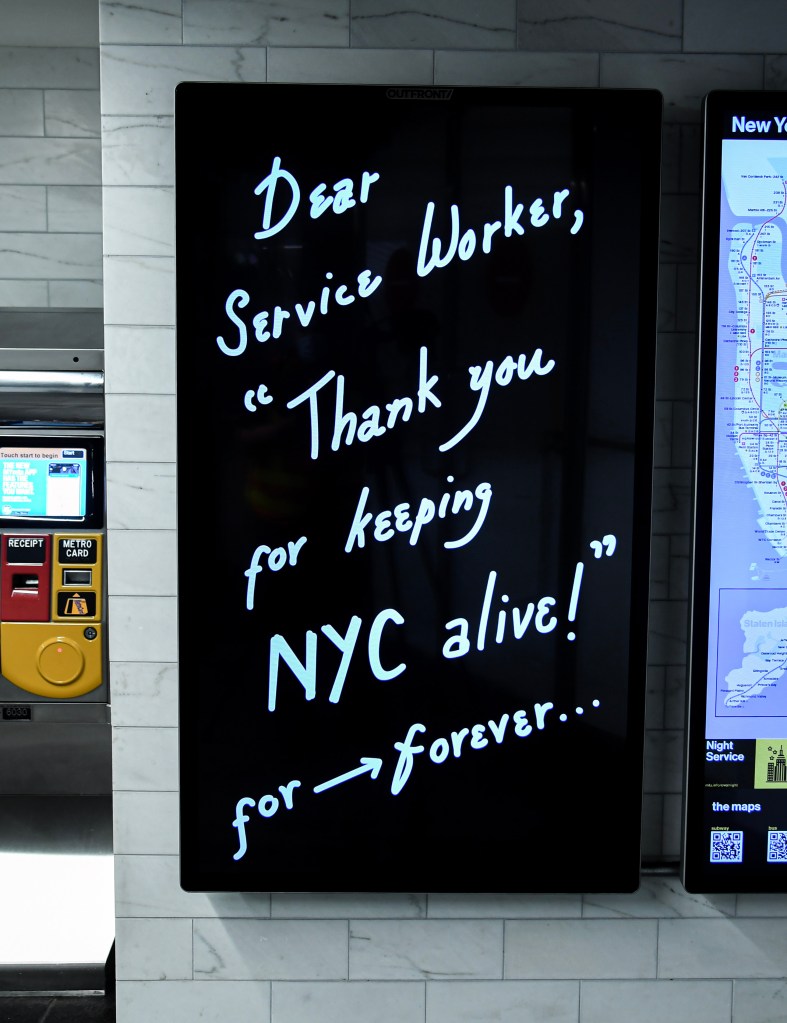