Where to Dine, Shop and Party in Aspen This Summer

Our cheat sheet to the town's top places and happenings.

From great eats to outdoor movies, summer in Aspen is chockful of activities for everyone.

Sunburned at the beach? Cool off in the mountains with a trip to Aspen, where summer brings much more than hiking and biking. Here, our cheat sheet for the top places and parties.

Patios to Park Yourself
After Hurricane Irma barreled across St. Barts in 2017, the restaurateurs behind the island’s Bonito, Laurent Cantineaux and Juan Carlos Pérez Febres, fled to Aspen. There they discovered that many of their patrons also own vacation homes in the mountainous resort town.

“It’s St. Barts in the mountains,” said Bema Alvarez, maître d’ of the duo’s Betula, whose terrace is the place to be, like its sister property. “We’re known for our sunsets at Bonito, and here we have views of Ajax and Red mountains.”

A few favorite dishes came with them to Aspen, while a section of the menu is devoted to Chef Cantineaux’s shiny new toy, a French rotisserie for Peking duck to Colorado rack of lamb. Buttery, lemony half and whole chickens with potatoes roasted in pan drippings seem to deliver the most Proustian satisfaction, though.

“We only make a limited amount, so they sell out,” said Alvarez, who can seat up to 200 diners when the weather cooperates.

The slice of St. Barts extends to libations by Miami’s Cocktail Cartel, which designed 10 types of glasses for gourmet drinks with bar-made tinctures (basil birch) and shrubs (strawberry balsamic). Daily DJ sets get the party started, too.

“We aren’t a club but won’t say no to dancing,” she said. 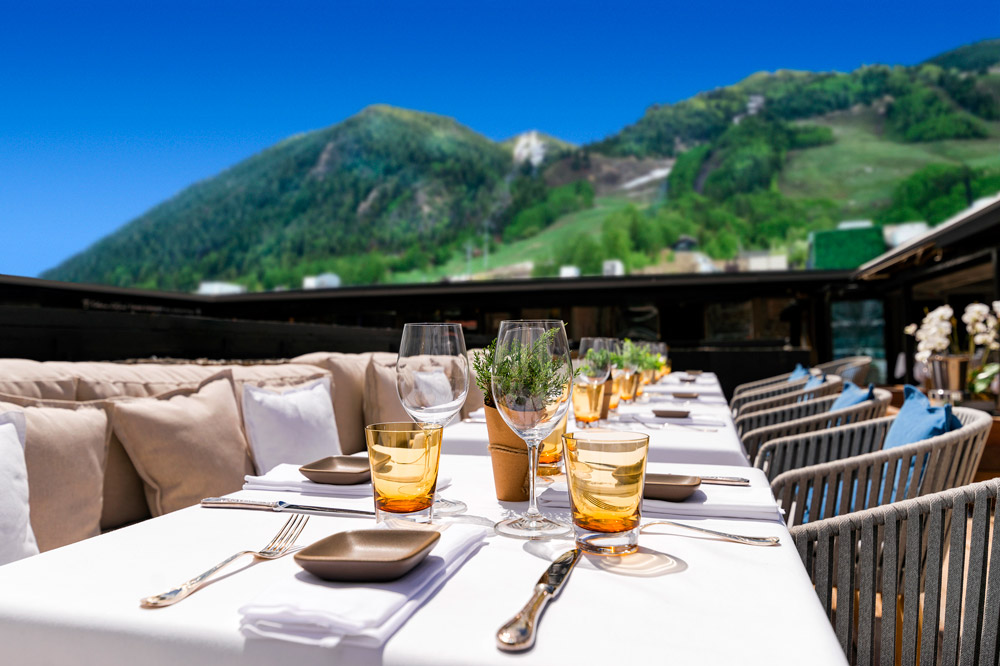 The terrace at Betula.

It’s been a quarter of a century since a new hospitality brand in a property built from the ground up has come to town. When the 88-room W Aspen opens slopeside in August, it will also be the premiere W Ski Escape North America, as well as the first hotel in town whose rooftop pool deck welcomes non-guests with open arms. The 12,000-square-foot amenity — ski-bunny bait complete with disco dancing — is part of the overall theme that conjures vintage Aspen. Decor mines locals’ bohemian lifestyle that spans a Victorian-era red light district to the promiscuous, hot tub-hopping Seventies. The presidential suite’s crystal-caged, circular bed on a swivel platform takes it to the extreme. The lair is modeled after the Copper Palace, a nearby manse owned by Hugh Hefner’s one-time flame Barbi Benton. 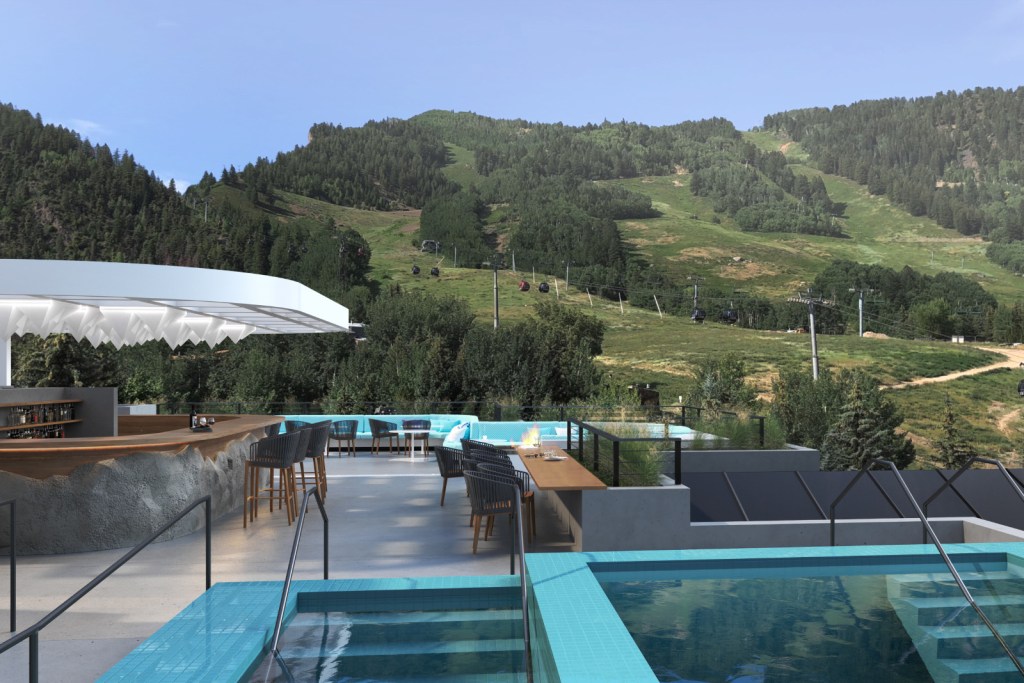 The five-year-old Grey Lady graduated to Mr. Grey. The rebranding encompasses menu upgrades like trout pâté and caviar platters courtesy of wd-50 alum Jon Bignelli, while the spacious patio remains as fabulous as ever. Christen new dishes and digs with prosecco and grapefruit sangria. 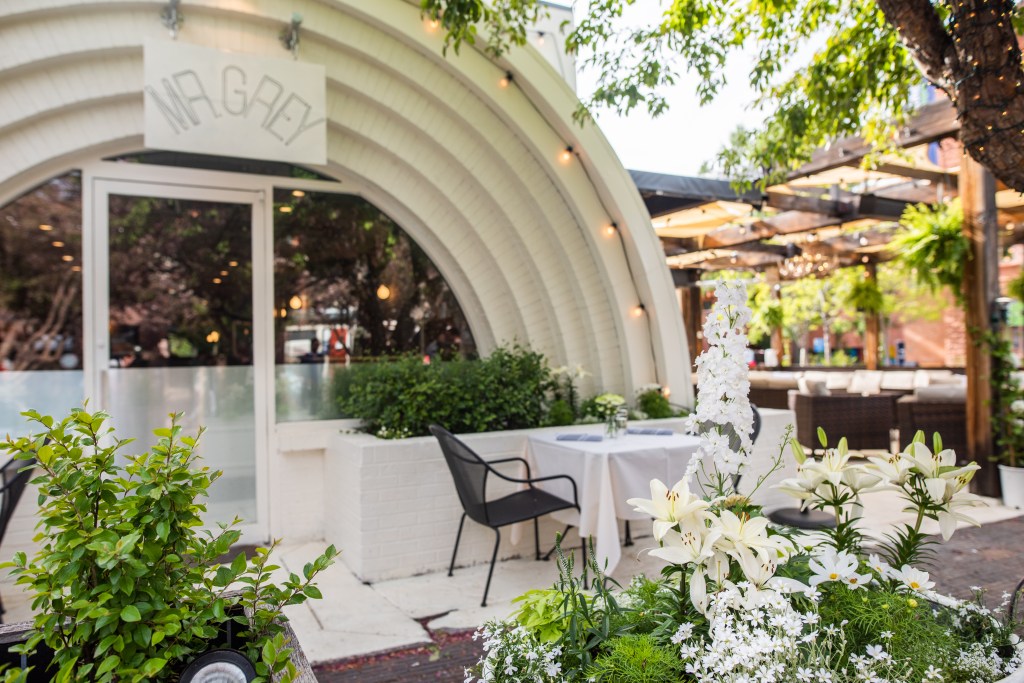 “Our bicoastal and Chicago clients also love to dine and shop here,” said president and chief creative officer Kristen Cole, of her go-to spot in the Rockies.

In addition to exclusively stocking Rosie Assoulin and the designer’s new everyday offshoot, By Any Other Name, the store caters to art collectors with DRx Romanelli x Richard Prince’s limited-edition kimonos and Ts and L’Objet x Haas Brothers’ home collaboration. The latter pops up all of August, with an artist meet-and-greet on Aug. 3. Sage & Salt, a modern mysticism line whose offerings include Smokeless Smudge, swings by July 26 and 27 for a trunk show with tarot card readings. 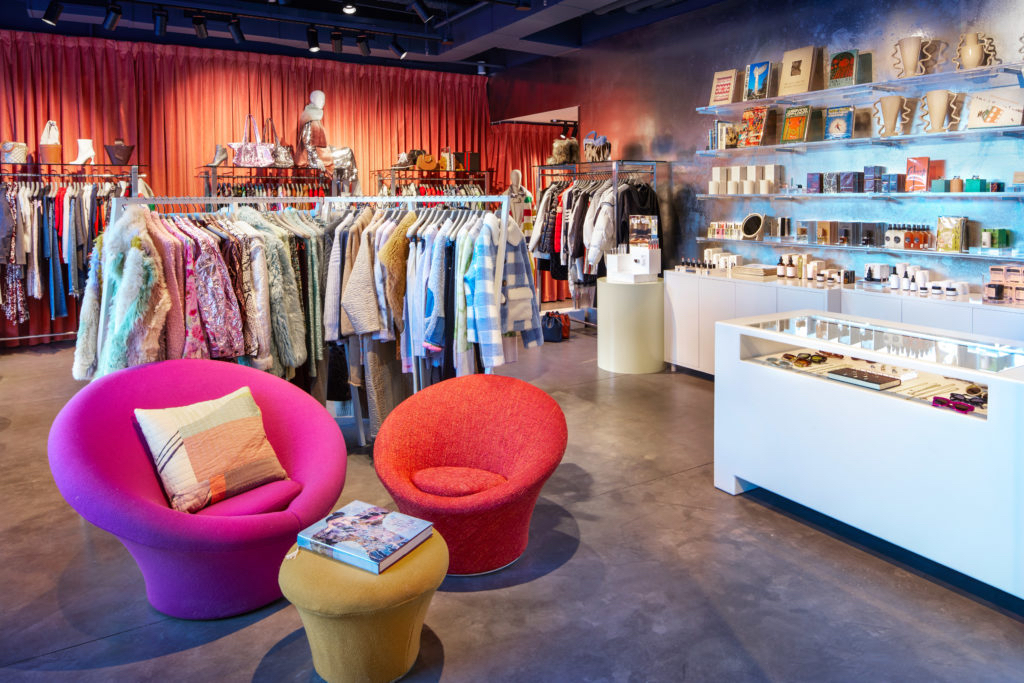 Having met her husband in Aspen, Bumble founder Whitney Wolfe Herd shares the love with her dating app’s lounge at Kirby Ice House’s seasonal pop-up. Around sunset, the family spot for thin, crispy fries and craft brews turns into a 21-and-over up singles bar. Drink discounts for Bumble users help break the ice and hopefully seal a summer romance.

It Takes Two Hands
Sweethearts Luigi Giordani and Gretchen Leary are putting the final touches on Duemani, the Italian seafood follow-up to their pizza and pasta-oriented Acquolina.

Support in Style
Digitally native do-gooder Olivela launched a permanent, brick-and-mortar boutique for women’s designer collections by Dior, A.L.C., Victoria Beckham and more. Along with regularly donating 20 percent of sales to Malala Fund, CARE and Too Young to Wed, it supports local charities Aspen Center for Environmental Studies in July and Aspen Education Foundation in August.

Snowmass Sojourn
Take a breather with a day trip to Aspen’s chill neighbor.

Power Yoga Retreats hosts Yoga on the Mountain with extra activities like meditation and hikes from July 19 to 21.

The Collective, a new, all-purpose space at Snowmass Base Village, partners with Aspen Film for Movies Under the Stars’ dusk-timed screenings of classics from “E.T.” to “The Princess Bride.”

Ride Elk Camp Gondola to its namesake restaurant for farm-to-table dinners with live tunes every Tuesday in July and August. Kids can run around as parents feast on regional bounty and stargaze. 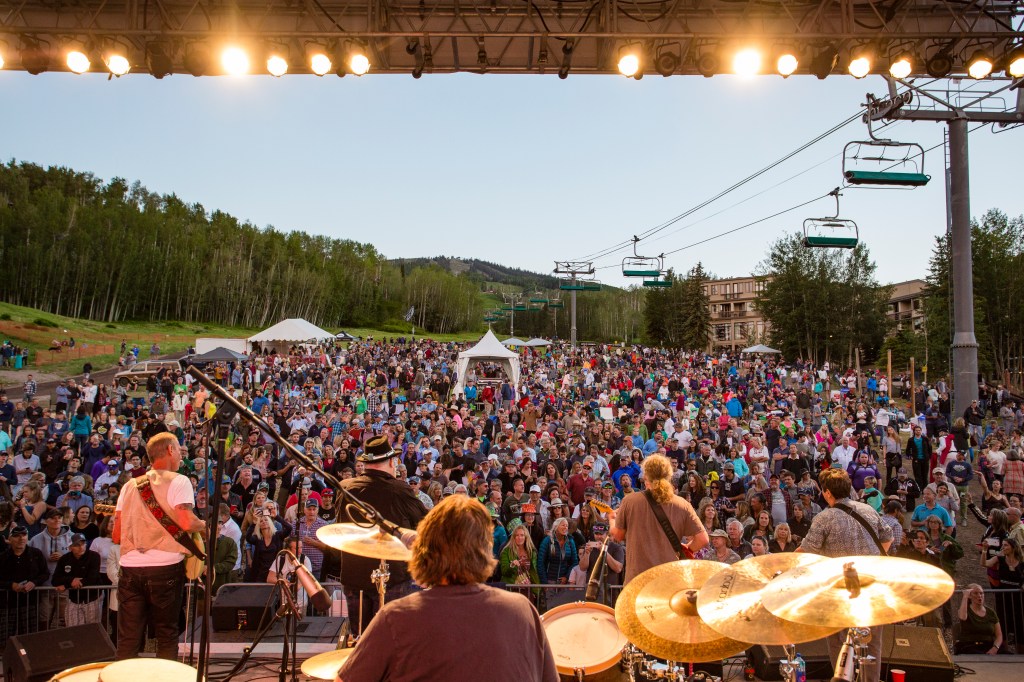 Culture With Class
Warm weather brings the hottest art parties of the year.

National YoungArts Foundation chair and new mom Sarah Arison accepts the Service to the Arts Award at the Anderson Ranch Arts Center’s 23rd annual Recognition Dinner on July 18. The gala, which gussies up its longtime home at Hotel Jerome with a site-specific installation by Sung Jang, also will honor Nick Cave with the International Artist Award. Catch both in conversation on July 17 and 18, respectively, among summer speakers including Sir Paul McCarthy and Beth Rudin DeWoody for the Ranch’s ongoing series. 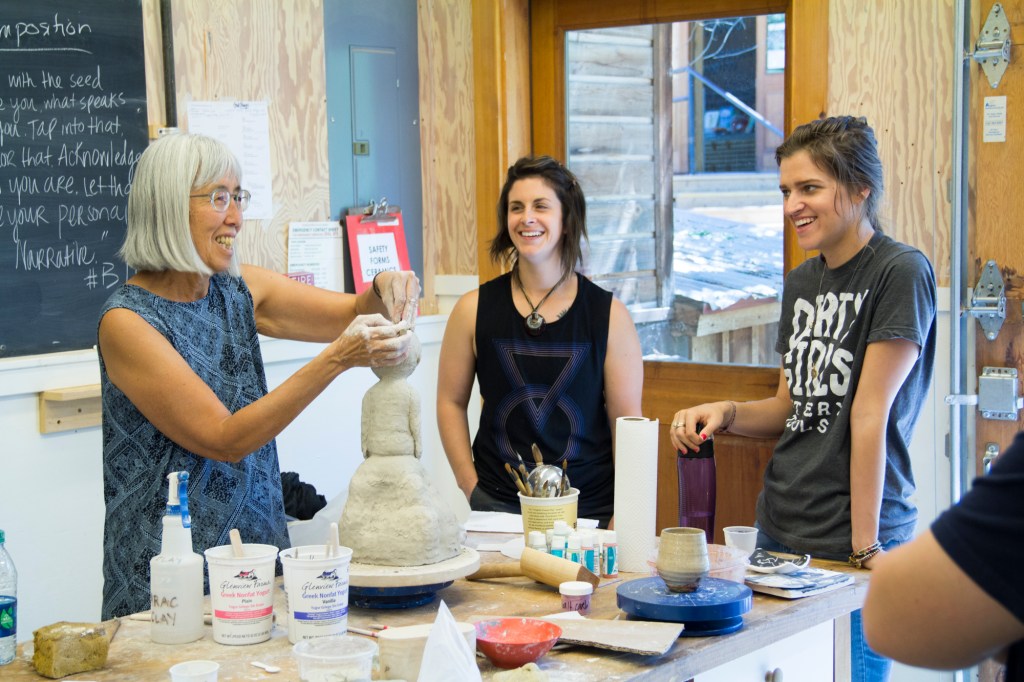 Aspen Art Museum is officially over the hill but only in years. It celebrates the big 4-0 with solo exhibits by Swiss artist John Armleder and Rashid Johnson, whose collaboration with choreographer Claudia Schreier for a specially commissioned video and sold-out performance is a first for the New York-based artist. Artcrush, the museum’s scene-y summer benefit from July 31 to Aug. 2, turns 15, too. Lisa Yuskavage will be honored with the 2019 Aspen Award for Art during its live auction and dinner at Buttermilk ski area. 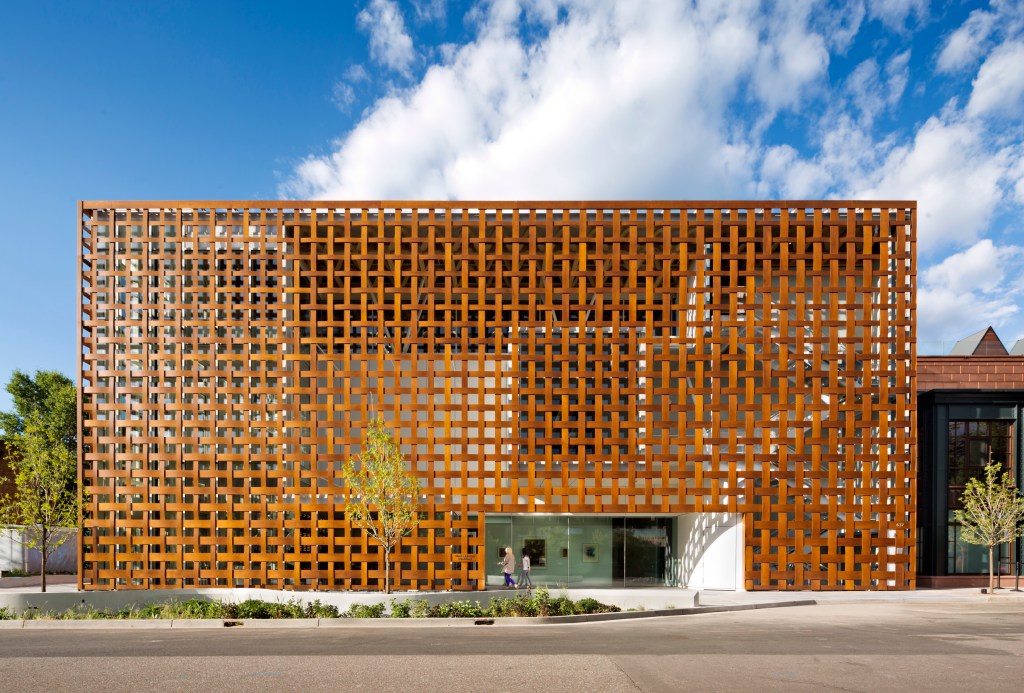 It Took Lisa Taddeo 8 Years and 6 Road Trips Across the U.S. to Write ‘Three Women’

Will Poulter is Scared of the Sun After ‘Midsommar’