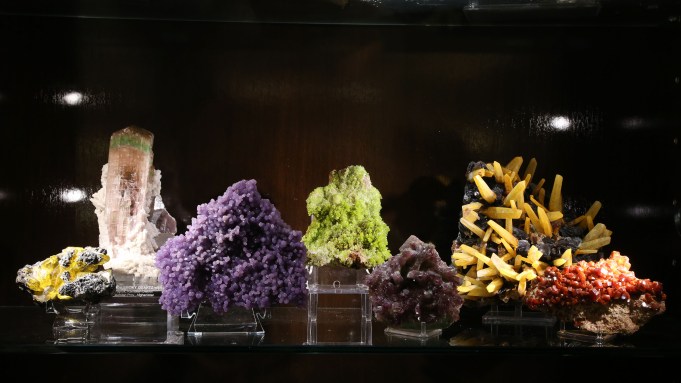 It’s no secret that Millennials are fascinated by the healing powers of crystals. Katy Perry once told Cosmopolitan magazine that she carries around “a lot of rose quartz, which attracts the male.” Adele used to hold crystals in her hand during performances to combat her stage fright. Miranda Kerr keeps a heart-shaped rose quartz in her bra, and Kim Kardashian’s upcoming fragrance was reportedly inspired in part by a visit to a crystal warehouse.

Perhaps the most famously crystal-obsessed Millennial is Spencer Pratt of MTV’s “The Hills” fame. The reality star told People magazine that he’s spent up to $1 million on crystals alone.

A million-dollar crystal collection might seem excessive, but at some high-end crystal shops, a single stone can sell for that amount — or more. Take, for example, a bicolor pink tourmaline valued at $1.2 million. (Pink tourmaline has properties relating to love and relaxation.) This rare stone and others are sold at Manhattan’s Astro Gallery of Gems.

“[Millennials are] definitely carrying it forward, but there’s been a large population of interest over the years,” says owner Dennis Tanjeloff. “There’s been a huge explosion in the early Eighties that has carried forward and it has become extremely mainstream and this new, young generation is definitely captured by it and they’re all very involved. Even the big socialites in the groups are all here shopping and part of it.”

Founded in the early Fifties, the family-owned business now has more than 10,000 minerals and fossils on display at its Fifth Avenue location. Tanjeloff draws upon his worldwide connections to curate the store’s offerings, personally sorting through his agents’ picks.

“There’s many different types of clientele that come here,” he says. “There are the collectors that do buy these things for investment and for a collectible — like other collectibles in the world, they’re a passion or hobby. Then there’s our interior designers who buy this for home decor and for enhancing their home. And then there’s the holistic market that buy this for the metaphysical.”

The gallery’s celebrity clientele has included Cameron Diaz, Goldie Hawn, John Lennon, David Letterman and Salvador Dalí. Some of the most prized offerings are: a watermelon tourmaline from San Diego ($150,000), a topaz from Burma ($200,000) and a 240-carat ruby from Burma ($600,000). The best-selling crystals are amethyst and quartz — particularly rose quartz, which is known as the love stone — and the oldest rocks in the store are the meteorites, some of which are more than two billion years old.

Why are Millennials so fascinated with crystals? Tanjeloff thinks it has to do with the pervasiveness of technology.

“We live in a world of supertechnology and a lot of computers and gadgets and equipment,” he says. “Sometimes it’s a little more grounding to come back to Mother Nature and the formations of the earth.”

Is ‘Dynasty’ the New Big Fashion Show on TV?