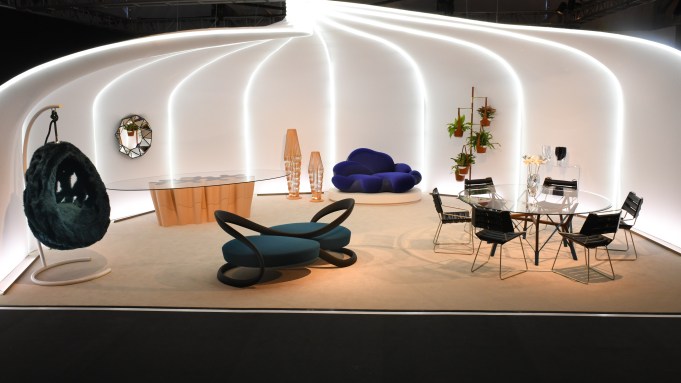 Louis Vuitton has brought its Objets Nomades collection back to Miami, with a few additions in tow.

New to the travel-inspired collection of functional furniture and objects are Atelier Biagetti’s Anemona table, Atelier’s Oï’s Serpentine table and Tokujin Yoshioka’s Blossom vase. Those items and more, including two new versions of the Campana Brothers’ Cocoon swing chair and André Fu’s Ribbon Dance chair, are on display at Design Miami/ and installed at the fashion house’s Design District store.

The Anemona table marks Atelier Biagetti’s first design for Objets Nomades. Designer Alberto Biagetti and artist Laura Baldassari are behind the Italian design studio, whose practice is informed by “expressive functionality” and rooted in storytelling and explorations across disciplines. For Objets Nomades, the duo built upon a ubiquitous object — a table — approaching it instead as a conceptual study, using their two shared hometowns — Ravenna and Milan — as a starting point.

“The Anemona table, as you can guess from the name, is a table inspired by the sea. When we started to work with [Objets Nomades], we decided to think about water and not about the ground. We are from a seaside country, so we are used to thinking about water as the best way to travel around.”

The concept of movement is reflective in the table’s leather rippling base, its interior crafted with a deep blue lacquer. “People today see the idea of traveling as a luxury or inconvenience. Some believe they can see the world just as well from their mobile deice, which are the windows into the world,” Baldassari adds. “So we can literally travel anywhere.”

The idea of interacting with water also builds upon the offerings in the Objets Nomades collection, which the designers see as more rooted in interactions with the air and ground.

“All the objects of the collection are really nomads. Nomad from the real meaning of the word — another point of view,” says Biagetti. “It’s less physical interaction, it’s more psychological interaction. The point of view pushes you to grow; it’s a liquid.”

The design firm works in studies of contrast — between human nature and social development, between art and design and fashion, and in the case of this collaboration, between France and Italy. Working with the concept of distortion, the atelier is interested in exploring ways to take items from one environment and build them in a new environment in a different way.

“We like stories, and we like making stories,” says Biagetti. “It’s more interesting to build an object for us, which is a real story which can bring together many things. In this case, our story of the city where we were born, craftsmanship, and the way to try to push boundaries between fashion and design, try to figure out how this object can become real objects in domestic and public spaces. This is really interesting because it’s a different way to think about form and function together.”

The duo, who arrived in Miami over the weekend, are looking forward to experiencing design ideas presented during Design Miami/, describing the fair as one of the most important design events in the world.

“You can go around and you can find solutions, see people,” he says of the boundary-pushing nature of the fair. “Our world is a form of entertainment. We are movie makers — we’re not designers, because when we design something, we try to figure out how to build a new story around our objects. So our objects are like actors in that affect. The objects are actors and they can act directly, they can tell you things, they can interact with you.”

“It’s a big family with many different characters,” says Baldassari. “It’s nice to be part of that family.”