“I would just walk down the street and show people a picture of the mural and be like, ‘Have you seen this before?’”

The bald eagle mural, part of the Audubon Mural Project.

For 14 years, photographer Gail Albert Halaban has worked on a project called “Out My Window,” for which she took voyeuristic pictures of people in their houses through their windows in Paris, Italy, Istanbul — and New York, from the window of her own Manhattan home.

She’d recently purchased her apartment — having moved to New York City from Los Angeles and given birth to her daughter the same weekend she signed the deed. She was a lost new mom in a sprawling, isolating city. “Out My Window” was an effort to combat loneliness.

But her latest work, the “Audubon Mural Project: Photographs by Gail Albert Halaban,” which opens at Aperture gallery tonight, flipped “Out My Window” and all that feeling of desolation on its head.

“I was actually incredibly surprised,” Halaban says over the phone. “I have to admit, when I was asked to photograph some pictures of walls, I thought I would be photographing the pictures on the walls.

“But actually, I’m photographing how the pictures on the walls transform the community and the people around it.” 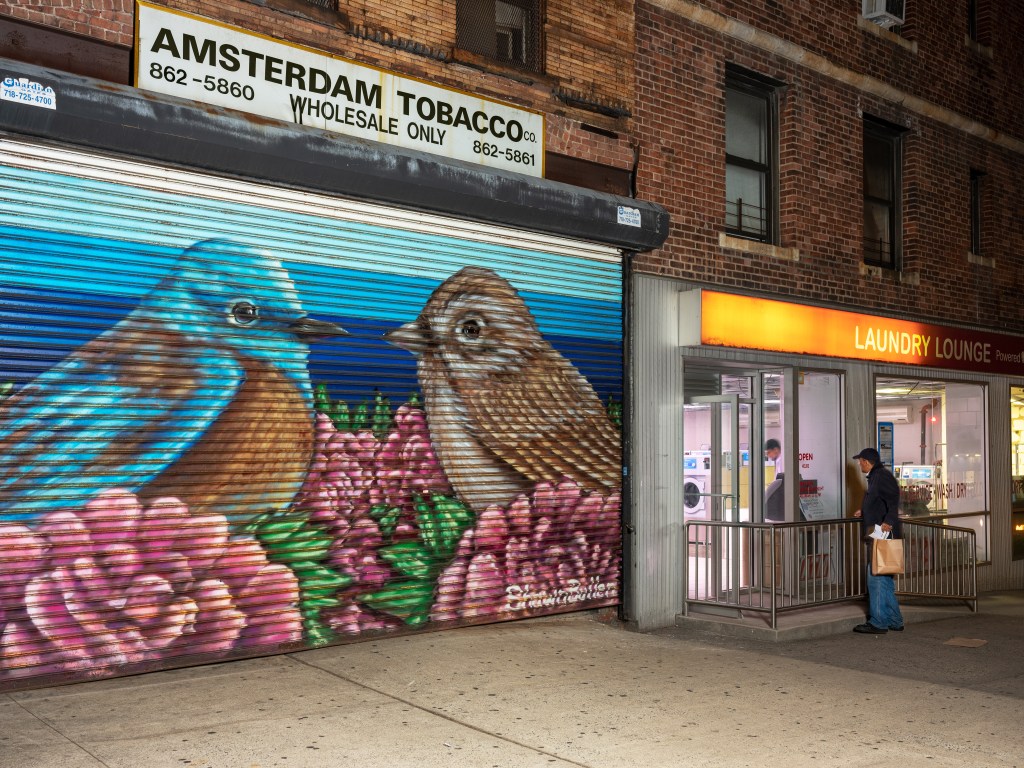 A mural of the Western Bluebird and Rufous-crowned Sparrow featured in Gail Albert Halaban’s exhibition of the Audubon Mural Project.

Beginning in 2014, the Audubon Mural Project has commissioned artists — some fine-art painters, others masters of graffiti — to paint murals on the metal gates and walls of buildings in New York City’s Washington Heights and Harlem neighborhoods. Since then, more than 100 birds — a bald eagle, Western bluebird and Rufous-crowned sparrow among them — have been painted; they are all species under threat of extinction as a result of climate change. Jill Fairchild, wife of the late, legendary WWD editorial director and publisher John B. Fairchild, became fascinated with the project, and tapped Halaban to photographically document some of the paintings, enshrining them in eternity — something that doesn’t exist in New York, where fast business turnover and the city’s grime renders street art fleeting.

“I thought there should be an artistic and documentary record of the murals, and an exhibition, because these murals are ephemeral, soon damaged by weather or graffiti, and to spread awareness about the project, and the fragility of our bird population,” says Fairchild in the catalogue of the exhibition, which she is sponsoring. “Our lives are enriched by the diverse beauty of birds, and their song. So now, let us celebrate the birds of Harlem.”

When Halaban agreed to take on the project, she had just ditched all of her old camera equipment and bought entirely new gear. The tripods she’d used to shoot stationery pictures of people from afar for “Out My Window” were replaced by a backpack stuffed with on-the-go gear she brought along while photographing the murals. 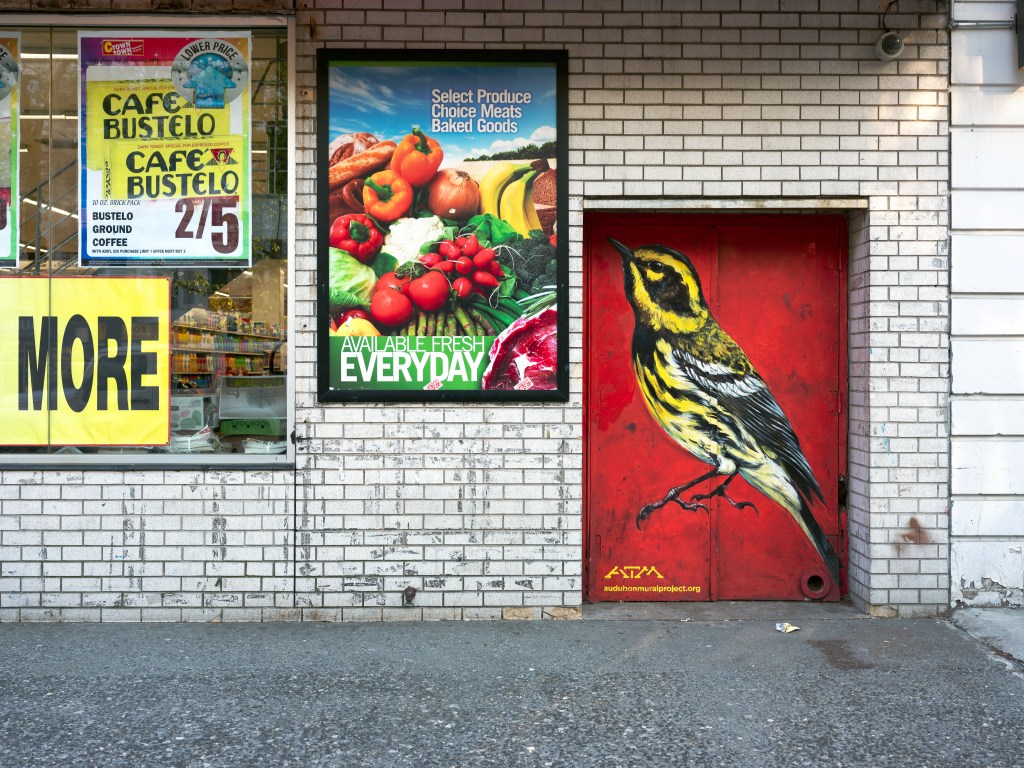 This photo of the Townsend’s Warbler will be featured in Gail Albert Halaban’s exhibition of the Audubon Mural Project.

Halaban also at times took along one more thing as she roamed the streets uptown to visit each painting: Avi Gitler, the owner of Gitler & gallery who initiated the Audubon Mural Project with the National Audubon Society five years ago. He’s a native of Washington Heights, and occasionally lent a hand to Halaban — who works as the creative consultant of visual arts programming in the medical humanities and bioethics department at Columbia University by day.

She’d finish teaching at 4 p.m. and then wander the streets of Washington Heights. 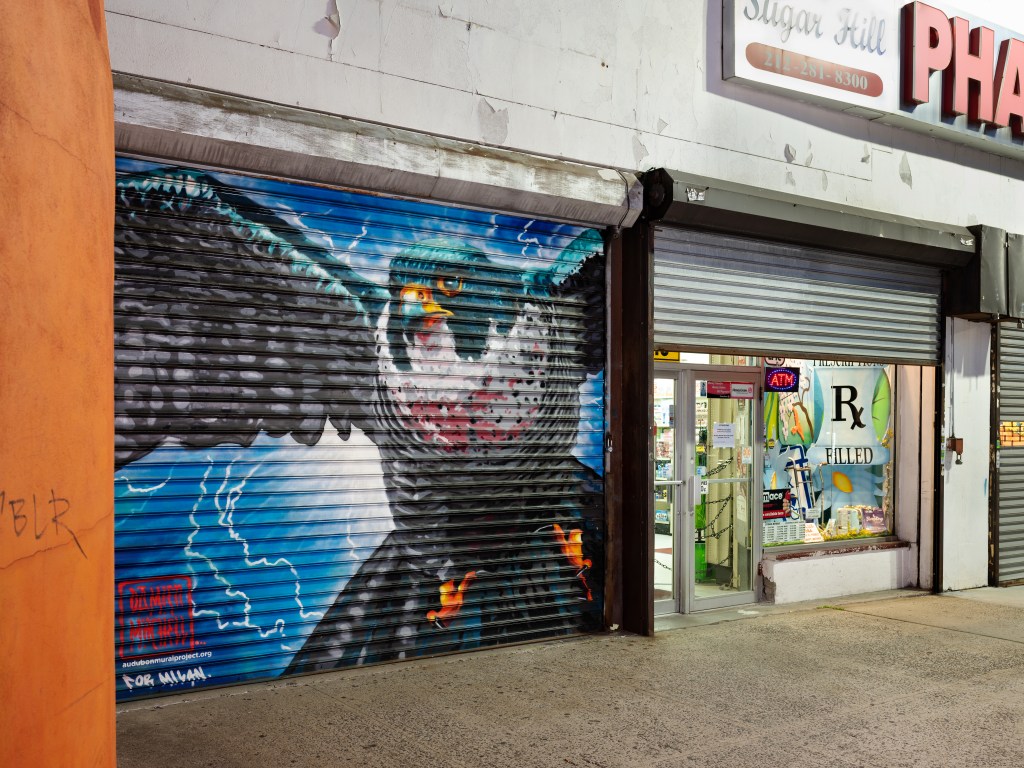 A mural of the Peregrine Falcon can be seen at Aperture Gallery.

Even though she often photographed by herself, she was never completely on her own. Neighborhood folks noticed her bulging backpack and struck up conversations with her, answered her questions and helped where they could. It was the exact opposite scenario of “Out My Window.”

“I would just walk down the street and show people a picture of the mural and be like, ‘Have you seen this before?’” she says. “I got to know people in the neighborhood. I had to go on a roof, so I would have to try to find the super of the building or find a resident to let me in. I’d go to stores, figure out when the gate was going to be closed, and I’d have to get the store owner to help me out. Often, in Washington Heights, on a Saturday night people will be parked outside having a barbecue or hanging out. So I’d have to work with the neighbors to photograph these murals in the most beautiful way possible.” 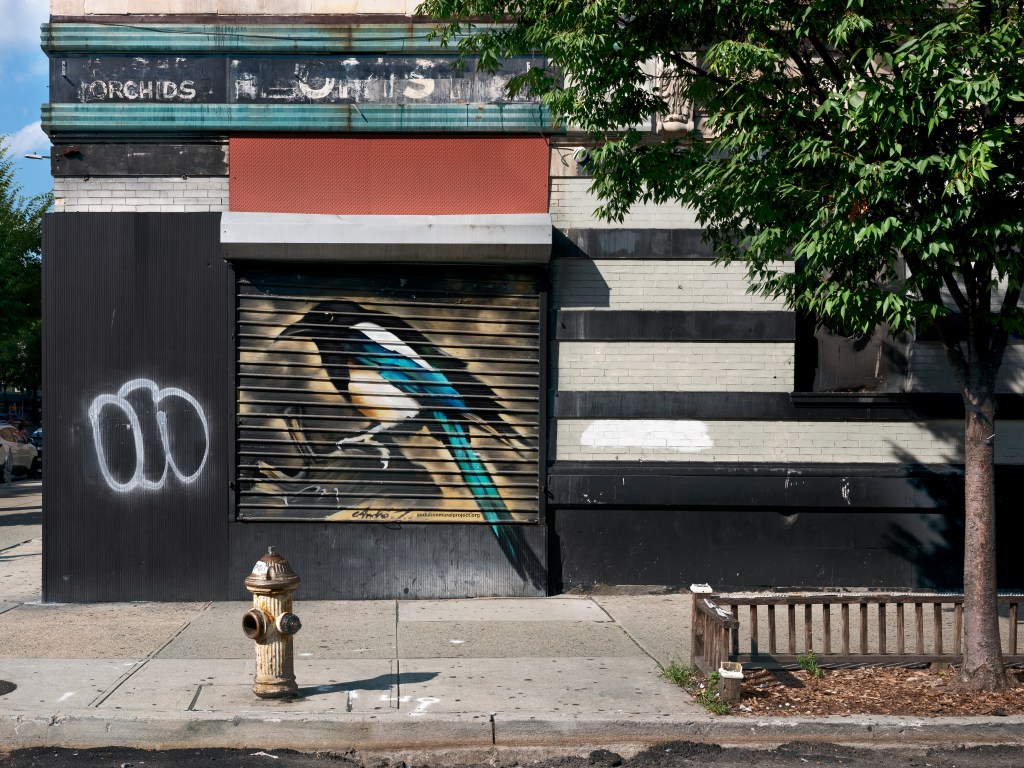 The Black-billed Magpie will be featured at the Audubon Mural Project exhibition.

Halaban is considering taking the project nationwide, photographing more murals in different cities. But she’s not sure it’ll work. The sense of togetherness, the street canvasses, the fast pace and changing storefronts, and this feeling of community might be singular to New York City.

“[The murals] transformed the community by not only bringing in this beautiful painting, but it transformed the residents’ experience of the community and how it made them slow down and look more carefully,” she says. “It was as much about community as any of my other work has been, which I did not realize before I started. But it was definitely the most important part.”