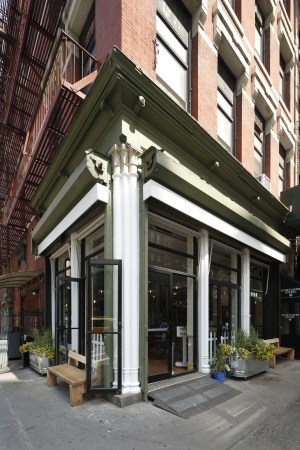 “The whole point is that we are delivering a product that we think New York wants,” says Cory Lee, operating partner of the latest Australian-helmed café to enter the city’s dining scene, Coco & Cru, which opens Wednesday. Together with Perry Rahbar, Adam Elzer and Shane Covey from REC Hospitality, he’s bringing to life a long-envisioned dream of the quintessential Old-meets-New World Australian café, one that prioritizes simplicity and health. “The whole idea is you can come in five days a week, eat here five days a week, and feel good about yourself.”

Coco & Cru, perched primly on the corner of Broadway and Bleecker Street in Manhattan’s NoHo neighborhood, is the seventh project from Lee and Elzer, riding off the successes of Upstate Craft Beer and Oyster Bar, Edwin & Neal’s Fish Bar and Sauce. The duo have partnered since 2010, and the Coco & Cru concept was always an aspiration for Lee. “He’s been talking about this as long as I’ve known him,” Elzer says.

Lee, a native of Sydney, came to New York nine years ago after working for SoHo House in London for five years. “I got my first job when I was 13 in a mom-and-pop café, to get a taste of it,” he says. After building his way through a variety of restaurant and bar work, he realized he wasn’t interested in separating the two. “Bars are fun, but then I kind of fell in love with the whole restaurant vibe, and where I find myself now is that I could not do a restaurant without a bar scene, and I could not do a bar without a restaurant scene,” he says.

Coco & Cru, then, is dedicated to both. The menu is “all based on freshness and being healthy-minded,” Lee explains. They’ll use only consciously sourced, hormone-free, grass-fed meats and will fresh-squeeze all juices. The selection of bowls, salads, sandwiches, muesli, granola and breakfast pastries combines the food Lee grew up knowing with the modern café scene happening in Australia at the moment. “There are menu items on there that are classically Australian dishes that I grew up with, what the mom-and-pop store back home has, and has always had,” he says. “[And then there is] our bowl section, which is more grain-focused, is where you’d see the Sydney café [influence]. We have this mix-and-match of what I grew up with, this kind of old school Australian food, and what’s happening in the cafés back home right now.”

New Yorkers have taken to Australian-minded cooking in recent years, with the success of cafés like Two Hands and Bluestone Lane creating a basis for a spot like Coco & Cru. “The café culture in Sydney and Melbourne has grown so well that it really is about very talented chefs working in a casual environment, and it’s some really inspirational food, at a reasonable price,” Lee says.

Their tag line, “Made in the USA with Australian parts,” is based on Lee’s life story, he says. “My children were born here, so it’s kind of fitting to have my first concept open here in New York, where my kids were born,” he says of the café, which is named for his two children. “I never thought of doing it in New York, to be honest. But as New York people started to adopt this cuisine and style of service and this atmosphere, it was like ‘we have to do it now.’”

For alcoholic drinks, they’ll offer a mix of on tap, on draft and “on juice,” spiked fresh juices. “It’s that whole idea of fresh juice cocktails, but not in the gimmicky, sweet, tiki way you think of,” Lee says. This includes pairings like pineapple and whiskey, and Campari and orange juice, fresh-squeezed to order so “you’re finishing your drink with the juice machine.”

Think of it as the Aussie way to have your summer cocktail. “We like the interaction of healthy and naughty at the same time,” Lee says. “There are so many people who like to drink, so why not drink in the healthiest way you can?”