‘Virgil Was Here’ – a Poignant Show Pays Tribute to the Designer

Virgil Abloh: The Successes of a Multihyphenate

BEIJING — The High Line in Manhattan is touted as one of the most successful examples of urban revitalization in recent years, inspiring numerous copycats from Sydney’s The Goods Line, Rotterdam’s Hofbogen and Toronto’s Railpath. A similar, linear public project, Hong Kong’s Avenue of Stars, is ready to unveil its new look, although this time made by the same architects who started the craze.

Designed by James Corner’s Field Operations, the firm who dreamt up the High Line, the hope is that it will repeat the same kind of magic for Hong Kong and after undergoing four years of renovation, the waterfront promenade officially reopens today. The changes are part of a larger vicinity revitalization effort that includes the $2.6 billion Victoria Dockside project from New World Development, an ambitious mixed-use complex akin to the city’s Hudson Yards spearheaded by Adrian Cheng.

“There are clues from the High Line that informed our design; the sequential character of strolling along a line, with episodic sequences, places, discoveries and surprises along the way,” Corner told WWD ahead of a red-carpet opening party for the avenue tonight, adding: “They are similar in that they are linear elevated walks or promenades with amazing contexts, views and experiences. They are not parks or plazas or squares, but linear journeys.”

“I think that it is fair to say that, up until recently, most urban planning and development projects in Hong Kong and Asia tended to be solely about the buildings and the programs they support. Outdoor open space is often residual or treated minimally, with limited aspirations for well-designed public space.”

Since 1982, the promenade has been a spot for leisurely strolls and to enjoy the dramatic backdrop consisting of mountains, crowding skyscrapers and a busy harbor. In 2004, the government tried to pump new energy into the area, re-theming it as the Avenue of Stars, a take on Hollywood’s Walk of Fame. Stars such as Jackie Chan were invited to add their handprints to the footpath, while others like Bruce Lee had statues erected in their honor.

But the 457-meter-long pathway was ultimately uninspiring and languished far beneath its full potential. To begin with, in its initial period, there were only a few dozen handprints at the tourist attraction. Compare that to Hollywood, which keeps more than 2,600 stars.

The avenue suffered from four major complaints. It was often uncomfortably hot due to Hong Kong’s subtropical climate, as it offered little shade; it was crowded; it had very little in the way of amenities, and it was not very accessible — inconveniently cut off by a wide road from the main bustling shopping district of Tsim Sha Tsui, and with nothing more than two museums and a performing arts venue bordering Avenue of Stars on that side of the road, most people had infrequent reason to cross it. All of that meant the promenade became something people brought out-of-town visitors to see, rather than a feature of the city that locals enjoyed and fully utilized on a regular basis. 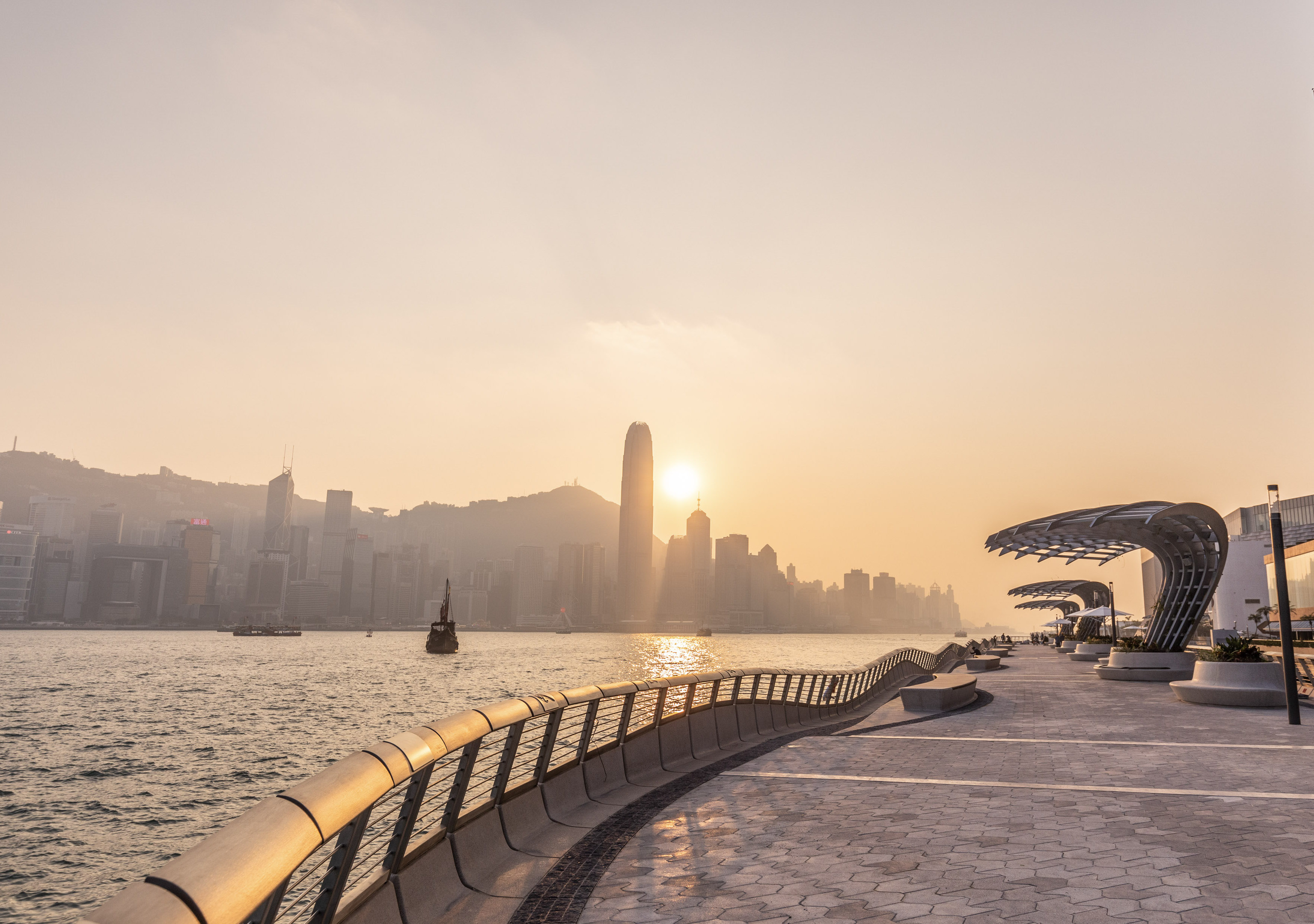 In 2015, repair works began, and the new version contains more than double the seating, shading which increased by 700 percent, greenery by 830 percent, alongside a raft of changes intended to make the stretch a more captivating part of the city.

“Shade is critical in Hong Kong, especially during the hot summer,” Corner said. “We planted shade trees and designed a number of shade trellises. Many people come out in the evening to enjoy the views, and so a balance has to be struck with spaces for shade alongside more open areas for views and gathering.”

While even more greenery would have been desired — compared to the High Line, this project doesn’t come close in terms of number of plants — Corner said the large number of crowds to accommodate had to be taken into account, and his firm had to work with structural barriers.

“We elected to make all of the vertical surfaces green to try to balance the amount of hard surfaces required,” he said, also pointing to the avenue being a structural slab, therefore limiting “soil depth and loading, [and] limiting tree planting.”

“Nonetheless, the large elliptical lawn, the large tree bosques, the planting beds, the vertical green walls and the vine-covered trellises do offer significant greenery and a calming sense of natural serenity,” he said.

Other changes include taking down foreboding metal fences around the various statues honoring Hong Kong celebrity icon figures like Bruce Lee and singer Anita Mui. The barriers were put up to keep overeager selfie takers from climbing over the statues but were done without much thought to how it looked. In its place now, water elements do the same job, keeping people at appropriate bay, but without sacrificing aesthetics.

The celebrity handprints have also gotten a raised profile. Instead of on the ground, the handprints are placed onto the side railings of the avenue, increasing visibility and come with an added side of technology. New QR codes next to each statue allow visitors to access detailed biographies of each artist and watch key clips from their movies. There are also new handprint inductees — 112 as of its reopening but increasing to 117 by the year-end.

“To see diverse people from all around the world, of all income brackets, cultures, ethnicities and abilities, will mark just how inviting, welcoming and accommodating the spaces are,” Corner said. “Hopefully, people will visit not just once but multiple times, so the numbers of return visitors will be important to know. It is not just quantities but also the quality of visitor experience and delight.”

The new and improved Avenue of Stars will be put to the test, almost immediately. Chinese New Year begins on Feb. 5 this year, and Hong Kong welcomes the new lunar calendar with a long, annual fireworks show. Thousands of revelers will descend on the avenue, a prime viewing spot, that night.

On an ongoing basis, the plan is to host a wide variety of events on the site. Details were not forthcoming but WWD was assured that world-class fashion runway shows, other kinds of fashion events as well as art programs and film premieres were some of what was in mind.

As for Victoria Dockside itself, which sits just adjacent, its office tower opened last year but the public is still awaiting three other phases. The Rosewood hotel is set to open its doors on March 17, while luxury apartment residence K11 Artus will debut in the summer. Lastly, K11 Musea, the flagship shopping development of Adrian Cheng’s hybrid museum-meets-mall concept, opens in the third quarter.