Opening two months after the designer's death, the show marks the transformation of his headquarters into a foundation. 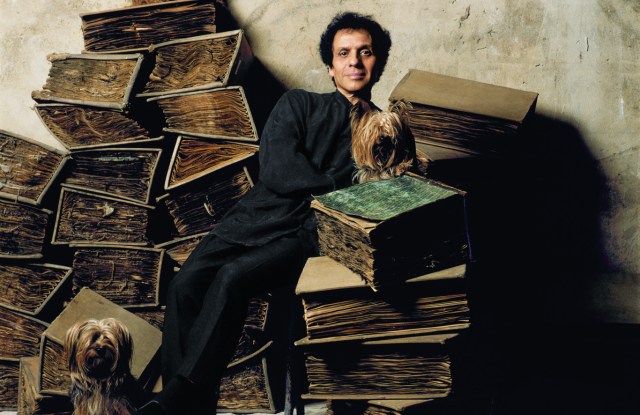 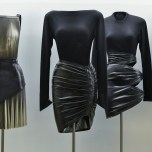 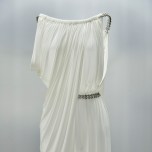 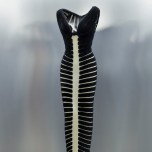 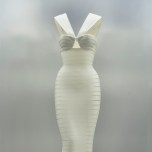 PARIS — It’s 10 a.m. in the kitchen of Azzedine Alaïa’s headquarters in Paris, and a couple of chefs are already busy frying vegetables for the staff’s lunch.

Three dogs, including a massive Saint Bernard called Didine, lie on the floor next to the dining table where painter Christoph von Weyhe, Alaïa’s lifelong partner, and Carla Sozzani, his constant sidekick, are sitting to discuss the show due to open in the building’s exhibition space the following day.

There’s a feeling that Alaïa himself might appear at any time, which only accentuates his absence. His death in November is so fresh that the place may have lost its raison d’être, but its soul remains intact.

“We are a family. Actually, in a way, we all became more close to each other now, because everybody wants to bring on Azzedine’s legacy,” said Sozzani, clear-eyed and smiling despite what must be an excruciating task.

“Nothing will change because that’s the way Azzedine wanted. Azzedine always wanted his people to be around him,” added the Italian retailer, who founded the concept store 10 Corso Como.

In 2007, she and the two men created the Azzedine Alaïa Association with the aim of building bridges between fashion, architecture, art and photography. As it prepares to transition into a foundation dedicated to preserving his oeuvre, the institution is hosting a retrospective to coincide with Paris Couture Week.

“Azzedine Alaïa: Je suis couturier” is scheduled to run from Jan. 22 to June 10 at 18 Rue de la Verrerie, the gallery adjoining the designer’s studio and historic boutique, where his face gazes out from two giant portraits by Julian Schnabel in the oversize fitting room.

Curated by Olivier Saillard, the show features more than 40 pieces dating from 1981 to the present. It opens with the long black dress with pointy shoulders and silver stud stripes that Naomi Campbell wore to close Alaïa’s final show in July, which marked his return to the couture calendar after a six-year absence.

Saillard said he chose iconic creations, such as a white stretch rayon strip dress from his spring 1990 collection and a Grecian-style minidress from the following year.

“I decided to focus mainly on black and white dresses in order to share the timeless quality of Azzedine’s oeuvre,” said the former director of the fashion museum at the Palais Galliera in Paris. “I tried to create a mix that would emphasize Azzedine’s sculptural dimension.”

Each dress is displayed against an aluminum half shell that bathes the creations in a halo of soft light. “It’s like a pearl necklace, and each pearl contains a dress,” Saillard said. “There is no chronology, intentionally, because Azzedine always said that a piece could live for several seasons.”

Saillard, who oversaw a major retrospective of Alaïa’s work at the Palais Galliera in 2013, admitted he found it tough to work on the exhibition so soon after the designer’s death. The curator recently took over as artistic, image and culture director of shoemaker J.M. Weston.

“It was unsettling to do an exhibition on Azzedine now,” he said. “His body of work is without comparison, so I feel like it’s my mission to work on his behalf. On top of that, for a curator, Azzedine’s work is among the most beautiful. The dresses are so pristine, it’s as if they came straight out of the atelier.”

The foundation hopes to organize three exhibitions a year featuring Alaïa’s work and his extensive collection of fashion, furniture and photography. He not only hoarded his own designs, but also owned thousands of creations by designers he loved, such as Madeleine Vionnet and Hollywood costume designer Adrian.

“We’re talking about a museum-worthy collection,” Saillard said. “He was the only person in France to own designs by Claire McCardell, for example, and very few other collections in the country contain pieces by Charles James.”

In a bid to create a full inventory, Sozzani plans to move the Alaïa archive — currently crammed into the building — to a larger stockage space in the nearby neighborhood of République.

“Azzedine’s dream was to have a foundation open to the public where the young people could come and learn. He wanted to give everything he had to show to people,” she said, adding that the foundation will produce movies and books, offer scholarships for young talent and organize lectures.

She hopes to eventually open Alaïa’s atelier to the public. “It’s exactly the way he left it. We covered everything and closed the door,” she said. “We left the last dress he touched, everything. Right now, it’s very difficult to go up there.”

The work has already started in Sidi Bou Said in his native Tunisia, where Alaïa was laid to rest in a ceremony attended by Campbell and Tunisian President Beji Caid Essebsi. The designer’s house in the famed blue-and-white town opened to the public on Dec. 29 with an exhibition of von Weyhe’s paintings.

“We flew everybody to be there for the opening, which was a beautiful moment. I mean in the sadness, it made a unity in the maison. There were 90 people. The whole maison came,” Sozzani said.

At the opening of the Paris exhibition on Sunday, Campbell was joined by celebrities and industry figures including Peter Marino, Charlotte Rampling, Courtney Love, Kenzo Takada and Diego Della Valle.

An Alaïa retrospective is slated to open at London’s Design Museum in May. Compagnie Financière Richemont, which owns the brand, simultaneously plans to open its first London flagship this spring. Another boutique is scheduled to bow in Dubai in March, and a Miami location is also under discussion, Sozzani said.

The label said last month it would continue to create new collections. Sozzani indicated no official successor would be named. “No star designer — nobody can be Alaïa,” she stated firmly. Instead, the studio team, which moved into a new location after the designer’s death, will continue to work from his archives.

“It was not a seasonal collection and he was not following trends — he was making them — so there are so many treasures in this house for generations to come to work from Azzedine’s work,” Sozzani explained.

“It’s timeless and there is such a strong image, a strong silhouette — you immediately say, ‘This is Alaïa.’ You don’t need to change that. Nobody should touch that. It’s untouchable,” she concluded.