Baghdad at the Venice Biennale

Rising art star Ahmed Alsoudani from Iraq, a favorite of François Pinault's, will show in three separate exhibitions at the art fair. 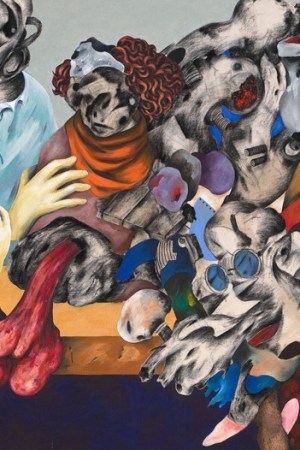 When the 54th Venice Biennale officially opens on Saturday, Ahmed Alsoudani will have his commanding, oversize canvases in no fewer than three separate installations: A pan-Arab exhibit called “The Future of Promise”; a show at the François Pinault Foundation’s Palazzo Grassi, titled “The World Belongs to You,” and at the Iraq Pavilion in a group show titled “Acqua Ferita/Wounded Water,” which features six artists from that strife-ridden nation.

The latter show marks the first time in 35 years that Iraq will have a presence at the Biennale. Alsoudani’s participation has particular significance as he was forced to flee the country in 1995, a year after high school, for defacing an image of Saddam Hussein.

“I haven’t been back since then, so it’s a great way to go back — not physically, but through my art,” says Alsoudani, 36, in his airy studio in far West Chelsea in New York recently. A series of uncompleted paintings bound for Venice were taped to the walls, featuring boldly colored, chaotic images of disfigured physiognomies, intestines, wombs and mechanical objects of the industrial age. The pictures testify to the scars and terrors of war and conflict, but far from grotesque, the paintings — in combinations of oils, acrylic, charcoal and gesso — have a manic beauty to them, in their vivid colors and organic abstraction.

Alsoudani’s journey from teenage political exile to the rarefied reaches of the contemporary art world has all the makings of a modern-day Bildungsroman. He escaped from Baghdad to Damascus, where he lived for four years working odd jobs. There he applied to art school, but was rejected. “They did me a huge favor,” remembers Alsoudani, who in 1999 won political asylum from the U.S. and moved to Washington, D.C., where he worked as a dishwasher while learning English.

After being told by a teacher that he should go to school in New England, “because they speak better English there,” Alsoudani ended up at the Maine College of Art in Portland, where his talent won him admission to Yale for his graduate M.F.A. work.

While still at Yale, Alsoudani staged his first solo show at the Thierry Goldberg gallery in New York, selling out seven paintings. By his second year, British megacollector Charles Saatchi had acquired one of his works. But it was François Pinault — founder of PPR, which controls Gucci Group, and one of the world’s most influential art world figures — who would become Alsoudani’s biggest supporter, following a 2009 visit to the Goff + Rosenthal Gallery in New York. “Pinault has eight of my works now. I have to show him everything first,” says Alsoudani. “But he really cares and supports the work. I feel safe with the works with him and it’s in good hands.”

Prices for Alsoudani’s output have exploded in the past year. Earlier this year, a work sold for $463,600 at Sotheby’s in London and another piece sold for $349,000 at Christie’s. As recently as 2010, an Alsoudani could be had for $70,000 and in 2008, for $30,000. Robert Goff continues to represent Alsoudani, following the folding of his gallery into London-based Haunch of Venison, which will stage a major show of the artist’s work there in October.

“The prices have appreciated so quickly because of the unique aesthetic quality of his paintings and the caliber of collectors who have developed a taste for his work,” says Lara Björk, a director at Art Capital Group, a New York-based banking and advisory firm serving collectors. “His paintings leave the viewer with something to chew on.”

That grist for thought can be politically charged. One painting on view in Venice — all of Alsoudani’s works are untitled — depicts a grotesque version of King Abdullah of Saudi Arabia during his visit to the U.S. last year for medical tests. In the work, a gasoline nozzle entombs a fetus and organs billow from King Abdullah, who is attached to an IV.

Despite the heavy source material, Alsoudani’s work also has some lighter, perhaps surprising, inspirations — fashion magazines. “For me as an artist, I’m fascinated by the way fashion magazines handle space and color. Even though my subject matter may be dark, I use a bright palette,” explains Alsoudani. “I’m hardly the first in this regard — 14th-century painters used beautiful purples and pinks and greens for very serious religious scenes.”

Alsoudani is a particular fan of Vogue’s Grace Coddington and he enjoys shopping for Gucci and Bottega Veneta, among his favorite labels. Conveniently, both brands are owned by Pinault. “I wish he would give me a discount,” says Alsoudani with a grin. “Fifty percent would be good. I’m going to ask him next time I see him.”