The Westminster Kennel Club Dog Show shares the spotlight with New York Fashion Week, and perhaps a few other things. 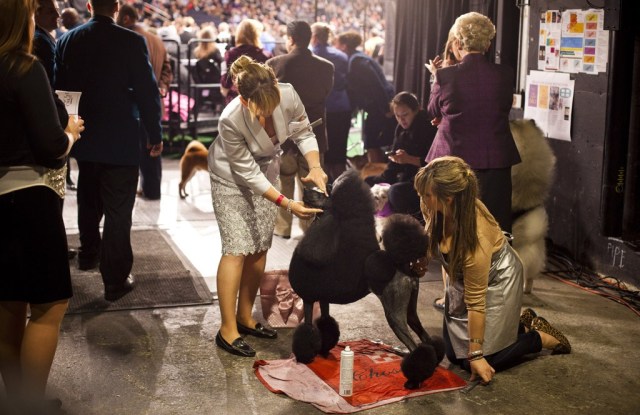 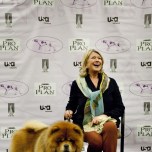 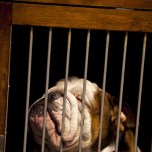 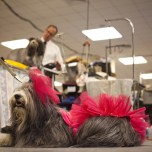 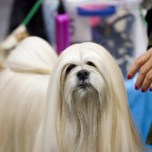 NEW YORK — Backstage, moments before the bright lights illuminated the stage, all sounds blend into a whirling, frantic hum. Harried voices are muffled by rolling luggage, blow-dryers and scissor snips evaporate into last-minute spritzes of hair spray. The night’s stars are primped for the biggest show of their young lives and their anticipation seems palpable. Their eyes dart back and forth and they lick their lips nervously. Their tails wag.

The scene at the 136th annual Westminster Kennel Club Dog Show at Madison Square Garden Monday night was probably not that different from a similar one across town at Marc Jacobs’ dazzling runway show at the Lexington Avenue Armory.

Although the front row boasted only one celebrity — Martha Stewart, whose dog was in the show — as opposed to the scores of hot young things at the Armory, to most outside fashion circles, the Westminster dog show was the bigger event in town.

And while the show, which will crown its Best in Show winner tonight, may not have drawn Anna Wintour, Dakota Fanning or Michael Pitt, it did showcase the likes of Tina Fey, Giorgio Armani, Ava Gardner and Kate “Winsit.” Those were pooches with celebrity-inspired monikers that competed Monday night. Clearly, these were no mere Fidos: A handler said it costs $22,000 a year to prepare a dog for the show.

They were all outshone by a bigger star, though, whose fame eclipses that of even the real Giorgio, Karl or Ralph, at least in the canine world: Palacegarden Malachy, a little Pekingese that is a six-to-one favorite to take the big prize tonight. He was kept literally roped off from the riffraff of the show, a well-coifed mass of fluff who spent his time sitting lazily on a lime green towel backstage while his handlers fussed over his every want and need, including which hair products would work best on his flowing ashen locks. Like any champion, Palacegarden Malachy has a certain arrogant air: He seemed to know he would take home the toy group title and go on to compete for the whole shebang — and he was right.

While Palacegarden Malachy might end up being top dog, in terms of hair care the champ was outdone by two others: Hallmark Jolei Austin Powers, a Shih Tzu who modeled a terribly fashionable top knot, and James Bond, a Lhasa Apso with a pin-straight blonde mane that was parted down the middle. (Clearly those who compete in dog shows spend a lot of time watching popcorn movies.)

Dog owners don’t have to worry only about their pets’ looks, though — they have to consider their own as well.  “You have to consider what you’re wearing as a backdrop for your dog, too, so that your dog shows off to its best advantage,” said James Bond’s handler, Susan Giles.

Anyone will tell you that it’s a big no-no to wear black when showing a black dog. It’s better to wear clothes that contrast with the pooch’s coat or highlight its markings.

Clad in a floor-length black skirt and matching blazer with a white window check pattern, the flaxen-haired Giles knew her stuff. Covered in dog hair, that jacket would later be swapped for her show outfit, a black blazer and a shiny emerald green top, which complemented her pup to a tee (or a paw).

But Giles, who said her designer label of choice for showing is St. John, was definitely in the minority. The group at the Garden really needed stylist triage. With their ill-fitting, color-blocked pantsuits and dowdy clodhoppers, most handlers walked a fine line between Republican National Convention attendee and cheesy prom date. And much of the audience seemed to take cues from them.

The crowd looked as if it was frozen in time — a time one never wants to revisit. Puffer vests, trucker hats, bulky hooded sweatshirts, mom jeans and chunky sneakers bought from department stores carrying only the worst looks of the Eighties seemed to be the uniform of choice. Nary a Manolo, Louboutin or Gucci loafer was in sight. OK, it is a dog show and who wants dog hair all over their expensive designer clothes, but do the fashions really have to go to the dogs, too?

“My daughter does not like short skirts. She doesn’t like pants,” said the mother of Tracy Tuff, the handler of Shetland Sheepdog Ava Gardner.

St. John it was not, but what Tuff lacked in style, she made up for in attitude. To devotees, that outweighs by far any thought of fashion.

“To me, you either can handle or you can’t,” Tuff’s mother said, bragging that her daughter can strut with any dog, regardless of size. “When she was 11 years old, she put best in show on a Saint Bernard. She’s 30 now.”

Fierce walk? Save for the farmlike aroma of the place (although it may have been better than cigarette smoke), something seemed oddly familiar around the Garden.

As a pair of Pugs cordoned off near Ava Gardner sipped on upturned bottles of Fiji Water while passersby snapped photos on their iPhones, there was only one question left unanswered: Are there dog show after parties?

“Oh yeah, there are a lot of kick-ass after parties,” Sue Rayner, a German Shepherd breeder, said. “We’re all kind of like gypsies. We come from all over the country. It’s the only way we can all get together.”
A fashion industry source found that comment illuminating and had a more pointed and cynical take on the topic.

“There is little difference between the pageantry of fashion week and the Westminster Dog Show,” the source said. “Both are replete with creatures prancing around in fur. Perhaps the only difference is that at Westminster, the fur doesn’t come off at night.”