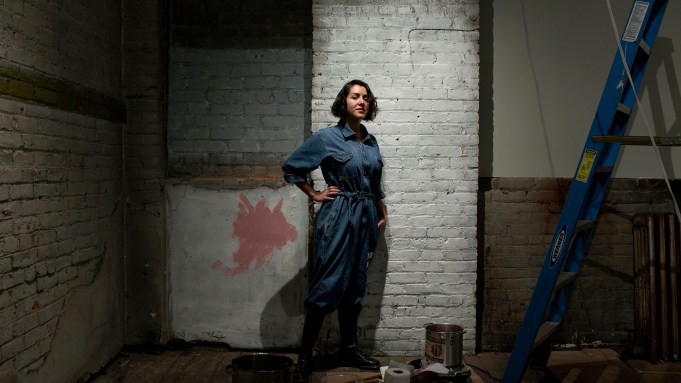 Such is the case for Ballon Rouge, an international female-led gallery collective helmed by curators in a mix of cities: Istanbul, Brussels, London, Sao Paulo, Paris and New York. The concept was founded by Helene Dumenil in 2017, and is now making its way to East Harlem for its first New York show.

New York curator Kathy Battista, who is also faculty and founding program director of the MA program in contemporary art at Sotheby’s, selected Los Angeles-based artist Carmen Argote, who in November took up residency in the raw ground-floor space of a walkup building on East 104th Street. Her show, “Warm is a Black,” opens Nov. 27 and will feature new works made in conversation with the neighborhood and building.

The artist worked with an unusual material for the works: avocado. She’d recently begun her exploration with avocado in Bogota, Colombia, and wanted to push her practice farther.

“Trying to process natural materials in different ways, trying to consume materials that are for export. For example, in Colombia, the avocado is grown for export to the U.S., and I was like, is there a way to kind of process it differently? It began as a way for me to understand the landscape in a different way,” says Argote. “And so this show is taking those conversations farther, and also getting to know the neighborhood. It’s been a process of walking back and forth [from the subway station to the building], and getting to know where to buy the avocados, and getting to know East Harlem.” (Her preferred avocado vendor is a local bodega.)

The avocado is rendered in several ways; the pits and skins were used as a dye in a sculptural installation piece of wooden presses and silk, and she uses the avocado meat for the paintings, which reveal the gesture of the artist. Argote was inspired by a salt mine she visited in Bogota, where dynamite had left the space marked by striations. “In this installation I want to reference something about the way this felt, because it left this really particular imprint in my memory in terms of space and the body, death and life,” she says.

All of the paintings feature a color-blocked square, representative of the hypothetical vendor as well as the physical space from which Argote created each piece.

“They’re more about delineating space in relationship to the body. This avocado gets pushed with my fingers…and demarcates the space; it’s always like a pushing away, pulling towards. These are really about claiming space,” she says of the works, which were laid out across the space’s floor ahead of being installed on the walls. “It’s also about making the invisible visible. For example, a composition that’s horizontal, by flipping it vertical, then it becomes in conversation with painting, and then it’s able to be understood as a composition.”

In a way, it’s similar to the process of gentrification of neighborhoods in New York — the gesture of space has always been there.

“A lot of these communities become invisible where people are like, ‘Oh, there’s nothing there, and now there’s something there.’ There’s an invisibility there, too, which just needs a change in perspective.”