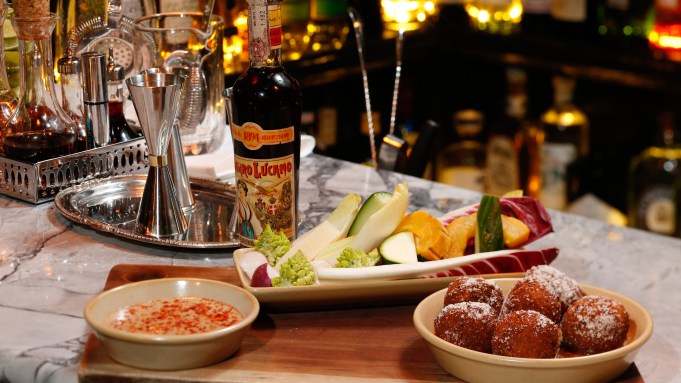 Fabio Raffaelli takes his craft seriously. It’s evident in his thoughtful comportment, the fitted suit he wears and the knowledgeable manner in which he speaks about cocktails — Italian cocktails, that is. After all, he’s from Milan.

Raffaelli is the head bartender at Bar Fortuna, an annex of Chef Casey Lane’s Casa Apicii that opens today above the restaurant in Greenwich Village. Raffaelli, previously of Del Posto and Restaurant Daniel, has worked for such noted international chefs as Alain Ducasse, Gordon Ramsay and Ferran Adrià. He cracks jokes while lounging on one of the bar’s dark velvet couches, but when he steps behind the counter, it’s all business.

Bar Fortuna’s interior is dark and dimly lit. The black walls are covered by shelves that house pictures, books, playing cards and other trinkets that give the space a homey, lived-in vibe. The fireplace helps in setting this tone, too, and will come in handy in the cold months ahead. It’s a cozy environment that seats about 22 people — and they don’t take reservations.

The bar’s drink menu focuses mainly on aperitivo-based cocktails and boasts one of New York’s largest grappa selections. There are classic cocktail offerings as well — Tom Collins, Sazerac and Mai Tai, for example.

“I’m from Italy,” Raffaelli says in a thick accent. “When you study bartending in Italy, these are the first things they’re gonna teach you.” He points to the drink menu’s first page, which is strictly Italian cocktails. “And then they’re gonna teach you this,” he continues, pointing to the second page. “If you see the Italian market right now, this, not many people order,” he says, referring to the classic cocktails. “The people in Italy only know these cocktails because they work with a lot of people abroad. But Italian people, they only drink [Italian cocktails].”

Raffaelli notes that his take on the Bellini is “very, very good.” “We add a little bit of peach bitters and Crème de Pêche de Vigne, which is a French liqueur,” he says. He notes that he keeps the presentation of the cocktails fairly simple. There’s no kitsch to his craft.

Food-wise, the menu includes six plates, all of which are small and meant to be shared. The idea, Chef Adam Nadel says, is that you eat enough to keep from getting drunk, but not too much — that’s what dinner’s for.