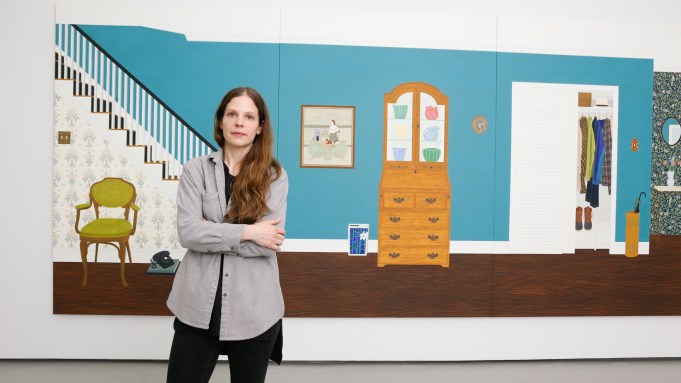 The paintings, which depict domestic spaces, build upon her work shown in 2015 at the Institute of Contemporary Art in Philadelphia. Those earlier paintings serve as a sort of archive for her grandparents’ now demolished house in Long Island; she created them as a way to preserve the memory of that physical space and specific objects that they owned.

“I started to step a little bit away from having to depict something that existed, to changing things to make decisions that were in service of the painting versus in service of the memory,” she explains of the direction for her newest work.

The large scale paintings on display at Jack Shainman depict realistic rooms of a house — not all necessarily from the same imagined house — which weave the personal with imagined details. Her paintings incorporate objects that serve as clues into her own history and act as entry points for viewers to consider their own memories. A copy of “Anna Karenina” rests on a bed stand in one  scene, which is her father’s favorite book; an Earl Cunningham painting hangs in a painted bookshelf, a nod to her past focus on landscapes; a book from her therapist’ bookcase is inserted into a living room scene. “There are always little clues for people who want to see them, that can fuel a narrative,” she adds of the personal details. “The idea of something being sentimental doesn’t make it any less valuable to me. I think of it as being sincere and meaningful as opposed to maybe a Hallmark card.”

The paintings are realistic enough so that viewers can imagine themselves in each depicted room, but the perspective and proportions are just slightly off with a flattened quality, representative of the process of recollection.

“You can wonder what it’s like to wander through [the rooms], and be more engaged in the spatial navigation and how that can sort of mimic how we navigate our own brains and memories,” she says. “Sometimes the distortions and flattening say more about what it means to forget something and invent something to fill the gaps than actually have a photograph.”

Her work also explores the idea of the domestic space in context of the current political climate.

“I was really thinking about the idea of the domestic space and the work space, and what that means to be a woman in America today and the world,” she says. “I listen to the news all day in my studio, I spent my whole year working on [the show]. The name of the show ‘Homemaker’ — I thought of it and I was like ‘OK, people will either think it’s just some dumb fluffy [name], or people will read it as a word that makes a lot of people, especially women, recoil,” she continues. “It’s an aggressive decision to call this show ‘Homemaker.’ I feel like the domestic is something that’s absolutely taken for granted so deeply, but it’s something that’s so necessary, and people depend on it so much.”

In the gallery’s side room, two paintings of embroideries hang on opposite walls; they depict two embroideries made by Suss’ female ancestors. “I was thinking about how these embroiders are really great ways to think about that very specific take on the domestic space — the domestic emblems that hang,” she explains.