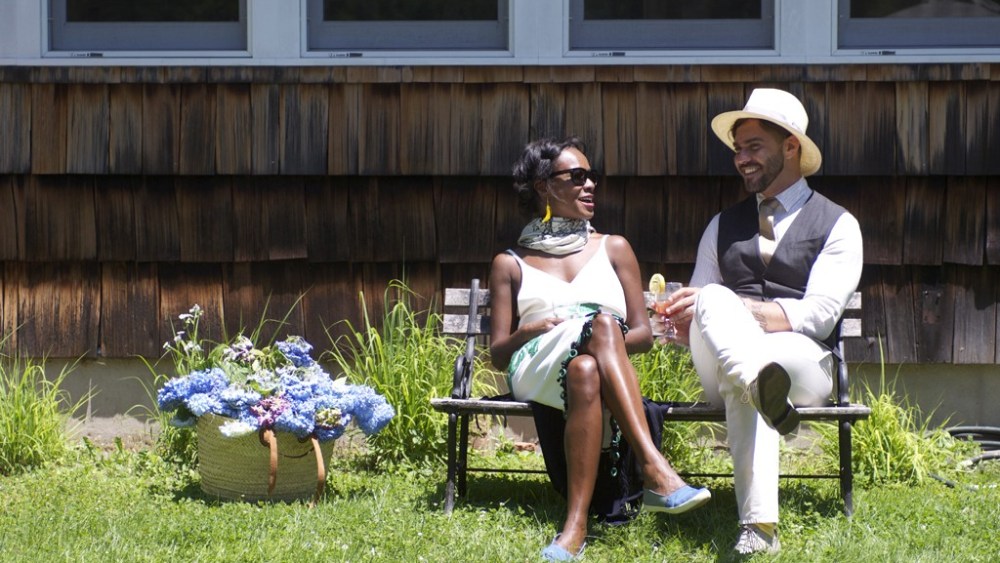 On a bright summer Saturday, a smartly dressed posse of fashion folk gathered in a flower-strewn backyard to celebrate the birthdays of publicist Lorenzo Martone and Brazilian model Jeisa Chiminazzo. André Leon Talley swept through the garden gates to greet guests like Marc Jacobs, Shala Monroque, Ana Beatriz Barros and Ruffian designers Brian Wolk and Claude Morais, who were all gussied up as instructed for the “Downton Abbey”-themed fete. Inside the low, shingled house, actress Isabella Rossellini held court at the kitchen table.

The scene was an unlikely sight in Bellport, a sleepy Long Island village that’s just 65 miles from Manhattan but temperamentally more akin to Mayberry than Gotham. The Hamptons it’s not, as many thankful residents will tell you. Ironically, though, it’s that idyllic, under-the-radar quality that’s drawn a certain circle of New York’s glamour industries — fashion, media, design and art — to the pint-sized coastal town.

“The conventional wisdom of fashion and publishing is that we need to be in the center of the action. But whatever industry you’re in and there’s a lot of pressure, there’s a desire to slow down sometimes,” says Ariel Foxman, managing editor of InStyle, who owns a home in Brookhaven that previously belonged to Costa and his partner John DeStefano, who races thoroughbreds.

Foxman was introduced to the town by T Magazine’s Bruce Pask, a longtime Bellport resident, and first rented a small cottage on Rossellini’s property.

“Needless to say, when you come to a community and Isabella Rossellini is your landlady, it’s quite fantastical,” says Foxman. “She would invite us to use her indoor pool and her ping-pong table and tell us where to buy meat.”

Rossellini herself was turned on to the area more than two decades ago by photographer Bruce Weber. Many credit Weber, who bought a house in Brookhaven in the Seventies, with making the town fashionable among the style set. Other former residents ticked off by Mark Petheram, the town’s go-to real estate broker, included Shirley Lord and the late Abe Rosenthal of The New York Times; photographer Steven Meisel, who used to bring Madonna to town in the Eighties, and Vogue’s Anna Wintour, who lived right next door to Weber but has since departed for a grander waterfront estate in neighboring Mastic Beach.

Jackie Kennedy spent a summer in Bellport, which is edged by the glistening Bellport Bay, in her younger days; actress Jennifer Connelly grew up with her family in town, and Mick and Annabelle Dexter-Jones brought the precocious Ronson children there in their teens. (“I could hear their music sometimes,” remembers David Meitus, Westwater’s husband.)

“You can take the train here and it’s very accessible. It’s a little community and it’s very beautiful and very small and we all know each other,” says Rossellini, who keeps pigs and chickens on her lush property. “Some of us, including me, live here year-round. For acting, I go to New York or fly to Paris. But I don’t like to live in New York. It’s too noisy.”

Rossellini raised Wiedemann, who has followed in her mother’s famous footsteps as a model, in large part in Bellport.

“I have many great memories out there, including learning to ride my bike and driving it straight into our pool and sinking to the bottom,” Wiedemann recalls. “And also having to chase our pet pig, Spanky, off the golf course when he escaped from our garden.”

Weber’s many photo shoots in Bellport were the subject of a retrospective at the Bellport-Brookhaven Historical Society this summer, which drew guests like interior designers Jay Johnson and Tom Cashin. Weber shot for Vogue, GQ, Interview, British Vogue, Vogue Hommes International in the town, as well as advertising campaigns for Ralph Lauren, Abercrombie & Fitch and Agnes B. He often boarded models in his house for shoots.

“I always loved how the light just bounced off the bay,” said Weber in an interview with the historical society. “The town also had a nice feeling of being tucked away from the world. It was a small community then as it still is today. Everyone knew each other, so you could knock on any door and just invite a neighbor over to be part of a photography sitting.”

Weber’s barn-style home — and the gazebos and tree houses he built, which sometimes show up in his photos — is now owned by Michel Botbol, senior vice president of women’s collection at Ralph Lauren, and his partner, Arthur Krystofiak. The couple renovated much of the house but kept an adjacent building used as Weber’s photo studio intact.

“The house hadn’t been occupied for some time and it hadn’t been cared for, but I thought it was magical,” says Botbol. “I had done a shoot there when I worked at W magazine.”

Costa and DeStefano’s previous and current homes in town have both both fashion and film history to their credits. Their old house once belonged to Eighties model Kim Alexis, while their newer home, which boasts a vast emerald lawn fit for polo, was the setting for several scenes from “Splendor in the Grass.”

“The famous scene at the end of the movie where Natalie Wood comes back to see Warren Beatty in the little farmhouse — those were buildings in the back of this house,” DeStefano says.

The photographer Eric Boman and artist Peter Schlesinger — the latter once boyfriend and muse to David Hockney — live in a house in nearby East Patchogue that was once the financier Bernard Baruch’s summer abode.

“They have one of my favorite homes. Impeccable taste, but a bit eccentric,” says DeStefano.

Art has a major presence in Bellport, with dealers abounding, like Westwater of Sperone Westwater, Danziger and Howard Read of Cheim & Read. Westwater hosts collectors for overnight stays and gives them tours of artist Malcom Morley’s studio in a deconsecrated church in Brookhaven.

Artists Hugo Guinness and Elliott Puckette bought their house in Brookhaven in 2008 from cosmetics maven Laura Mercier. Puckette uses a shed in the backyard as her painting studio.

“We have a little boat, we swim in the ocean and we go for walks,” sums up Guinness, who has a milder mien than his cousin, Daphne.

Much of Bellport life revolves around the bay, with many residents owning boats. There’s also a residents-only ferry that brings beachgoers to a very private and sparsely populated stretch of sand on the Fire Island National Seashore.

“Where can you go one hour from New York and be completely alone on a beach?” asks Mirzayantz, who is group president of fragrances at International Flavors & Fragrances. “It’s very close to New York but it’s a different world. Somehow it seems very remote in time. The authenticity and charm of the place were very important to us.”

Mirzayantz and Princess Alexandra of Greece spend time in Bellport year-round with their two sons. Gardening has become a favorite activity, something they knew nothing about prior to their move there last year.

“We have a lot of social engagements in New York and this is a very good counterbalance. You can completely regroup and disconnect in a very meaningful and wholesome way,” Mirzayantz says.

Lucy Danziger, editor in chief of Self magazine and a dedicated triathlete, can jump directly into the bay from her small backyard and swim to the town dock. “I pass from dock to dock. There’s Charlie’s dock, there’s Amanda’s dock,” she notes, referring to neighbors Charlie Rose and Amanda Burden.

“If you’re like me, very engaged and happy being in the red hot center of the universe all week long, you need to step away from that to relax and recharge,” says Danziger, who has been coming to Bellport since 1987. “When I spent time in the Hamptons, you feel like you have to go to whatever is going on that night. What’s zen about Bellport is that you can read a book or watch a movie and there isn’t any action that you’re missing out on.”

During his time as president of HBO Films, Colin and Elizabeth Callender split their year between the opposite cultural poles of Beverly Hills and Bellport. “There’s something about this town’s DNA that allows people to open up to each other. There’s a lack of pretense here — I think people who are drawn to the place aren’t looking for a status place for the weekend,” notes Elizabeth of the dichotomy. Nadine Johnson, whom she met in Bellport, is now godmother to her older daughter, Caroline.

Colin is now producing the upcoming NBC series “Dracula” and the Broadway play “Lucky Guy,” which was written by Nora Ephron before her death and based on the life of tabloid reporter Mike McAlary — himself a Bellport habitué before his death in 1998.

While the town has a tranquil, Arcadian quality, it also offers a definite social swirl and eddy on Saturday nights during the summer. (Fridays are usually spent at The Bellport restaurant, which Martone has dubbed “the Waverly Inn of Bellport” for all the recognizable faces that pop in.) Dinner parties are prevalent and during the summers there are any number of poolside cocktail parties. Both Calvin Klein’s Kevin Carrigan and Stacy Fischer, a photographer’s agent, gleefully accuse each other of being the party house in town.

“There are always fun people to hang out with. You don’t feel socially isolated here. It’s a round-robin of dinners at home,” says Foxman. “Alexandra Lebenthal is a hostess, for sure. Angela Westwater hosts some beautiful dinners. Michel and Arthur have really fun cocktail parties. John and Francisco have a lot of people over around their piano-shaped pool. And Bruce [Pask] is known for a chili and beer thing around his birthday in April. Everyone takes their turn.”

Lebenthal and her husband, Jay Diamond, plan to host an end-of-summer fete on Aug. 25 to break in their new waterfront home they finished building in the spring.

“In the city, I go to a ton of social events with photographers. On the weekends, I don’t want to have to wear makeup. There’s no scene here and a real friendliness about the place,” observes Lebenthal of the inclusive nature of Bellport socializing. “I always say I feel like I’ve walked into Brigadoon.”