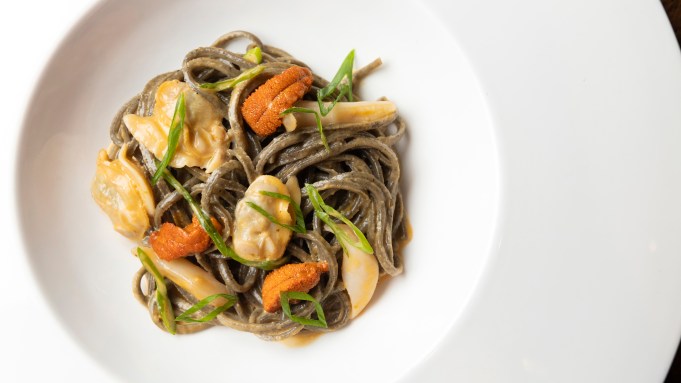 This week, chef Jonathan Benno is opening Benno, his third concept within the newly remodeled Evelyn hotel on 27th Street in New York’s NoMad neighborhood. The fine-dining Mediterranean restaurant taps into the chef’s roots, marrying his experience cooking in the kitchens of Per Se and Lincoln Ristorante further uptown, as well as in the South of France.

“I knew I wanted to do my own restaurant, and when I saw this space it was a lot more than [just that]…with the retail space on 27th Street, lobby lounge, casual restaurant,” says Benno, describing the various venues of the hotel; he runs all three of the F&B concepts. Despite the space for Benno being in general disarray when he first connected with the hotel’s partners about the project, he was won over by the charm of the landmarked building’s history. And as they began peeling back the layers, many original design details emerged — a domed skylight in the main dining room, original tiled floors and millwork. “We discovered all these things, but we didn’t know these things when we negotiated and signed the lease and got these things funded,” he added.

His newest restaurant is located in a space that actually straddles The Evelyn and The Latham hotel, which is located on 28th Street and is currently undergoing renovation under the Triumph Hotels umbrella. He enlisted Parts and Labor Design, which took an approach informed by Art Deco, to help solve the puzzle of syncing each of the distinct hotel spaces, while developing separate personalities for each. To enter Benno, guests walk through the Evelyn’s hotel lobby, passing by the bakery and through his more casual Roman-inspired eatery and bar Leonelli Taberna. Walking through a set of doors and up a short hallway, guests finally emerge into Benno’s impressive jewelry-box space, outfitted in rich gem tones, brass lighting fixtures and warm wood tones.

“When you get back here it’s kind of like, ‘Wow. We’ve arrived. This is really special,'” says Benno. He also thinks the delayed gratification of getting into the space will work in their favor; New Yorkers may not like to wait, but they do love an unexpected discovery.

As for the cuisine, Benno has crafted a tasting menu that is offered in three, four or five courses, depending on the desired length of experience of each guest. Courses incorporate references from the Mediterranean rim, including the South of France, Northern Italy, North Africa and Spain. Dishes for two include a brodetto seafood stew with all local seafood, and a veal T-bone with sweetbreads.

Despite its fine-dining classification, Benno aims to be accessible while offering diners value; to be refined and elegant, but still fun. The three-course menu starts at $95, which the chef notes is a competitive starting price point for the neighborhood.

“It’s New York; there will always be Per Se and Eleven Madison, but we want to drive business. And to fill a dining room on a Tuesday night in a tasting menu-only restaurant is very, very challenging,” says Benno, adding that various “surprises” are built into each menu option to elevate the experience.

Another challenge facing the restaurant is location. Although hospitality development in NoMad and Flatiron has been flourishing and the area has become a New York dining destination, Benno is located in the middle of a side street set slightly away from the main fray. That said, it is also surrounded by office buildings — “insurance row” is right around the corner — and high-end residential. Three mega hotels are being built on Broadway, and several other high-profile restaurant openings are on the way nearby from restaurateurs including Andrew Carmellini and Daniel Boulud. But Benno is happy to be in the mix.

“I worked at Gramercy Tavern and Craft many years ago, and fell in love with this neighborhood 20 years ago when I moved here,” says the chef. “I worked on the Upper West Side for 15 years — it feels really good to be downtown again.”