New restaurants to check out during Fashion Week. 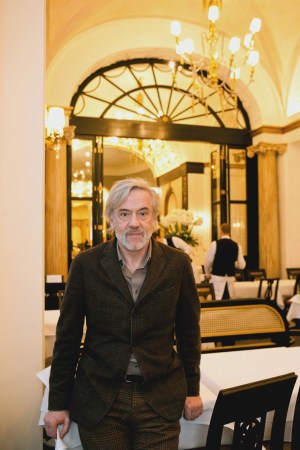 According to metropolitan statistics, 98 restaurants opened in Berlin in 2012. This isn’t only a testament to the fast-changing pace of the city, but the fact that more and more people are taking notice of culinary excellence here. And while discerning foodies are a relatively new breed in Berlin, their demands are now keeping the capital on its toes.

Today, the link between historic structures and gastronomic planning is evident, making Berlin a place where a great location and excellent food go hand in hand. “I have lived here for 30 years and have seen a lot of restaurants open up and close down — like in any big city. But Berlin is very interesting and keeps getting better,” commented Roland Mary, owner of the Berlin institution Borchardt and the new Grosz restaurant.

“Berlin is a free-spirited city of innovation. It is a city that brings the old back to life and makes it cool again,” noted Jesko Klatt, owner of The Grand and Spindler & Klatt. “A lot is happening in Berlin,” added Ludwig Cramer-Klett, owner of Katz Orange. “It is a place where you are free to express yourself and you have a lot of opportunities here. This city has many little hidden jewels and finding this space — a magical location in Mitte — was a gift.”

Here are three new restaurants in historic locations that offer more than just what the palate can appreciate.

Grosz the Institution: Grosz looks to be another chapter in the success story of Berlin restaurant guru Roland Mary (of Borchardt, Café am Neuen See, Pan Asia and Fritz 101).

Named after George Grosz, the socially critical painter who caricaturized Twenties Berlin, the restaurant is located in Haus Cumberland, the recently renovated 1911 landmark, on Kurfürstendamm. With an interior also reminiscent of the Twenties, Grosz is a café, restaurant and bar complete with a courtyard. The long and spacious room is punctuated with high ceilings, a dark stained wood bar, elaborate stucco, columns, mirrors, marble floors, even a fountain, plus chairs from Paris and lamps from Spain.

“I wasn’t particularly looking for a space on the west side, but when the landlord offered it I knew this would be a fine place for people to meet friends and enjoy good food,” Mary remarked. A lot of work went into the interior, but “the room itself was already like this, such as the columns and the ceiling. We renovated the space and the rest we built in.”

Grosz is primarily a coffee house with its own patisserie, which is new for Mary, but not for Philippe Lemoine, the French chef with whom he’s worked for many years.

“We bake fresh croissants twice a day, and all our pastries are made here,” Mary said. His favorite café offering is the club sandwich, while in the restaurant it is the braised lamb. He added that the French-German restaurant menu offers many dishes and variations of beef, pork, chicken, seafood, oysters and grilled lobster. His goal is to provide an ideal urban restaurant experience in the heart of the city.

The fusion of great German and French cuisine with carefully selected ingredients was important. “We use local products from farmers we know, and we sometimes prepare food made from organic ingredients. And sometimes better than organic,” he said.

Primal Cuts: Located in another landmark with historic charm, a former 1842 school house, The Grand is a collaboration between Martin Hötzl (Fleischerie) and Jesko Klatt (Spindler & Klatt), two hip club guys not new to the Berlin restaurant scene. Gourmet lovers and partygoers alike can look forward to an evening at The Grand restaurant, bar and nightclub that features a beautiful outdoor terrace in the summer.

Chef Tilo Roth’s extensive menu of sophisticated, French-influenced entrées is big on meat, with locally sourced Irish Hereford and Charolais beef. He touted the Irish dry-aged entrecote: “With our special [1,500-degree Fahrenheit] oven you can get that unique taste, and our porterhouse steak is also great.”

Fish and shellfish lovers also have a variety to choose from, including a selection of caviar from farmed sturgeon, or bouillabaisse for two, and there are also vegetarian and vegan dishes. The culinary inspiration came from California. Klatt, who lived and traveled through the U.S. for three years finds “the California kitchen is the healthiest: light, fresh and grilled, not greasy.”

As for The Grand, “you can eat here, then move over to the bar and you can stay around for dancing,” he noted. The decor is playful and was inspired by films and contemporary art such as the work of Jeff Koons.

“Obviously good food is essential, but an inspiring atmosphere is needed to make dining an overall experience,” he said. “This is not about theatric entertainment, but making going out to dinner special.”

Tapas of Stars: 5–Cinco is the first project in Berlin of Spain’s Michelin-starred chef Paco Pérez (Enoteca, Miramar). The restaurant delights all five senses and also symbolizes the five handcrafted Spanish flavors of Pérez’s culinary art with products, textures, aromas and tastes in a unique synthesis of sweet, spicy, sour, bitter and salty. His avant-garde Mediterranean menu builds a flavorful bridge between Spain and Germany with the oyster and caviar tartar for 45 euros or around $59 or the Iberian suckling pork 38 euros, or about $50. It features sea cucumbers, razor clams and oysters that he brings from the waters of Cape Creus in Spain, regional Berlin-Brandenburg specialties such as sweet water fish from Müritz Lake and Teltower turnips, plus seasonal tastes such as white asparagus or chanterelle mushrooms.

Meals prep can be observed through tinted glass under an overhead arrangement of copper pots and pans along with copper lamps by Tom Dixon.

“Diners are experiencing the meal and having a conversation about it because they are constantly being surprised with what they are eating,” said Pérez.

It’s located in the new luxury hotel Das Stue in the site of the former Royal Danish embassy in Berlin’s green Tiergarten. This Thirties Neoclassical building, famous for its curved facade, was designed by architect Johann Emil Schaudt, who also designed the KaDeWe department store.