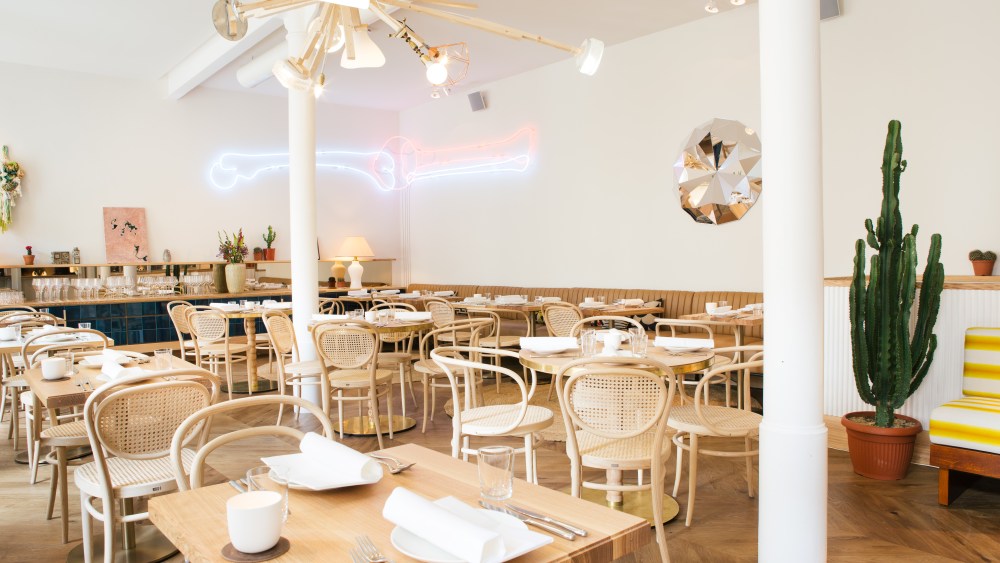 The Tree: Not far from Mercedes-Benz Fashion Week Berlin’s new location at the former Kaufhaus Jandorf department store, the space resembles more of a concept store or a minimal flower shop than a restaurant. Chinese architect Ma Ling and engineer Zhang Xiaoting serve savory cold starters, homemade noodles and raindrop cakes, comfort food from the Sichuan and Donbai provinces with a modern twist. But as the interior suggests, food is just the first step. The duo is thinking of expanding the restaurant to a design showroom with their own products.

Ryong: Responsible for some of the chicest Asian restaurants in town as well as the Oukan concept store, creative director Huy-Thong Tran-Mai has opened yet another creative eatery. The rustic-minimalist vegetarian fusion food bar focuses on fresh, all homemade interpretations of dishes like tempura-coated bao burgers, spelt Ramen noodle soups, cabbage wraps and a drinking menu of signature lemonades, tea cocktails and novelties such as sweet potato lattes.

Panama: “The Trip to Panama” is the title of a German children’s book about an imaginary voyage, and that imaginary voyage is the inspiration for the experimental cuisine restaurant in the heart of Berlin’s art district on Potsdamer Strasse. The third restaurant of Contemporary Food Lab founder Ludwig Cramer-Klett — after Katz Orange and Candy on Bone — Panama showcases psychedelic artwork in an ample space with classic Thonet furniture. The small unusual dishes — think deer tartar with shiitake mushrooms, baked banana with tarragon or a dessert of salad and chocolate — invite food sharing.

Coda: Parsley root ice cream topped with fermented black garlic sauce and pistachios, accompanied by an oatmeal stout and muscatel concoction — thus reads the menu of highly unusual, delicious creations at the city’s first dessert bar off the beaten fashion track in Neukölln. Cofounder and chef René Frank is a former patissier at three-star restaurant La Vie and alumnus of the prestigious Culinary Institute of America and Alain Ducasse Formation. He opened Coda to make “gourmet cuisine that is accessible, affordable and innovative,” at a surprisingly low price point.

Sawade: Founded in 1880, Berlin’s oldest chocolate confectionery is one of the few establishments to survive the city’s modern historic turmoil — two World Wars and the Wall, among others. Once a purveyor to the Prussian imperial court, Sawade sets out to restore its old glory with an elegant flagship at Hackescher Markt, offering beautifully wrapped, delicious pralines and truffles, still handmade in the historic factory in the northwest of the city.

Fundamental.Berlin: The sophisticated design objects of the Berlin design, furniture and architecture studio are already spread in establishments like the MoMA design store or the Vitra Museum store. Founders Stephen Molloy and Gunnar Rönsch have now opened their first flagship at their headquarters in Berlin Mitte, presenting the full range of design products and furniture, as well as a café with daily changing cooks-in-residence at lunchtime and homemade cakes as part of a continuously evolving design space.

Sir Savigny: The newest add-on to the city’s upper west, this renovated 19th-century mansion is the materialization of madman-cum-contemporary hipster. A project by Amsterdam-based EHPC group and the first Sir-Hotel outside of the Netherlands, Sir Savigny features a living room-like lobby with backyard, an in-house burger restaurant and 44 rooms and three suites with mid-century furnishings, realized by Amsterdam-based designer Saar Zafrir. Staff is dressed in style by Dutch denim brand Kings of Indigo.

Kindl Centre for Contemporary Art: For a sip of art, connoisseurs can now visit the former brewery-turned-art space. The typical early 20th-century industrial brick building was purchased by German-Swiss art collectors Burkhard Varnholt and Salome Grisard. It opened as a private art space last fall, showing temporary exhibitions and featuring lectures by contemporary artists set against old power engines and beer boilers. On display until February are the group exhibition “How Long Is Now” with artists such as Manfred Pernice and Philip Akkerman, and solo shows by Eberhard Havekost and David Claerbout. The enclosed café, naturally, serves the Berliner Kindl beer, that was once produced here, as well as new home-brew Rollenberg, made in the cellars of the art space.