Five of the German capital’s chicest denizens reveal a few secrets, starting with their preferred places to shop. 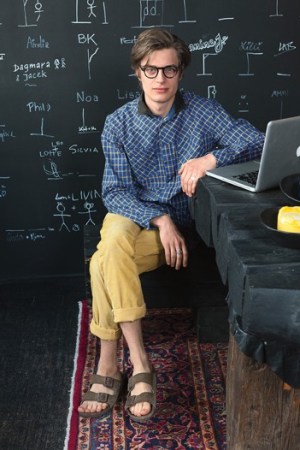 Five of the German capital’s chicest denizens reveal a few secrets, starting with their preferred places to shop.

Daniel Bixel — one of a new breed of hipsters who’ve flocked to Berlin in the past few years—used to be known as Mr. Fancy Pants. It began when he altered a pair of second-hand trousers to create a funky silhouette — big on top, tight at the bottom. The look caught on around the trendy Hackescher Markt and soon turned into a modest business. But fashion, like audio engineering, which he’d studied in school, wasn’t his professional calling. That struck him late one night, after a few drinks at a friend’s Christmas dinner, when an idea came to him out of nowhere. Two words: stuffed potatoes.

Mr. Fancy Pants is now Berlin’s Mr. Potato Head. Last year he opened Bixel’s, a shop that specializes in exquisitely stuffed spuds — baked potatoes whose insides are mashed with butter and cheese, plus various new filling combos. The ambrosial chicken potato, inspired by his girlfriend’s culinarily gifted Persian parents, is packed with chicken, honey, carrots, tomatoes, red lentils, red onions, pomegranates and walnut sauce. There is even a limited series of Stickxels Schnaps, which started as a joke but is now getting serious. But not too serious.

GO-TO SHOP: http://www.oki-ni.com. As a busy restaurateur, Bixel prefers to shop online, and his site of choice is Oki-ni, which was founded in the U.K. in 2001 as a store for progressive men’s fashion. The site offers a smartly edited array of designers and labels: Acne, Adidas Originals, Alexander McQueen, Band of Outsiders, Bernhard Willhelm, Billionaire Boys Club, Comme des Garçons, Jil Sander, Maison Martin Margiela, Nixon, Raf Simons, Rag & Bone, Rick Owens and Silent by Damir Doma, among many others. Oki-ni has also collaborated with brands such as Adidas, Levi’s and Paul Smith. Bixel’s last purchase was a pair of Timberland/Pendleton collaboration boots, but he especially enjoys shopping for socks: “They’re always funny and so easy. You don’t have to try them on.”

FAVORITE BOITE: Schnelle Quelle. “It’s a crappy sort of place,” says Bixel, summing up the allure of this classic East Berlin pub, notable for its cheap beer, no-frills decor, a piano perched on top of a door and a steady flow of music videos on the TV.

SECRET LONGING: Wheels. “I have to get a car,” says Bixel. But not just any car: a Jaguar Daimler Double Six from the Eighties, in dark green — “the only color for a Jaguar.”

Many people have difficulty remembering Jan-Henrik M. Scheper-Stuke’s full name, but the same can’t be said of his look. Which is a good thing, since he’s now both the face and the director of his uncle’s tie company, Edsor Kronen. When he stepped into this role right out of law school, with an eye toward forging a younger image for the brand, he knew the risks: “If things didn’t work out, I’d be known as the Krawatte Kaspar” — the Tie Fool — “forever.” Luckily it didn’t come to that. Under his stewardship, Edsor Kronen — which sells in Japan as well as Europe — opened a shop-in-shop in Berlin’s Galeries Lafayette in January, and is close to signing a lease for a flagship in trendy Hackesche Hof, where Scheper-Stuke himself will demonstrate the art of making ties by hand.

GO-TO SHOP: Chelsea Farmer’s Club. Although it’s furnished like an English club for taxidermy enthusiasts, CFC strives to take the stuffiness out of classic British style. With the exception of accessories (Hunter boots, Aspinal wallets, Edsor Kronen ties) and fragrances (Taylor of Old Bond Street), the store’s assortment is manufactured in limited quantities in England and Scotland.

SECRET LONGING: Sweets. “It doesn’t matter what kind: Gummi Bears, little Mars and Twix bars  — they’re all over the showroom.”

WHERE TO RELAX: Soho House. He comes here for a swim on summer mornings, then relaxes on the roof terrace. He also favors a friend’s restaurant, Pan Asia: “I always have my place there, and then Tina comes, then someone else. Before we know it, we’re a table of six.”

He’s one of the handsome bartenders people rave about when they describe King Size Bar, but don’t count on Leo Honegger to be there much longer. His modeling career looks to be taking off — his agency, Seeds, is sending him to Milan for the first time — and as much as he enjoys the nightlife, he says, “It’s not where I see myself in five years.”

Before he moved to Berlin, Honegger had an “amazing apprenticeship, a super apartment and a great girlfriend — but I got bored with everything. I had to search for a new challenge.” Even modeling has its limits: “It can be fun… but too many people lose their souls.” Although he remains excited about his budding career, he feels propelled to cross borders. Honegger just got back from India, where he injured his leg in a motorcycle crash. Yet faraway lands still beckon. “I don’t have that connection to Berlin actually, but I don’t say I’m Swiss either,” he says. “I just go my way.”

GO TO SHOP: Voo. This very “in” yet off- the-beaten-track shop is located on Oranienstrasse, in a former foundry, the walls and floors of which bear witness to its industrial past. The 3,250-square-foot space provides plenty of room for cool yet durable duds from the likes of Wood Wood, Henrik Vibskov, Pendleton, Stine Goya and Twins for Peace, not to mention the Surface to Air suede blouson that Honegger has set his heart on. Another must-have was a gift from his mom: Keune hair gel, which he swears is the “best I ever had.”

FAVORITE BOITE: King Size Bar. “It’s like in ‘Hotel California,’ you can check out anytime you like, but you can never leave.”

SECRET LONGING: “I don’t think about things like that, which is probably a sign that I have too much.”

WHERE TO RELAX: Up on the roof. “We just kicked out the door to our roof,” Honegger confesses. “To lie by yourself on the rooftop … it’s not allowed. But we do!”

Even though he finds Berlin’s new buildings “unambitious,” Carson Chan remains deeply involved with the city’s architecture — in particular, “how architecture behaves versus how it looks.”

After receiving a masters in design studies from Harvard, Chan worked for Berlin architects Barkow Leibinger, and then in the Neue Nationalgalerie’s architecture department. In 2006, he and fellow Harvard graduate Fotini Lazaridou-Hatzigoga opened Program e.V., a nonprofit devoted to architecture.

Since then, Chan has been named curator for the 4th Marrakech Biennale in 2012. He also contributes to Berlin’s culturally charged magazine 032c, which lets him delve into his other passion — fashion. “I got interested in clothes in high school. There was this bizarre Masaki Matsushima jacket — I really wanted it, and my parents said, ‘Get a job.’ So I did,” he recalls. “I spent all my summer job money on it. It was the beginning of the end.”

GO-TO SHOP: Darklands, Version 3.0. Owner Campbell McDougall won a loyal following at the now legendary Komakino store in his native Vancouver before he moved to Berlin three years ago. Like Komakino, which has had eight incarnations, Darklands is nomadic. The Heidestrasse store is Version 3.0, but the raw aesthetic remains constant, comple- menting an assortment of predominantly black attire and accessories by the likes of Carol Christian Poell, Rick Owens and Ann Demeulemeester. Chan’s favorites among the pieces he found at Darkland include a pair of edgy A1923 (Augusta) shoes.

SECRET LONGING: Another degree. Chan plans to enter a PhD program after the Biennale in Marrakech. “I’ll apply and then see,” he says. “Hopefully I can start next fall.”

WHERE TO RELAX: Again, Bar 3. “At one point I was there four times a week.”

Canadian-born Trevor Lee Larson serves as a prime example of the unfettered and unpressured way in which this city’s young individualists live.

“It’s great to have the free time and the space to have a music studio and also to paint,” he says. “But sometimes there’s so much time you can get monumentally depressed.” Fortunately, as an artist and a musician, he’s able to take on plenty of projects — such as a recent music festival at HBC that featured 20 artists in six hours — and also teaches rock guitar to kids.

His own solo electric guitar sound doesn’t reflect the capital’s prevalent electronic style, though he did go on the road with the techno band Circlesquare. Since then, he and Marcus Ekroth have assembled a new band called Starving, which he describes as a “mix of Italian film music, actual thrash, plus a touch of psychedelic.” What prompted the name? “We’re starved for something new.”

GO-TO SHOP: Pale Blue Eyes. Co-owned by Marcus Ekroth, Pale Blue Eyes opened five years ago on the burgeoning youth boulevard Kastanienallee. Although it specializes in Swedish brands, the tiny shop carries a varied assortment, including Cheap Monday, Velour, Mini Market, Dr. Denim, Lee, Resteröds and Julian Red. Larson — who made the store’s sheet metal display table, using a flame thrower to give it a blue sheen — notes that his Cheap Monday jeans came from this store. He calls them “the only legitimate purchase I’ve made this year.”

SECRET LONGING: “Good question,” he says. But apparently not one that deserves an answer.

WHERE TO RELAX: The spa at Bad Saarow. “You can hear the wind from the forest when you’re out in the pool,” Larson says. “Plus, I heard you can go tree climbing there. Which could be interesting: I’m terri- fied of heights.