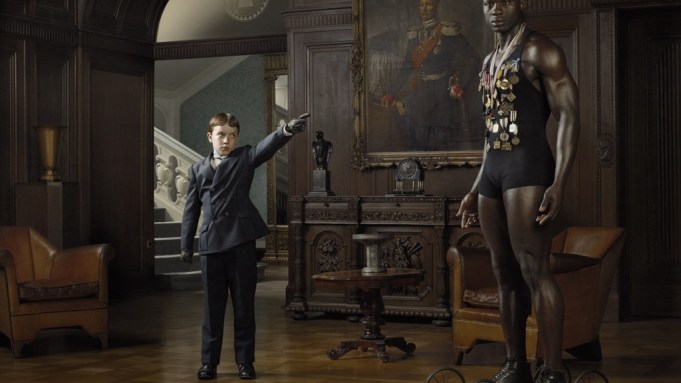 BERLIN — After shows in London’s Hamilton Gallery and Flatland Amsterdam, Berliners are finally getting a look at Dutch photographer Erwin Olaf’s series “Berlin.”

Although Olaf rarely leaves his Amsterdam studio to create his photographic fantasy worlds, concern that boomtown conditions were threatening another favorite fantasy spot prompted him to shoot on site in the German capital. And not just any site. Despite a lung ailment, his search sent him up 100 flights of stairs before seven places of personal, historic or aesthetic import were chosen, including the century-old ballroom Clärchen’s Ballhaus, a Freemason’s lodge, the Olympic Stadium, a public bath and the Schöneberg town hall where John F. Kennedy staked his Berliner claim.

An enthusiastic visitor to Berlin since the Eighties, Olaf says, “I’ve seen how the city has changed, but the world is changing. Berlin is becoming more and more the center of Europe, and as people going from A to B, we’re between two points.”

The 20 images in the series make overt references to painters of the Neue Sachlichkeit, or New Objectivity, movement — the likes of Otto Dix or George Grosz — while there’s an Old Masters’ gleam to the lighting. One also catches whiffs of Robert Mapplethorpe, who influenced Olaf’s earliest work, whereas the children who dominate many of the images look like they’ve come straight out of “Village of the Damned,” a Sixties flick Olaf says he hadn’t seen.

It was a 45-minute delay at Berlin’s Tegel airport, in fact, that prompted Olaf to weave eight-year-olds into this often-disquieting visual narrative. “There were a lot of northern European tourists waiting there with their kids, who were bored. I saw how much power the kids have — power that we give them. And I thought I could combine this with my time journey through the interbellum,” Olaf explains, referring to the interwar period.

Power, he adds, is somehow always a theme for him, and here we see “how completely useless old people are for kids. They’re clowns, circus performers, compared to this superpowerful little girl….I wanted children in the role of adults, to wonder what if the child takes over? — though it’s the part of the story I don’t tell.”

For Olaf, whose commercial work includes Diesel’s memorable 1998 Dirty Denim ad and who was tapped by Tomas Maier to shoot Bottega Veneta’s fall 2012 campaign, clothes have power, too.

“What interests me is how, if I put gloves on this little girl — or boy — it completely changes them. The outside makes the inside,” he says.

“Homage to Berlin” is being shown through Oct. 19 in the city’s Wagner + Partner gallery. In Paris, “Berlin” will be exhibited in Galerie Rabouan Moussion from Oct. 5 to Nov. 23.