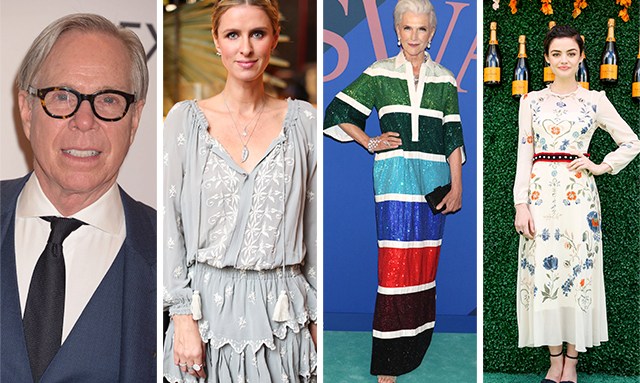 Father knows best. Ahead of Father’s Day on Sunday, designers and celebrities share the best lessons, wisdom and guidance given to them by their own dads.

Lucy Hale: “Life can be serious, but don’t take yourself too seriously and don’t overthink too much. He’s such a fun, lighthearted guy.”

Todd Snyder: “My dad, the one thing he told me is if you want to be the best, work for the best. And I took that to heart. I worked for Ralph Lauren, I worked for Mickey Drexler, and there’s no better people in the industry to be able to say you worked for.”

Tommy Hilfiger: “My father taught me to treat my mother and sisters with the utmost respect.”

Kerry Kennedy: “Daddy [Robert F. Kennedy] wasn’t one to sit us down and dispense wisdom. Mostly I learned from what he did rather than any demands. I remember sitting in our den after Martin Luther King, Jr. died in 1968, watching [as] Washington burned. Daddy stood up, the screen door slammed and he was out the door. Shortly later, there he was on the screen in the midst of the burning buildings, lending a hand. He taught, through action rather than words, that if there is a problem, one ought to try to fix it, no matter how daunting.”

Nicky Hilton-Rothschild: “He taught me to work your way up from the bottom, never feel you’re too above anything and learn the ropes. That’s what I did when I started interning and taking food orders and taking out the trash at 15.”

Nacho Figueras: “My dad has told me to always fight hard for things and that nothing is impossible, but you have to be persistent. He does it by example.”

Maye Musk: “To study to be a dietician because I wanted to do sciences. He told me to have a profession at the end, so I majored in dietetics.”

Dennis Basso: “Never be afraid of a hard day’s work. It’s OK to be the first one in and last one out; someone is watching.”