The Best Performances From the 2021 Grammy Awards

Harry Styles, Billie Eilish and Haim Kicked Off the Ceremony’s Live Performances
Harry Styles, wearing a Gucci leather suit sans shirt, but with a green feather boa, opened the show with his hit “Watermelon Sugar” (which later won Styles the Grammy for Best Pop Solo Performance). He was followed by Billie Eilish performing “Everything I Wanted” atop a car with brother Finneas on keyboard, and sister trio Haim (dressed in coordinating Prada looks) made their Grammy performance debut with “The Steps.” The three performers set the stage for what turned out to be a much more intimate ceremony than years past — instead of disappearing offstage after their respective performances, they sat and watched their peers. (And viewers reveled in watching Styles watching Eilish and Eilish watching Haim…etc).

DaBaby Performed Twice and Dua Lipa Showed Her Moves
Rapper DaBaby, nominated for Record of the Year and Best Rap Song, performed a rendition of “Rockstar” with a string intro and robed Gospel singers on backup. He was joined by Roddy Rich (who features on the recorded track) and Anthony Hamilton. After a Bad Bunny and Jhay Cortez interlude of “Dakiti,” DaBaby joined Dua Lipa for “Levitating.” Dua Lipa followed up with the dance-heavy “Don’t Start Now” (and shed a few layers of her sparkly purple Versace look in the process.) 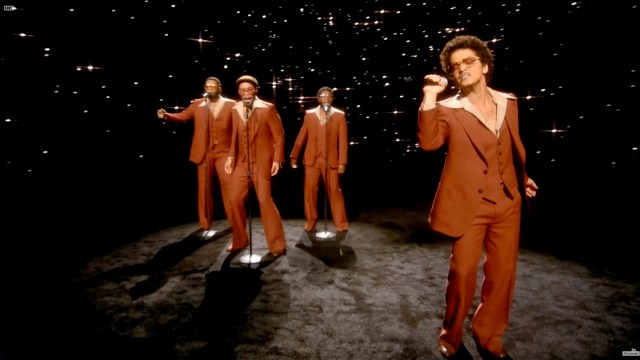 Country Music Makes a Strong Female-Centric Showing
A trio of female country stars took the stage. Mickey Guyton — the first Black female country singer nominated for a Grammy — performed her song “Black Like Me,” followed by Miranda Lambert with “Bluebird” (Lambert won Best Country Album for “Wildcard”). Rounding out the show’s country performances was Maren Morris, who was accompanied on “The Bones” by a special guest on guitar: none other than John Mayer. The collab represented a full-circle moment; the pair first met at the Grammys several years back.

Megan Thee Stallion and Cardi B Give the Crowd a Performance to Talk About
Megan Thee Stallion — Best New Artist and Best Rap Song winner — showed the crowd why everyone’s been talking about her. She performed her hit single “Savage” in 1920s-inspired showgirl fashion (and enlisted two tap-dancers!). Afterward, she made a quick costume change to join Cardi B on their hot girl summer anthem “WAP.” It was the first time the duo has performed the song live, anywhere, ever — and their over-the-top set included a giant heeled shoe and giant bed. Add in rapping and intricate choreography (and take out some of the lyrics, censored for the occasion) and the audience had reason to be wowed. Trevor Noah, for one, sure was. 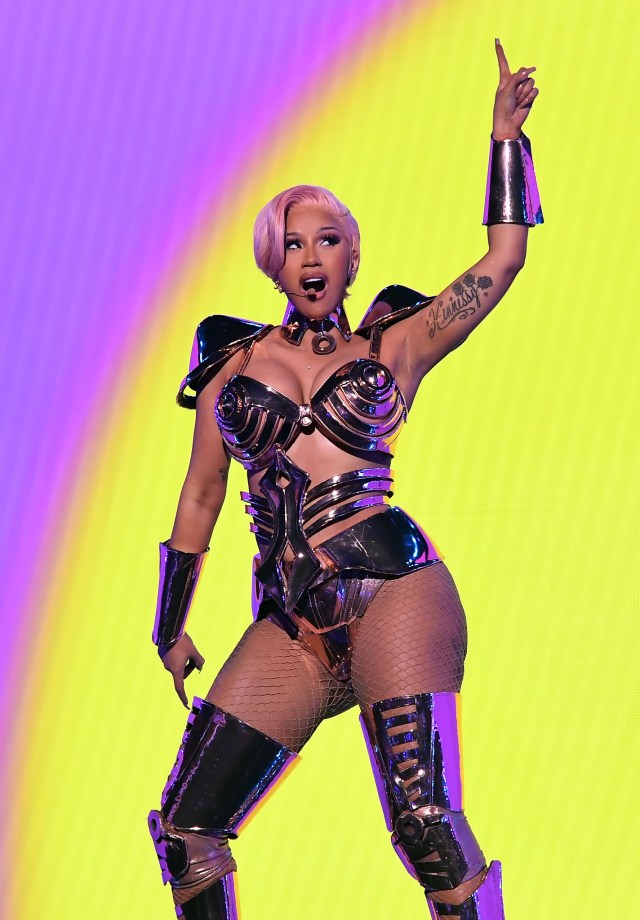 Cardi B  Kevin Winter/Getty Images for The Recording Academy

Lil Baby Makes a Statement on Police Brutality
Lil Baby gave the most ambitious performance of the evening with his song “The Bigger Picture,” evoking last year’s protests against police brutality. The performance, set on a nighttime street, opened with actor Kendrick Sampson getting pulled from a car by a policeman and shot; he was face-down on the street as Lil Baby launched into the song’s lyrics. Rapper and activist Killer Mike made a cameo, as did Tamika Mallory, who delivered a message for President Joe Biden; there were also protest signs and chants of “until freedom.” Toward the end of the song, Lil Baby rapped toward an expressionless police man holding a shield. The impact was undeniable, and a reminder that music isn’t about winning awards; it’s also about a call for change.

BTS Makes It to the Grammys, Via a Set Re-creation in Korea
Korean super-group BTS delivered a flawless (and much anticipated) performance of their hit “Dynamite.” Dressed in coordinating orange, yellow and cream Louis Vuitton suits, the always in-sync singers danced their way through a minimalist set, up a stairwell and onto a roof. (The filming logistics alone were impressive, not to the mention the group’s energy and dance technique.) But while it looked like the group was performing with the backdrop of the L.A. skyline, it was revealed afterward that the group wasn’t even Stateside: they’d re-created the Grammys set in Korea.

Get to Know the Grammy Nominees for Best New Artist