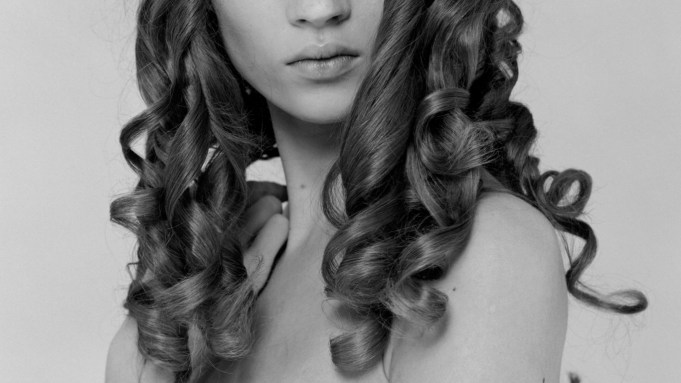 Bettina Rheims is to make a splash during Paris couture week.

The photographer is to take over three floors of Paris’ Maison Européenne de la Photographie with a major exhibit scheduled to run from Jan. 28 through March 27. An opening cocktail is set for Jan. 27.

It will mark the first major showcase for the 63-year-old photographer in her native city. “The exhibit starts in 1979 and ends just three months ago,” Rheims told WWD. “It’s a journey through 35 years of photography,” she said, noting it’s not chronologically organized.

While the first floor was designed as an introduction to her work — mixing life-size portraits and photos of her Pigalle strippers series from the Eighties — the second floor gives a nice play to fashion, from her commercial work to artistic series. These include her 1989 portrait of a topless Kate Moss; and her 1994 photo of Madonna wearing a Christian Lacroix dress. (Rheims initially shot the pop singer for Details magazine and Madonna ended up using the picture for an album’s jacket.) A 10-minute video documents Rheims’ striking editorials.

“I worked a lot with [stylists] Bill Mullen and Martine de Menthon. I most recently collaborated with a young stylist, Charlotte Collet, for a story that appeared Double magazine,” Rheims said, calling Collet “a very creative person who knows a great deal about contemporary fashion.”

Rheims also worked a lot with designer Jean Colonna, including for her “Gender Studies” series in 2011 that depicts transsexuals. Commenting on the current transgender trend happening in fashion, she enthused: “The more we feature [transsexual people], the more we give them access. It’s important.” She herself helped pioneer androgynous imagery in the Eighties through her work.

The third floor touts photographs from her “Heroines” series made with Colonna that includes the likes of Milla Jovovich, Dita Von Teese, Laetitia Casta and Lily Cole. “I was very fortunate that a couture house gave me mountains of dresses that were meant to be destroyed. I made a list of women — some whom I already knew, some I had been dreaming to photograph — and had them sit on a rock. Jean revisited these dresses, making them almost like sculptures.”

She continued: “When I was young, I wore all of his designs. Colonna’s woman is reminiscent of John Cassavetes’ heroine: she appears a little disheveled, extremely sensual, as if she had just made love.”

On her own fashion choices these days, Rheims said: “I always wear black or gray pants and white shirts. For evenings out, I wore Yves Saint Laurent tuxedos for a long time; today my tuxedos are from Pallas and I wear these black leather pants that I love from Stouls.”

A part of the MEP showcase is set to travel to the Fotografiska museum in Stockholm, Sweden, debuting on April 14 while another exhibit is in the pipeline, focusing on her “Shanghai” series — photographs of Chinese women in unexpected situations, torn between the culture they grew up in and a fantasized modern world. It is set for Shanghai and Beijing in late spring.

The release of a Taschen tome “Bettina Rheims” — priced at 59.99 euros, or $65 at current exchange, in addition to the limited edition that’s already out — is to coincide with the opening of the Paris exhibition.