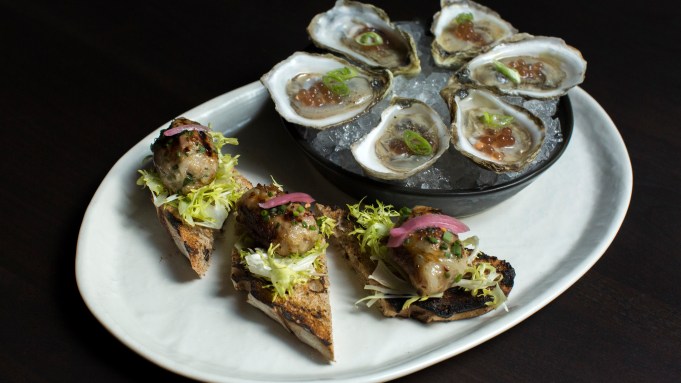 Hotel executives found their new chef a few blocks away at Rotisserie Georgette, from which they poached Chad Brauze to develop the menu for their retooled concept. “They just wanted to make it a little more of a New York restaurant, something that could stand alone from the hotel, something that can stand on its own merit,” Brauze explains, speaking with a slowness and calm that generally defies the high-pressure kitchen environment. “And really driven by the food — driven by the purveyors, the meats we select.”

While the menu at Bevy is billed as American, Brauze has incorporated his experience with classic French cooking and a sense of precision to the menu. The Columbia University and Culinary Institute of America graduate has trained in the nearby kitchens of Daniel and Per Se, as well as the more experimental-driven El Bulli in Spain. He most recently led the kitchen at Rotisserie Georgette, where he’s been since 2014.

“I mastered the chicken, I think,” says the Michigan-born chef. “I did the calculations once, and I think I cooked about 12,000 chickens.”

He has also spent his entire New York career cooking in restaurants dotting the hemisphere of Central Park South. “I’ve always aimed to work at a certain quality of restaurant, or certain caliber,” he explains. “I just kind of always ended up here [in the area].”

Brauze sourced his ingredients locally, culling from the roster of providers he’s worked with throughout his career. “My focus is just to have really tasty food from people I trust, products I think are really awesome,” he says. “I could take all of the people I’ve met through the years — the lamb purveyor we used at Daniel, the vegetable guys we used at Per Se, and all of the fun things I learned at Rotisserie Georgette, and bring it to here.”

The menu at Bevy incorporates whole chicken from a Mennonite farm in Pennsylvania where chickens are raised to two to three times the normal age, a biodynamic dairy from the Hudson Valley and fish from small Montauk operations. Mushrooms are installed next to a curry-tinged yogurt sauce and fluke tartare has a moment with dill pollen. But it’s not all light fare — bourbon brined herb stuffed whole chicken and a 40-oz. ribeye are options for heavier eaters (and are meant to be shared).

Located on the third floor of the hotel — the lobby level — Bevy is the result of a complete remodeling and revamp, with a dining room defined by marbled gray tables, velvet upholstery and wood overlooking 57th Street. The room’s centerpiece is “Swarm 11,” a lighting installation designed by London art collective Random International that hangs above the restaurant’s bar. Rods, hanging in a cubic arrangement, light up to mimic the movement of a swarm of birds.

“It’s the anchor for the hotel. We got lucky, we got it in the restaurant,” Brauze says of the artwork. (Random International designed the popular “Rain Room” exhibit, shown at MoMA in 2013.) The piece also informs the restaurant’s name and general ethos.

“If you think swarm, Bevy is a swarm,” Brauze continues. “It’s kind of just a bunch of people heading toward the same goal. So it ties in purveyors, wine makers. It’s not just the chef and service team, it’s everything together. All of us try and find the people that we love, and incorporate that into it.” 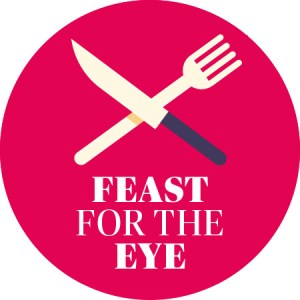