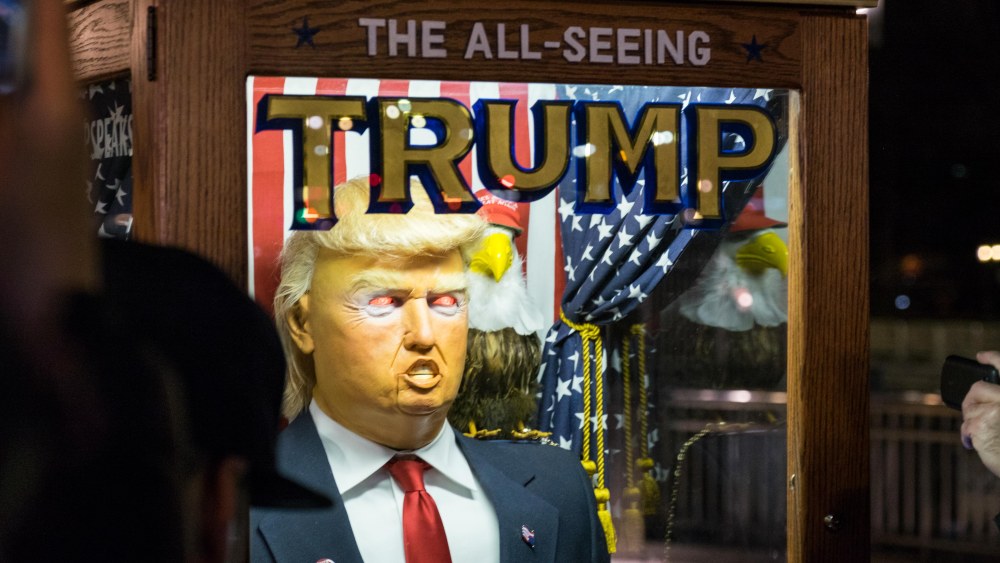 NEW YORK — A crowded rally backed with major star power — a stark contrast to the lineup for the impending presidential inauguration — was well underway at 6p.m. on Thursday, the eve of the inauguration, outside the Trump International Hotel in Columbus Circle.

Thousands were predicted to show. On the evening before the march, de Blasio tweeted a reminder to his 71,900-plus followers: “Tomorrow. 6pm. Trump Int’l Hotel. Let’s send Donald Trump off to DC w/ a message that we’re going to protect the values that make NYC great.”

Around 1 p.m., the scene outside the hotel looked like any other day since Nov. 9: barricades and roadblocks galore, an amped-up police presence and passersby whipping out their selfie sticks. No less than three people were spotted taking selfies with their middle fingers up in front of the Trump insignia.

But by 6 p.m., hundreds had gathered peacefully in the streets.

After calling Trump a bad example of the country, DeNiro took to the podium, joking to the crowd that President-Elect Trump would probably tweet insults about his acting career in the middle of the night. “Just like our founding fathers, you can love our country, but not love everything about it,” he said.

Moore spoke a while later: “As bad as we think it’s going to be, it’s going to be worse. That’s the truth, my friends, and I’m sorry to have to begin on such a depressing note. But here is the good news: The good news is, there’s more of us than there are of them… More than 10 million voters said no to Donald J. Trump. What Mr. DeNiro said about this great city, and how sad it is that this man represents not just this city now, but the country — well, he does not rule with a mandate. Keep this in mind, in your moments of despair, that you are not alone. We are the majority. Don’t give up. I won’t give up.”

Baldwin was next up, slipping in and out of his “Saturday Night Live” impersonation of Trump. But then he got serious. “Donald Trump, Steve Bannon, Mike Pence — they think that you are gonna lay down,” he said. “Are you gonna lay down? One thing they don’t realize is that New Yorkers never lay down. You say whatever you want to about this city, but are you gonna fight? Are we gonna have 100 days of resistance?” he said. “My wife and I have three little children, and to all of you that have children — it’s never too early to teach them, to a degree, about what’s happening here, to teach them about what a real American is.”

Protesters brought out their best one-liners, holding up signs scrawled with everything from “Putin’s puppet” to “You can’t comb-over climate change,” “Love and kindness,” “Orange Revolution,” and “Billionaires, tiny hands and grizzly bears, oh my,” the latter a jab at Betsy DeVos, Trump’s education nominee.

Elsewhere, two women held hands as they marched, one holding a tote bag printed with an image of Barack, Michelle, Sasha and Malia Obama on it.

“I think we’ll be alright,” said the other. “I’m the first to admit that he’s out of his mind, but I think we’re gonna be OK.”