Inside the Theatre at Ace Hotel's ticket booth, butcher-turned-florist Amelia Posada has a knack for mixing textures and colorful plants. 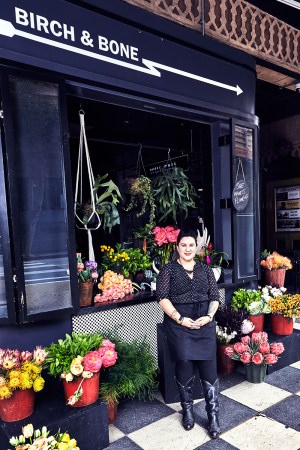 Downtown Los Angeles has been undergoing a major cultural makeover the last few years, but nothing compares to the changes that have taken place inside the ticket booth fronting the Theatre at Ace Hotel.

On a recent Wednesday, when the sky exuded the same shade of gray matching the concrete blocks, Amelia Posada was busily freeing bundles of flowers from the rolls of newspapers used by the Los Angeles flower market vendors as makeshift vases. Dressed in all black, with cowboy boots scraping gray tiles underneath, she gave a mini tour of petals, ferns and vegetation that are textural and unusual enough to spruce up Willy Wonka’s house.

Vibrant pink clusters of queen protea are closed tight as if still hung over from a night of partying. Ivory cabbage leaves are stuffed into a red pail with piles of mint. The blue thistles and purple vanda orchids match not only the ink art on Posada’s arms, but also the theater’s rainbow-colored marquee promoting an upcoming show for Catvideofest.

“The transition from will call to Birch & Bone,” Posada said, tossing clipped stems behind the counter.

Glancing at what resembles a calla lily wearing a high collar etched with scarlet veins, she said, “Those are carnivorous flowers called cobra lilies.” A more docile alternative is a white tulip with ruffled edges. “When they open up, they look like porcelain,” she said.

On the other hand, Posada concedes to knowing little about orange ball trees, which look like marigolds morphed into honeycombs with sage-like leaves. “These I’ve never heard of or seen until today,” she said. And the 33-year-old is fine with not being a know-it-all. “I’m always looking for things out of the ordinary that I’ve never seen before,” she said. “I’m constantly trying not to get bored or used to something.”

Posada’s approach to assembling bouquets matches her philosophy for living life. When she was 14, in her daisy-loving phase, she often ditched school to work at a flower kiosk in Montecito, Calif., a bucolic town south of Santa Barbara. Throughout her years of studying journalism and Latin American studies at Brooklyn College, she presented pretty sprays of sweet peas, silver cups, white roses and hydrangeas to Upper East Side ladies and Saudi royals who frequented the St. Regis and Four Seasons. Then she spent a year studying with master butchers in upstate New York in preparation for opening a meat emporium in Los Angeles with her then-girlfriend. After four years of carving pastured and organic meat at Lindy & Grundy, followed by six months to heal a fractured heart from the breakup, she got herself back down to the city’s flower market.

Since launching Birch & Bone in February 2015 and opening her shop in the ticket booth a little over a year later, she’s become a favorite florist not only of the hotel, but also of the fashion and media crowd who likes how she layers texture into plants. Rachel Zoe, Vanity Fair and Obsessee have tapped her to brighten their Coachella parties in the desert with colorful flora. She’s also conveniently located a few blocks away from L.A.’s fashion district, where bloggers often sneak photos of her burgundy ranunculus, painted sponge mushrooms and moss-covered pots of succulents that resemble fishhooks and curlicues. The bros who frequent the neighborhood on foot or skateboards also like checking out her build-a-terrarium bar, which is stocked with colored glass, pyrite, rose quartz and pointy air plants.

Posada’s background as a butcher comes in handy, too. For instance, she incorporates bleached cow bones and antlers into romantic centerpieces stacked with geodes, blood red amaryllis and rounds of birch. For a couple who used to go to her meat shop, she’s twisting wish bones into boutonnieres for their wedding next year at a vineyard up the California coast.

Posada sticks with her different aesthetic, even if it might alienate her from the local floral scene that emits a catty vibe under the girlie blooms. “I’m the tattooed funky florist,” she said. “I like crazy flowers from South Africa and Australia and Hawaii.”

Through word of mouth and Instagram, a community is growing around her. She’s led workshops for CB2 and SoHo House. One of her favorite customers, who lives down the street in an Art Deco loft, hired her for a job on behalf of Warner Bros. Another regular asked her to create a floral backdrop for the graphic art he’s designing for a record album.

“I’m a total yenta,” Posada said. “I love people. I love networking. I love connecting people to do business or be friends.”

In the next year, she hopes to expand her business by launching her own line of home decor, including vases, which, she promised, will “definitely be funky.”

“I love a peony, too, but in general I’m more inspired by the textures that live around me,” she said. “I’ve always had a knack for putting things together.”