Birch & Bone’s Amelia Posada: How to Create a Bouquet for Summer Barbecues

Florist Amelia Posada gives tips for a unique hostess bouquet that can withstand the heat with protea, dianthus, billy balls and ferns. 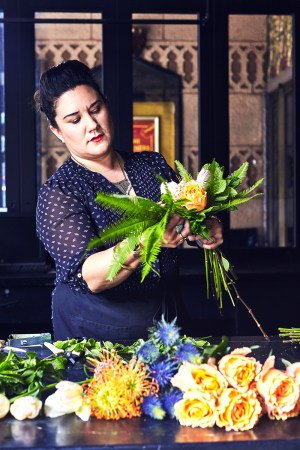 ‘Tis the season for summer barbecues. Other than cold beer, a popular gift for a hostess is flowers. When temperatures spike, though, delicate flowers often don’t hold up at outdoor parties. Even in a vase, they would wilt in two hours.

Hence, explained Birch & Bone founder Amelia Posada, it’s better to pull together something hearty and unusual that not only will last a long time, but also make an impression.

Posada, who operates her flower shop inside the theater ticket booth at Ace Hotel Downtown Los Angeles, suggests layering three to five pincushion protea inflamed in orange or yellow hues with some green dianthus and yellow billy balls. Fern stems, like those of the green tree or plumosa varieties, add a swoop of greenery. Little pods like bell cups can give some texture. For overachieving guests who are on a do-it-yourself kick, the bell cups take well to a coat of acrylic paint in a shade that would flatter the vivid flowers. Old textiles do the trick for serving as a wrap to set the bouquet apart from the flowers brought by other guests, she said.

“This is a bouquet that can withstand the summer heat, and also last a full week looking perfect,” Posada said.