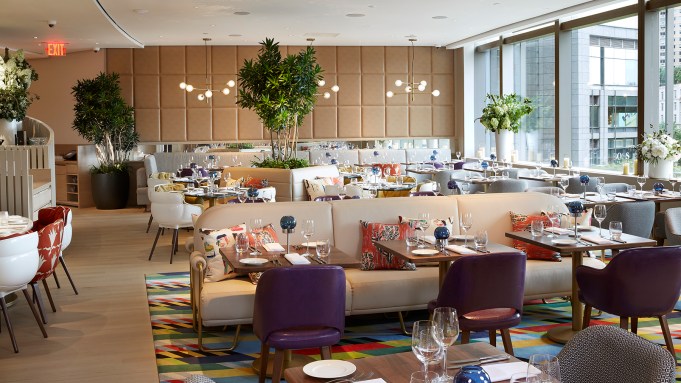 The first of two New York locations of the British restaurant opened this week at the Shops at Columbus Circle; the second is scheduled to open in March at the Hudson Yards. “We’re coming to New York because we think it’s a natural thing for Londoners to do,” says D&D London ceo Des Gunewardena. The synergy between the two cities is underscored by Bluebird’s New York origin story: a fortuitous run-in with [Hudson Yards developer] Related Cos.

“It was a happy coincidence, because the Related guys were in London talking to guys like us about doing something in Hudson Yards. So we thought, ‘wow, this is an amazing development, we want to be part of that.’ It’s incredible what they’re doing,” says Gunewardena. D&D invited the development group to have a drink at Bluebird in London’s Chelsea neighborhood, and the restaurant group was persuaded to not only open a location of the restaurant concept in Hudson Yards, but on the third floor of the Shops at Columbus Circle, as well.

“So, here we are,” says Gunewardena.

The restaurant at Columbus Circle, which plans to cater equally to morning, afternoon and evening crowds, features three distinct dining concepts that flow seamlessly together in one space. Visitors enter through a casual all-day café and pass through a cocktail lounge, before making their way to the airy dining room. The restaurant took design cues from the early Beatles era in London, incorporating lots of color and mixing fabrics, taking a lighter aesthetic than its previous tenant. Actual olive trees in the dining room reference the view, which looks out on southern Central Park. “The original Bluebird has six magnificent trees in it, so we’re trying to connect to what happens there,” says designer Nancy Ruddy. They also connect the restaurant to its original location through framed imagery of the Bluebird Race Car and its driver, Sir Malcolm Campbell; the original restaurant is located in the former garage where the race car was built in the Twenties. (There’s also bird decor; the bluebird is New York’s state bird, after all.)

The kitchen is led by executive chef Nicolas Houlbert, formerly of Bar Boulud and Epicerie Boulud, and the menu highlights the diversity of British cuisine. “We’re going to bring you food that we eat in London, and clearly there will be a British accent to it,” says Gunewardena. That British accent will show through benchmark offerings such as fish and chips, afternoon tea and Beef Wellington, as well as dishes that incorporate elements of London’s international restaurant landscape. Not to mention the accent of the Bluebird car dessert, a chocolate cake shaped like the eponymous race car that broke land-speed records in 1925.

“If you can eat it in five seconds,” Gunewardena jokes of the dessert, “we’ll give it to you for free.”